The concept of procedurally generated games has become far more mainstream on the PS4 than ever before. More and more games are using this as a means of creating seemingly infinite worlds that offer more value from the experience.

Songbringer is the next game in that line. As a procedurally generated action-game with dungeons, a unique generation system, roguelike elements, and a ton of style, it's got a lot going for it. Does this game bring a song you can dance to? We're here to find out!

Give Me Six Letters, and I'll Give You an Entire World

One of the first things that really jumped out at me when I played Songbringer, was the means by which worlds were generated. When you start a new game, you are asked to provide 6 letters that will act as the seed for your world.

While I did random letters, I soon found out that you could spell out words. Let's say I created a world based on the word "PIZZAS." That world could be shown to anyone else with Songbringer by having them start a new game using the same six letters.

This means that particularly interesting worlds can be replicated by sharing the six letters that created them with other players. It also means that those who need help can look to others who used the same seed.

Design concepts aside, once you've created your world, you'll be thrown into Ezkera, which is the setting for all of these worlds. You are stranded on the surface after crash landing so hard that your shirt came off.

You are separated from the rest of the crew on board the starship Sonbringer and must find your way back to them while also stopping a catastrophic event that you may or may not have set into motion. This wouldn't have happened if he had listened to your companion droid, Jib, but now it's up to Roq to fix it.

With no shirt and a mysterious nanosword to defend yourself with, you'll set out to find your crew, kill demons, and return to Songbringer. As you explore the game's nine dungeons, more lore and story will be slowly revealed to you, but it's few and far between.

While the trippy sci-fi style won't be for everyone, I personally enjoyed the unique flavor that Songbringer brought to the table. Roq himself was irreverent and hilarious as he made simple comments on the events happening around me.

It was funny to use a key I found to open the door in a dungeon, only for Roq to simply say "badass." The casual and comedic tone was refreshing, as most games in this genre tend to be very serious and focused.

I would have liked the more consistent story to keep the world engaging. It would have helped for those moments when you get lost trying to figure out where to go or what to do next.

While the game does take a lot of inspiration from the original style of Zelda, I think the unique story and the world here helps it stand out. More of it would have been welcome to help fill the long stretches of silence in the game's story, but what is here did a good job of mixing philosophy with sheer irreverence. The gameplay in Songbringer does take a little getting used to. The game does not encourage or even acknowledge button mashing. Your sword swings are deliberate and slow. The top-down viewing angle also took some getting used to as I needed to judge the distance between enemies and myself.

Once I had the hang of it though, I really enjoyed the smooth gameplay. The bosses provided a stiff challenge as well, while also offering unique designs and strategies.

Songbringer has a steady, but fair difficulty curve that moves up slowly or quickly depending on the world you've created for yourself. For example, my world didn't have a lot of psychedelic cacti that are needed for healing, so I had to rely on health drops (known as courage) from enemies and loot boxes.

Other reports I've read from different worlds reported plentiful healing items. This is where procedural generation can bite you in the end. While it offers a lot of possibilities, it can also result in permutations of the world that are inherently more difficult because of the way they were generated.

The game also encourages a lot of exploration and experimentation. For example, eating those aforementioned cacti makes the screen fill with psychedelic effects that can reveal hidden areas.

Hidden areas in the overworld can also reveal items and shops. Furthermore, items can be combined to imbue your sword with elemental damage. It's important that you take the time to explore because you can even finish the game without seeing all of the dungeons.

At around ten hours, there's a lot to see and do here. There's plenty more if you want to try your hand at another world or several. The combat is satisfying, if a little simplistic, and the freeform exploration is cool, even if it's not for everyone.

For those who really enjoy being punished, there's even permadeath option to complete the roguelike experience. It all works pretty well, and while much of it may seem familiar, it also does enough differently to stand out from the pack. 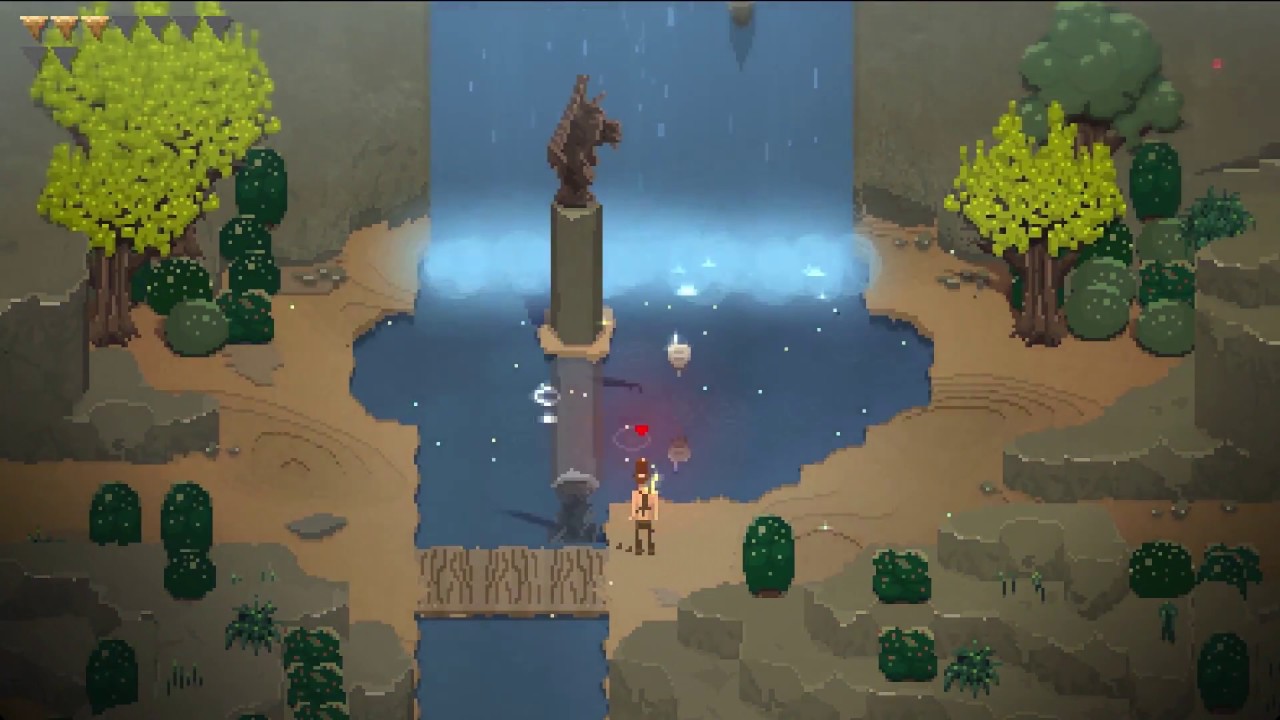 It's immediately obvious that Songbringer is a labor of love. Made by Nathaniel Weiss, it's a game that is oozing with style. The classic 8-bit aesthetic is both endearing and frustrating at the same time.

On the one hand, I loved the classic feel, but that also resulted in muddled areas where enemies would blend into the environment, or it wouldn't be clear where they were. It wasn't enough to ruin the experience, but it did show the limitations of the style.

There's a lot of little details that I like throughout my time with Songbringer. For instance, the fact that your sword's sounds come through the DualShock 4 speaker. It does a lot of things right, and even though it doesn't shake the foundations of the genre, it has enough unique features to make it worth your time.

If you like Zelda-inspired action adventure games, and you feel like your life could use a little more psychedelic philosophy and comedy, Songbringer will be an excellent addition to your library.