As I sit down to write this review, my heart is racing, I'm drenched in sweat, and I have a giant grin on my face. I just finished a marathon session of Sparc on PlayStation VR. This new virtual sports game from the developers who brought us Eve: Valkyrie is a simple, but extremely fun title.

Initial impressions are very strong, but does Sparc have enough longevity to burn bright, or does this star burn half as long and twice as bright? Join me as we discuss this unique VR sports title.

Excuse Me, You Got Some Dodgeball in My Tron

The premise behind Sparc is a 1v1 virtual sports title that mixes elements of strategy, accuracy, and reflexes into a slick sci-fi setting. There's no story or explanation for the game's arenas and competition, but a narrative isn't the focus here.

Instead, this game is about quick and satisfying competition. Single player offerings are minimal. A short and concise tutorial leads into challenges you can do on your own to hone your skills.

There's no single player A.I combat or tournament mode, which does seem like a bit of an oversight. Obviously, competition with other human players is the most satisfying, but without any meaty single player content, the game's success hinges almost entirely on the dedication of its audience.

If people continue playing long into the future, the lack of single player modes is a non-issue, but if the player count drops, then Sparc loses a majority of its gameplay.

Thankfully, the post-launch audience has been strong. I was able to jump into advanced matches with almost no wait. I did have some trouble finding a match for the beginner's basic mode, but I imagine that's because people have moved into the more advanced modes since launch.

From a content perspective, Sparc has its single-player challenges, three online modes, and a good selection of customization options for your character. The area remains largely the same unless you're participating in the experimental game mode that changes things up.

It's a little light, but there's no reason why the developers couldn't add more content down the road. Honestly, the only thing I would have liked to see would have been some sort of single-player tournament mode or even just bot matches to ensure you can always play into the future.

That's the setup, now let's talk about how Sparc plays. 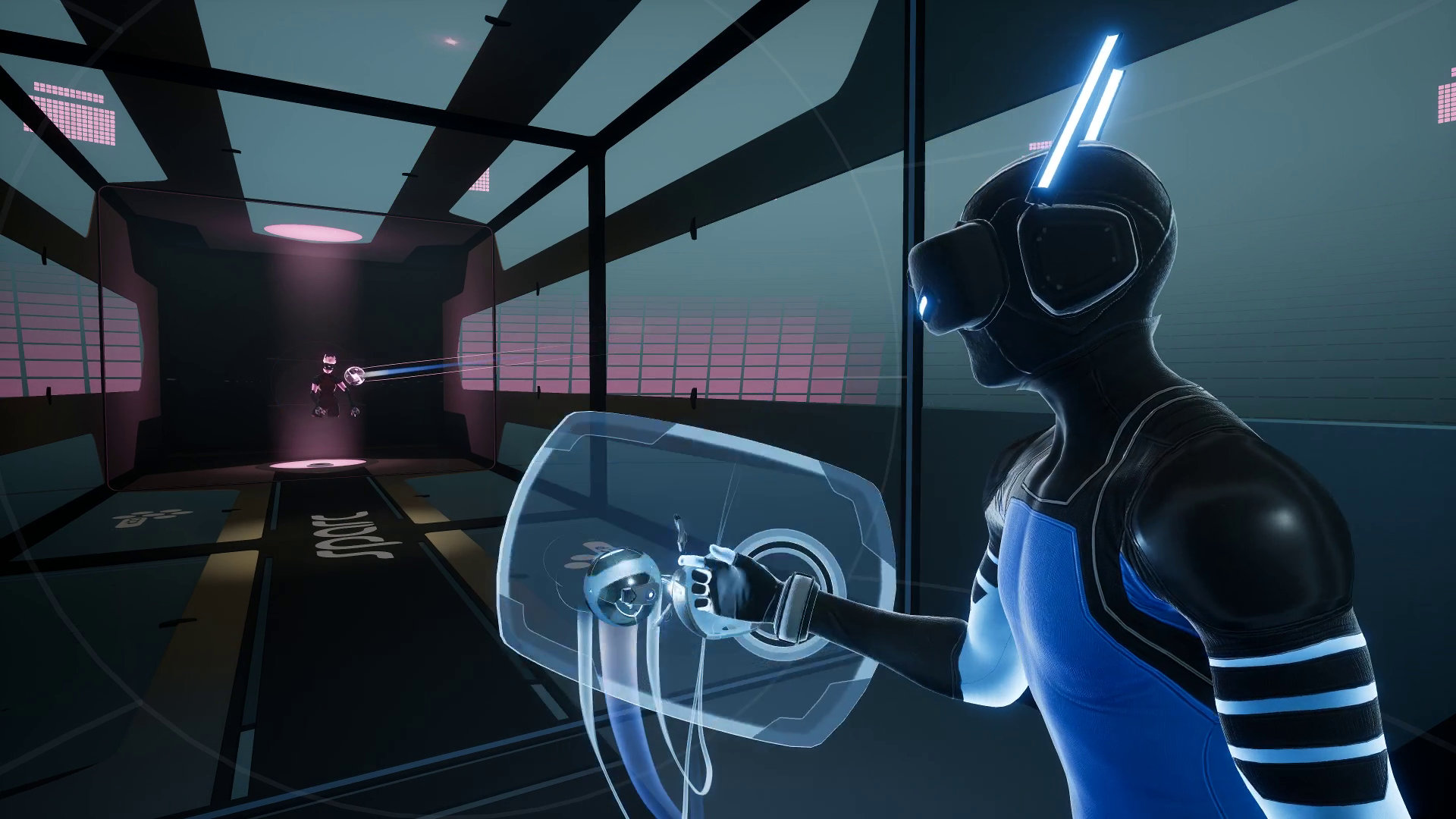 One of the most amazing things about VR, is its ability to offer both passive and active experiences. Some games you sit down, and some games you stand up and move around.

Sparc falls firmly into the latter category. You'll need to stand up, limber up, and get ready to sweat while playing this game. During a match, you'll stand within a play circle that designates how far you can move in the real world.

It's smart because it keeps you from charging into your TV and warns you when you're about to exit the space. To win a match in Sparc, you need to hit your opponent directly to score points. Each game lasts up to three rounds before a winner is crowned.

In the basic mode, you'll have knuckle guards that allow you to punch your opponent's ball as a means of defense. In the advanced mode, these guards are removed.

Instead, you'll need to hold your ball in one of your hands to generate a shield. It will deflect an enemy's ball once and if the deflected ball hits them, you score a point. To recharge your shield, you'll need to throw your own ball to try and score.

This is the beginnings of Sparc's strategy. By throwing your ball, you leave yourself open for attack. Sure, you can duck or dodge the incoming enemy orb, but if it hits the space behind you, they earn a strike.

Strikes make their ball larger and faster until they manage to hit you with it, at which point it resets. Finally, there's the experimental mode, which offers a unique arena set up and potential for even more complex and intense gameplay.

Sparc requires the PlayStation Move controllers, which allows you to make precise throws and richochet your orb off the walls, floor, and ceiling. Throwing with the Move controllers feels great. Sparc's controls are some of the best I've felt in VR, and the smooth online play meant that I never felt cheated as a result of glitches or lag.

Throwing, catching, dodging, blocking, all of it feels fantastic. When you're not in matches, you can also spectate as a giant version of yourself looking down on the arena below you. Other players appear around you as well.

The match happening in the area below is really cool to watch, as you see mini avatars playing in real time beneath you. When you're actually in the arena, you may even see other players towering over you as they spectate.

As far as content is concerned, Sparc could use more arenas, some single-player options, and maybe a couple more modes. Be that as it may, I cannot deny that the game is an absolute blast to play. If you have a competitive gene, you'll get your $30 worth and then some pretty easily.

Playing Sparc on PS4 Pro, the graphics are excellent. The environments, while simple, are sharp and clear. Furthermore, the text is crisp and easy to ready, which I really appreciate in VR.

During matches online, I never noticed any lag or hitches in the frame rate. The gameplay was smooth and responsive. The blast of light that emanates from the orbs as they collide with walls or shields is extremely satisfying.

The tactile feedback from an impact with your opponent's orb is excellent, and the overall rhythm of an intense match is nothing short of exhilarating. Sparc is an excellent virtual sports game that really gets your heart pumping.

As usual, the added element of VR makes the matches feel immersive and absolutely pulls you into the moment. Beyond my desire for single player content and more multiplayer options, I really can't find anything else to critique about Sparc.

Competitive players should look no further, and those who want to get a little more physical with their VR experiences should also take a look. This concept sparks a blaze that I hope burns long into the future.