When you think about emotional games, a few often come to mind. In fact, a lot of them may be indie titles that took a simple concept and attached an emotional weight to it that you weren’t expecting. Most often they feature silent protagonists, a moving soundtrack, and a story that grips at the heartstrings.

Spirit of the North certainly feels like a game that could fall into this category. You play as a fox that soon finds itself on an epic journey into ruins, over mountains, and into deep caverns. With a spirit to guide you and empower your abilities, you must fight back against a corruption that has taken hold of the land. Should you journey forth, or will this heartfelt journey leave you feeling hollow? Let’s find out.

A Journey of Highs and Lows

The creators of Spirit of the North made a creative decision to tell their story without any words. Other than barks, this fox won’t be narrating a tale of spirits and shaman to you, but plenty of games have done this with successful results. For me, a story without words needs to convey things visually and back them up with music that supports the emotions of the moment.

The story in Spirit of the North is really about a fox and this spirit that you work together with in your mutual goals. There are several major events in the game that offer emotional impact, but the story largely leaves itself to the imagination. You can find murals that depict simple scenes, but in my opinion these never offered anything significant about the world or the people they depict.

There is a very clear antagonist in the form of a red corruption that becomes more apparent as you play. There’s also this great sense of mystery and intrigue when you encounter crumbling ruins and ancient structures. It all hints at something deeper and greater, but the game never really touches upon anything besides what’s in front of you. I wish the story had gone deeper, even if that meant silent visions or more detailed murals for you to digest. It all just feels like a world that has a story behind it that I want to experience.

As it stands, the game does tell a cohesive story from beginning to end, but it feels very surface-level at times, and teases something greater than never comes to fruition.

I will say that there were a few times when I felt a pang of heartache in the game’s story, but I never felt true emotional connection or anguish. Perhaps that was never the goal, but Spirit of the North feels like a game that could engender those feelings in you if it gave you more of a reason to become invested in its world and the characters.

In terms of gameplay, Spirit of the North goes the extra mile in a lot of ways. For starters, these kinds of games are usually pretty simplistic. Sometimes they have small puzzles, but they are mostly about exploration. Where Spirit of the North falters in story, it makes up for with a nice progression of abilities and mechanics. By the time you finish it, it feels like a meaty experience from a gameplay perspective.

While you don’t start out with anything special, you’ll soon gain abilities that let you interact with the environment, cleanse the corruption, and navigate some interesting environmental puzzles. One thing that did grate on me as the game went on, however, was how you “charge” your abilities.

Certain actions require you to find and absorb energy from blue flowers in the game, which is then expended when you perform said action. It’s not like this for every ability, but in many cases I had to backtrack to grab another ball of energy repeatedly as I made progress.

The idea of gathering specific items to charge your abilities is totally fine, but the placement of them should ensure that you never have to spend significant time running back to use a location you’ve already interacted with. To me, this was where the gameplay became tedious.

This also applies to the sprinting which for the vast majority of the game makes you feel like you’re playing as Alan Wake’s pet fox. Suffice to say, you get winded very quickly, which is frustrating when you’re doing a timed puzzle or trying to cross a vast expanse in the game’s world.

Given the size and scope of the game, some environments don’t offer a lot reason to explore and therefore having to stop and start your journey through them because of limited stamina or backtracking to find flowers takes away from what would otherwise be a satisfying pace.

One thing I will add, however, is that a system of collectibles that only becomes mandatory in a few cases does offer you a reason to explore. You can find and pick up shaman staffs in the game world that must then be taken to skeletons off the beaten path. Doing so will free the spirit, completing the task. There are over twenty of these to find (28 total, I believe), so that does give you a reason to stop and smell the roses.

The only other issues I ran into with Spirit of the North were technical in nature. The most egregious one was when I would run down a straight path to make a long jump and on occasion the fox would hit an invisible wall and stop completely. It didn’t always happen, but it did happen a few times in different areas to the point where I was getting very frustrated.

Even when the platforming does work, it can still feel floaty in nature. Using things like geysers to launch yourself into the air is fun, but once you go airborne you have almost no control over where you land, so you’ll need to position yourself accordingly.

The developers have already patched the game once and encourage feedback for future patches, so it’s entirely possible these will be a moot point down the road, but the issue with getting a running start on jumps did cause more frustration than needed in my playthrough.

A Beautiful, if Empty, World to Explore 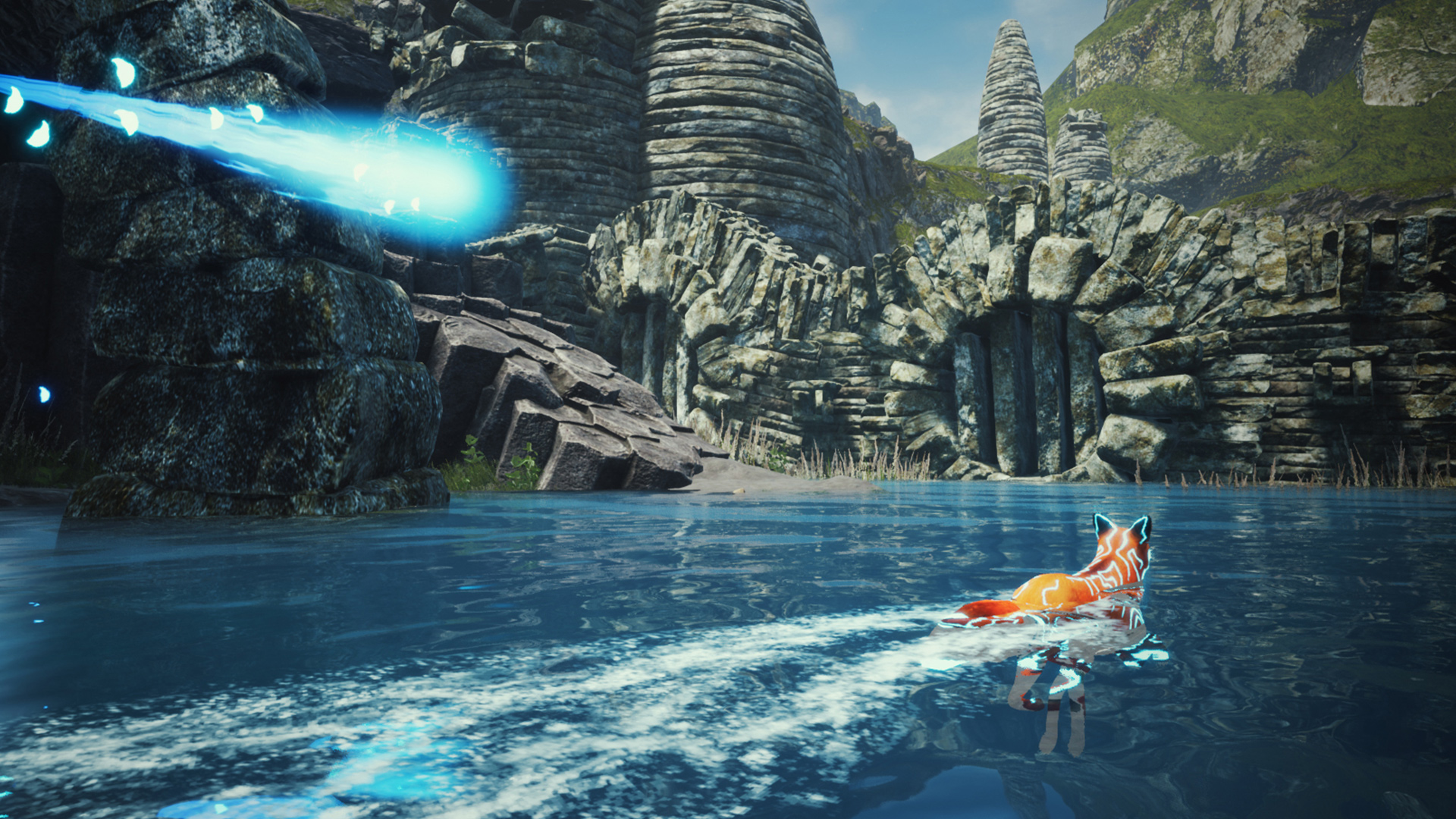 Spirit of the North has an excellent graphical presentation from the moment you press start. The game is filled with sweeping vistas, mystical particle effects, and plenty of impressive details. Perhaps the most impressive is the fox itself, and rightly so. The level of detail on the fur, from the way it sways in the wind, to the way the fox shakes itself off after getting wet, all of it looks great.

I also loved how, if you leave the game inactive for a time, the fox curls into a ball and goes to sleep on the ground. One of my dogs actually sleeps like this, so it was a nice surprise to see the little guy catching some Z’s when I left to do something and came back.

While the environments do look impressive, they rarely have much going on within them. Much of the impressively large areas are empty space, which feeds into the feeling that there could have been more to this world.

Finally, the music is another high point in the presentation. There are some lovely arrangements that combine to create a mystical atmosphere filled with curiosity and adventure. I would have liked to see more variety in the soundtrack to give the game an extra layer of emotion, but there’s no denying what is here is great and pairs well with the experience on screen.

Spirit of the North is an interesting beast. It has a few cracks in the armor that keep it from truly blowing me away, and I would love to see a more deep dive into this world, but there’s no denying that what is here looks great and plays really well for the most part.

Fans of atmospheric adventures should take a look, even if the game didn’t tear out my heartstrings, it kept me engaged until the end, and offered a journey worth experiencing.

A copy of Spirit of the North was provided to PS4 Experts for review purposes.