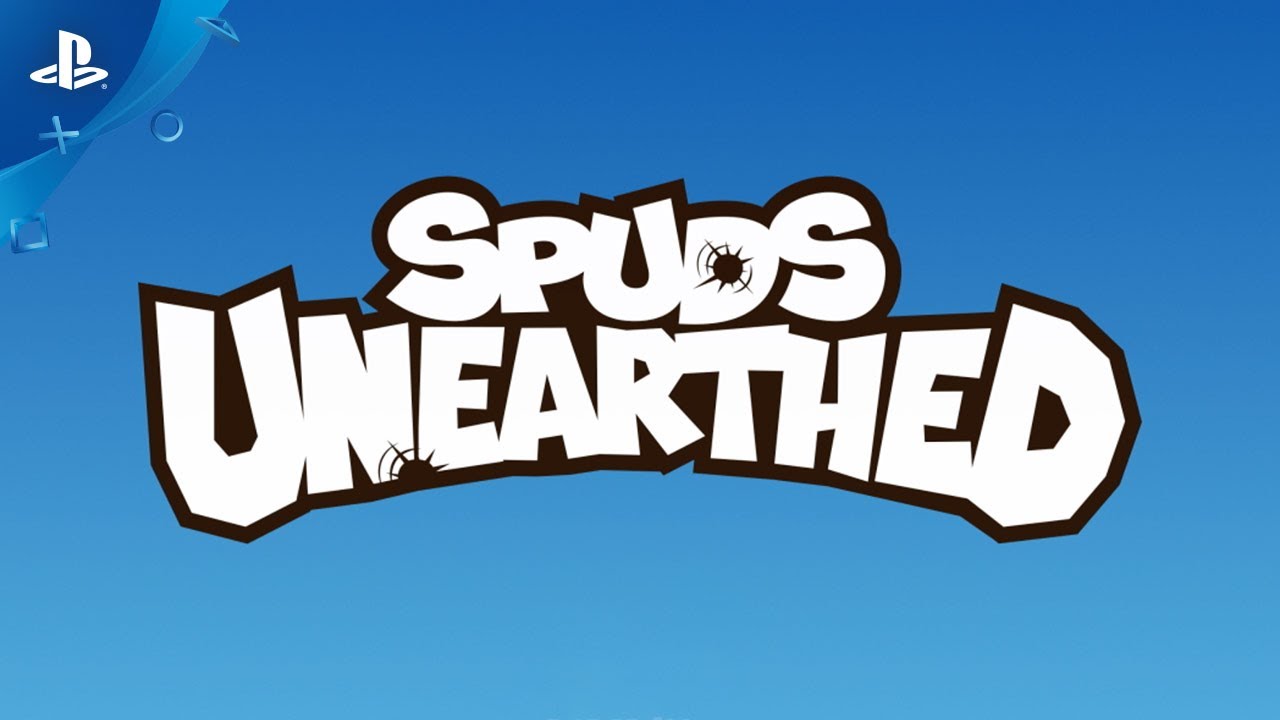 Taking a risk in the game industry is a bold move, but it can pay off in huge ways. When I saw Spuds Unearthed for the first time, I could see the potential for a really unique experience. I don’t know where the idea came from to make potatoes and their zombified counterparts the main characters, but it works!

This new action game for PSVR borrows elements from the MOBA and RTS genres and offers several ways to tweak your strategy and grow your heroes that help you win battles across the cosmos. Does all of this come together to offer the gaming equivalent of the perfect baked potato? Or, could this spud have used a little more time in the oven? Let’s find out.

Spuds Unearthed actually has an interesting concept behind it, but the game lacks any kind of story of narrative when you’re actually in the game. Online pages describe the loss of the Spud’s home planet, and the Zombuds that have formed as a result of being cast out into the universe and separated from their civilization.

The goal of the Spuds is to reunite their civilization and leave their history of conflict behind them. You are supposed to be a hero that has discovered AI robot hands that can be used to help the Spuds in their endeavor.

I learned all of this from the store page. None of these things are communicated in the game. You’re simply thrown into the hub area with some text slides that give you a basic understanding of the controls and concepts at play.

A charming or whacky story to accompany the game’s missions would have gone a long way towards helping you care about the potatoes you’re sending into battle. They have some level of personality on their own, but without context there’s no real narrative here to give you purpose and motivation.

Given the style and solid animation, a story would have gone a long way towards helping the experience feel complete, but it’s unfortunately not the only missing element here.

The mechanics in Spuds Unearthed all have a strong foundation, but the tutorial in the beginning doesn’t go deep enough in explaining everything. The ability to assign units to one of your three slots, upgrade their abilities, and customize your turrets are all around you in the hub area, but for many it will be a process of trial and error figuring out how everything works.

Heroes will walk around the hub area, allowing you to pick them up and place them on your dashboard. Upgrading them involves placing them on a machine to your right, placing a token you grab from one of the other Spuds into the slot, and pulling a lever.

I like the fluid and dynamic nature of the hub area as it helps the place feel alive, but I would have liked things like heroes and tokens to be readily available to the player, as opposed to letting them wander around where you need to grab them to utilize them.

The two turrets in front of you are easier to customize as you can lift them up and adjust levers to change the ammo type and firing mechanism. We’ll go into detail about how all of this works in battle shortly.

The tutorial slides are also mapped to appear each time you press the triangle button on the Move controller. This means you’ll be thumbing through the slides a lot as you accidently bump the button.

The other face buttons allow you to rotate yourself, or move up and down. The ability to adjust height on-the-fly is a welcome addition that I was very happy to see. When you’ve finished getting used to everything in the hub area, you’ll switch to a galactic map to go on missions.

Grabbing planets and placing them in the main slot is easy and intuitive, but not all of them represent viable missions. There’s an online component where certain planets will be controlled by other players, in conflict, or abandoned entirely.

All of this is fine, but it doesn’t have a lot of bearing on the gameplay, and ultimately leaves you to guess which planets you can go to for missions. A black hole of sorts will also appear in the center of the map, allowing you to move to another part of the universe and seek out different planets.

Incorporating other players is a good idea, but it should have been a more comprehensive mechanic. Real-time online multiplayer, for example, could have been a nice feature since there’s no story to speak of in the missions.

The asynchronous multiplayer concept here is sound, but there’s no real stakes behind it. The ability to take planets from players could have played into a larger system where specific factions of players could wrestle control over the universe and reaped the rewards, but as it stands there’s no meat behind the concept.

When it’s time for missions, your grunts will automatically run out into the battlefield to attack the main targets. Your job is to keep your base from being destroyed by deploying your heroes and utilizing your turrets.

This is where Spuds Unearthed is at its best. I loved throwing out the heroes to help turn the tide while also grabbing and firing turrets into approaching Zombuds. The heroes are interesting as well, with my favorite being one that deploys a shield and blasts enemies back when they get too close.

The turrets are satisfying to use as well. You’ll aim them with one hand, and, on the default setup, crank a lever to fire like it’s a WW1 era machine gun. Bouncing between turrets, tossing out heroes, and managing the chaos of it all proves that Spuds Unearthed is a great concept at its foundation.

Little things here, like loss of tracking when you’re cranking the machine gun, or odd aiming when you throw your heroes into battle can cause some frustration, but the experience overall works pretty well.

Where Spuds Unearthed struggles for me is the lack of any real motivation to keep going. The battles are fun, sure, and the promise of new heroes and upgrades is nice, but without a story to keep me engaged, or any real stakes in the multiplayer, it just doesn’t have legs beyond a fun novelty.

Plenty of Options For Ideal Gameplay and Presentation 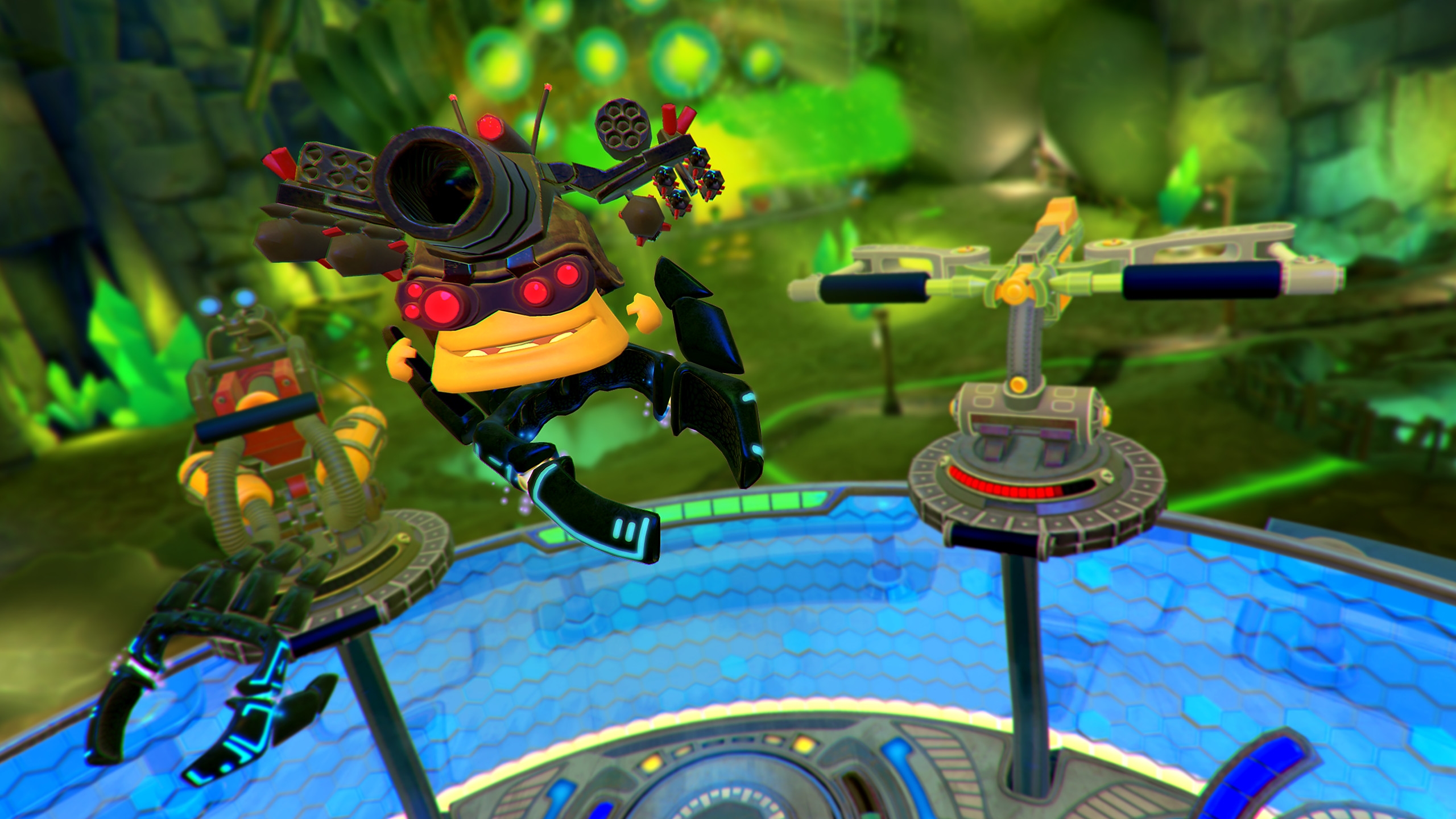 Spuds Unearthed has great options for changing your height in real-time, and rotating your perspective as needed. This lets you get a nice view of the battlefield without too much trouble. Its mechanics all work pretty well, but the lack of real explanation means that players will spend their first moments in the game confused on how to utilize the systems beyond the basic concepts in the tutorial slides.

Spuds Unearthed is a solid concept to be sure, but it’s missing so many crucial elements or depth that it ends up feeling largely like a missed opportunity to do something really unique. Perhaps some updates or a sequel could give us the meat to go along with these potatoes, but as it stands this meal of a game is going to leave you feeling pretty hungry.

A copy of Spuds Unearthed was provided to PS4 Experts for review purposes.