First-person shooters are a dime-a-dozen these days. They all try to have their own schtick to make them stand out. Some of them throw in some time travel, while others offer intense stories with deep atmosphere and RPG elements. SUPERHOT centers the whole game around its concept. In this shooter, time only moves when you do.

If you're perfectly still and not looking around, the world is practically frozen around you. Using this mechanic, you will solve situations that would be impossible at full speed. Does this mechanic make SUPERHOT an action movie's dream come true, or is this shooter stuck in place? Let's dive in and find out!

You Have to Try This New Game!

SUPERHOT's premise places you at a computer terminal as an unnamed hacker who receives a message from someone online telling him about a crack to this new game he found. The allure of an exclusive title that no one else has heard of is too much to pass up, so you jump in.

As you play through the game's levels, you hit several roadblocks that insinuate you shouldn't be playing this game. The story is told through chats with your hacker friend, and through messages that appear during the gameplay.

I can't say too much without getting into spoiler territory, but SUPERHOT is a game that rewards your imagination. The immediate story presented to you is really interesting and full of intrigue. By the time you get to the end, you'll have a lot of answers, but a few gaps will need to be filled in.

The information is there, you just have to hunt for it. Even if you just experience what the immediate game has to offer, SUPERHOT's story is engaging and satisfying without being pushy or in the way. It confidently portrays the events through clever text manipulation and messages during levels.

Could there have been more? Sure, but what is is here provides just enough intrigue to make you wonder what’s going on and where it’s all going. The digger you deep, the more interesting it gets. Once I was finished, I couldn’t stop thinking about how clever it all was. It may not be the most sprawling character-driven story imaginable, but it is memorable nonetheless.

Just like the gameplay, it takes a minimalist approach and manages to speak volumes while saying very little. Let’s take a look at the gameplay.

Time Only Moves When You Do 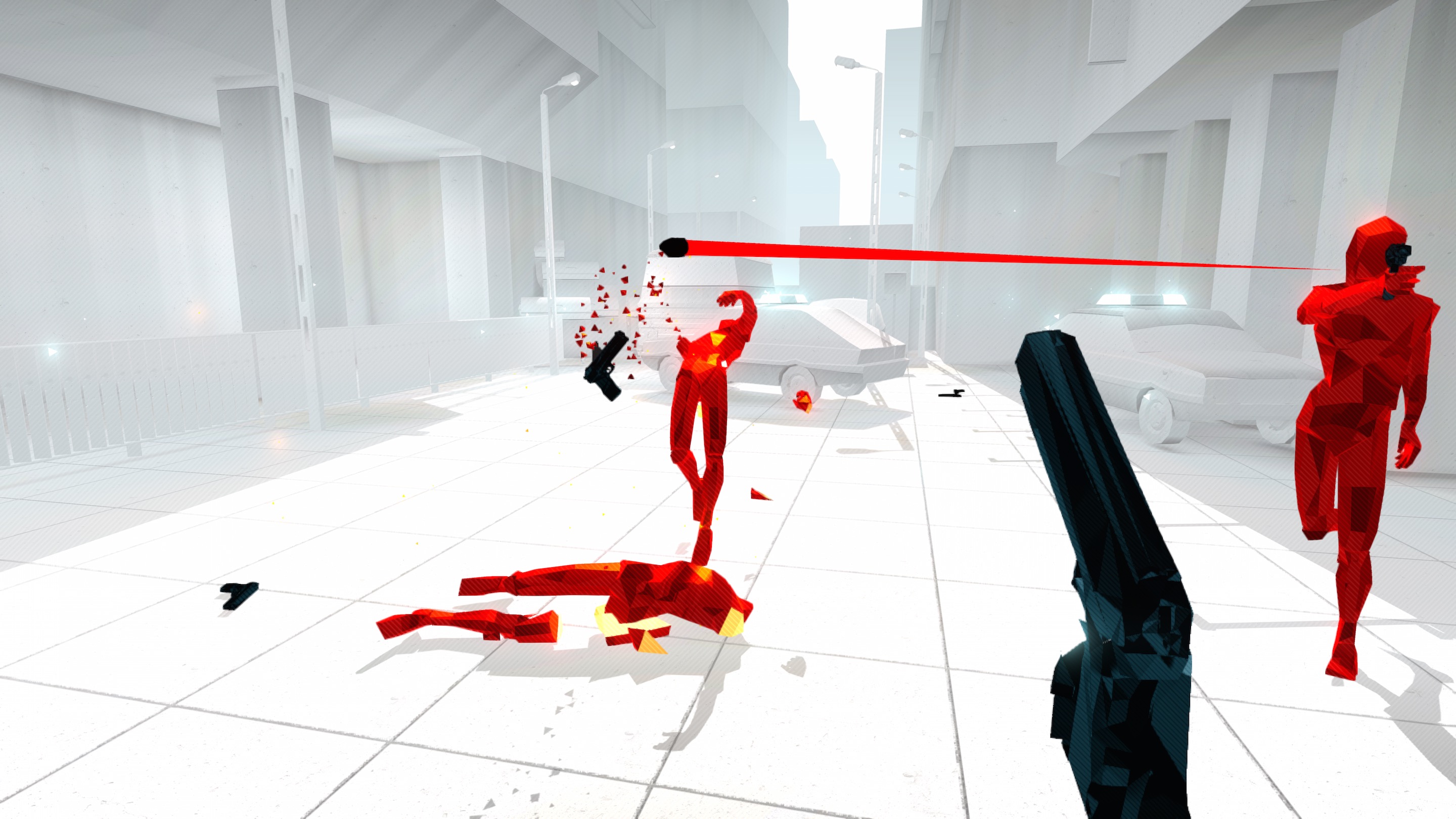 The main mechanic in SUPERHOT is the fact that time itself remains frozen when you’re perfectly still. You can only take a single hit, so you need to plan your strategies accordingly. The game throws you into a variety of scenarios that feel like they came out of the greatest action movies. With a flash of text on the screen, the level begins. Sometimes the enemies will be apparent, but other times they will come from around corners, or spawn as part of a subsequent wave.

Despite having control over the flow of time, SUPERHOT is still a game that depends on quick reflexes. Allow me to use one level as an example:

You start on the opposite side of a bar. The bartender is standing behind a row of glasses with a handgun raised to your face. He’s going to fire as soon as you move. What do you do? You can grab a glass from the bar and throw it into his face. You can rip the gun from his hand, or you can dodge to the right as the bullet explodes from the chamber.

In any case, he’s disarmed, but the threat is still real. As you turn around, he’s reaching for the gun. You run to it first and grab it before he can. With one shot, his head shatters like glass. You may think you’ve won, but two more enemies have entered the fray. One to your left, and one to the right.

You have two bullets left, so you turn to the left and fire, but it misses because the enemy is running and you didn’t account for his movements. You turn to the right and see a bullet soaring through the air towards you. One bullet left, but you can’t dodge this one. Another choice stands before you.

You throw the gun and it collides with the bullet in mid-air. Both shatter, but you’re alive for the time being. You turn back around and throw three quick punches to kill the enemy on the left. With another glass from the bar, you momentarily stun the final enemy so you can knock them down with another series of punches.

And then more enemies spawn. You’re not done yet.

This is the rhythm of SUPERHOT. It’s a constant battle of strategy, reflexes, and a lot of wits. Time may be moving at your pace, but that doesn’t make the game easy. As the levels go on, the difficulty continues to climb. Thankfully, a quick press of the triangle button takes you through a short loading screen before you’re back in the action.

As I described in my example, SUPERHOT allow you to use several different guns like pistols, assault rifles, and shotguns. You can also grab and throw any objects, including guns, to temporarily stun enemies.

Melee weapons include baseball bats and katanas. Guns will have limited ammo, and melee weapons will have a short cooldown before they can be used again. Both cooldowns and reloads happen as you move in real-time, so don’t expect to simply stand still and let it recharge.

From a control standpoint, it’s remarkably simple. From a design and gameplay standpoint, it’s incredibly complex, but because it all fits together so well, the game moves like a well-oiled machine. You will die, repeatedly I imagine, but the game never glitches or stutters. It’s never the game’s fault.

Once you finish the main game, you’ll unlock some challenge modes and an endless mode that lets you see how long you can last against infinite enemies. These add some replay value, but it does showcase the fact that SUPERHOT isn’t an incredibly long game when you boil it down.

As it stands, the game feels like an excellent foundation and proof of concept. An expanded concept with more levels, more enemy types, and more weapons would really skyrocket the experience. I would love to see these things in a potential sequel.

Despite being difficult, SUPERHOT’s innovative gameplay always keeps me coming back. The main mechanic never truly wears out its welcome. Even after you’ve finished it, you’ll still fondly remember some of its iconic shootouts, and as you move on with your gaming, you’ll never forget that game where time only moved when you did.

SUPERHOT has sterile white environments peppered with black objects and weapons. Enemies are always the same polygonal red figures. There’s nothing to distinguish one from another, but this never really bothered me.

Despite all of the enemies looking the same, the variety of ways you can send them to meet their maker kept the game visually engaging. Headshots make their skulls shatter into chunks of red and orange shards that scatter through the air. The same goes for shots that hit the body or limbs.

A clean slice from a katana cleanly cuts through enemies like they’re made of warm butter. It’s all visceral and satisfying without being bloody or gory. There’s nothing quite like the sound you hear when a level finishes. A computerized voice begins stating “SUPER, HOT, SUPER, HOT” over and over while your replay plays in the background.

You can trim and upload these replays as well, which allows you to show your slow motion antics in real time and make you look like Neo from the Matrix mixed with a little Jason Statham, and some Chuck Norris for good measure.

SUPERHOT ultimately takes a really creative concept and combines it with a unique story, solid mechanics, and a coat of polish. It may not be as long or as in-depth as it could have been, but that doesn’t stop it from being the most innovative shooter I’ve played in years.