The Banner Saga was one of those games that immediately caught my eye when the first title released, due to the gorgeous and detailed art style. While I did sample some of the first game, the time has certainly flown by, because The Banner Saga 3 is now upon us. While part of me wanted to go back and play the first two before jumping into this one, I decided to go into the final game blind to see what new players had to look forward to.

While that’s often ill-advised, The Banner Saga 3 does try to bring new players up to speed. Ultimately, the question at hand is whether this experience is great enough to make me want to go back and play the first two, or if skipping to the final chapter was indeed the right call. Let’s find out, shall we?

A Profound Experience Unwelcoming to Newcomers

Alright, let’s get one thing out of the way: jumping into The Banner Saga 3 is not the ideal way to experience this story or this world. Does that mean you’re going to hate it? No, absolutely not, but it does mean that you’ll feel like the new kid in class who missed the first three-quarters of the semester.

Suffice to say, The Banner Saga 3’s fast-paced and eloquently written story will immediately pull you in and warrant some form of investment from the player. The events themselves aren’t that difficult to grasp, but there was a lot of nuance between the characters that was lot upon me as I didn’t have a vested interest in them.

A perfect example of this “welcome but not welcome” feeling is the game’s opening text. It proudly announces that you are on chapter 13 (I believe) and dives right into the proceedings. Seeing that number, as opposed to chapter 1, immediately made me feel like I had been assigned to the wrong class (if we’re keeping up with the school metaphors).

Despite not having the proper emotional attachments or knowledge of the prior games, I did find myself quickly attaching to specific characters and empathizing with their plight. It wasn’t hard to do so, given the high stakes of the story.

With two different parties divided between a kingdom under siege and an expedition into the darkness consuming the game’s world, there’s no time for rest or relaxation in The Banner Saga 3. Every battle, every decision, every passing in-game day all feels like it matters because they do. The world is coming to an end, and you only have a finite amount of time to stop it.

From what I understand, the gameplay remains largely unchanged from the first two games, but for myself and newcomers alike, I will go through the mechanics at play here. One new addition is the inclusion of wave battles that last more than just one screen of enemies.

In some cases, you will have the option to leave after the first wave, or continue fighting for extra renown (the game’s version of experience) as well as rewards. This would be a good idea if the combat was something besides tactical turn-based mechanics.

I have absolutely no problem with The Banner’s Saga’s bloody version of chess, but it is admittedly slower paced than the frantic feeling of the narrative, therefore, it makes more sense to keep these battles short and tight to keep the player engaged. The waves do the opposite, instead, making a singular battle last far longer than it should.

When you’re in the heat of battle, however, things are pretty interesting. Movement and skills are fairly standard and differ widely between characters, but the mechanics of both armor and health add an extra layer to your strategy.

When you attack, you can choose to focus on the enemy’s armor or health. Dropping their armor allows you to attack for more damage, while losing your own health drops the amount of damage you can do, and vice-versa.

Playing with these stats in battle, leveling up your characters, and equipping them with items that provide bonuses all give you a heathy amount of choice for how you want to approach any given battle.

Several difficulty settings also welcome players of all skill levels, with the easiest option removing the multiple days of recovering you must wait when a hero goes down in battle. Between combat, the game’s narrative moments offer branching choices that aren’t always black or white, giving the title an element of strategy both inside and outside of battle.

It’s a strong formula, and while I would have liked a faster pace to the battles, I can see why it was kept largely the same across the three games. If it isn’t broke, don’t fix it as it were. It’s not going to win over anyone who doesn’t like tactical RPGs, but if you’re a fan of complex tactical RPGs and you like engrossing worlds, The Banner Saga 3 has both in spades. 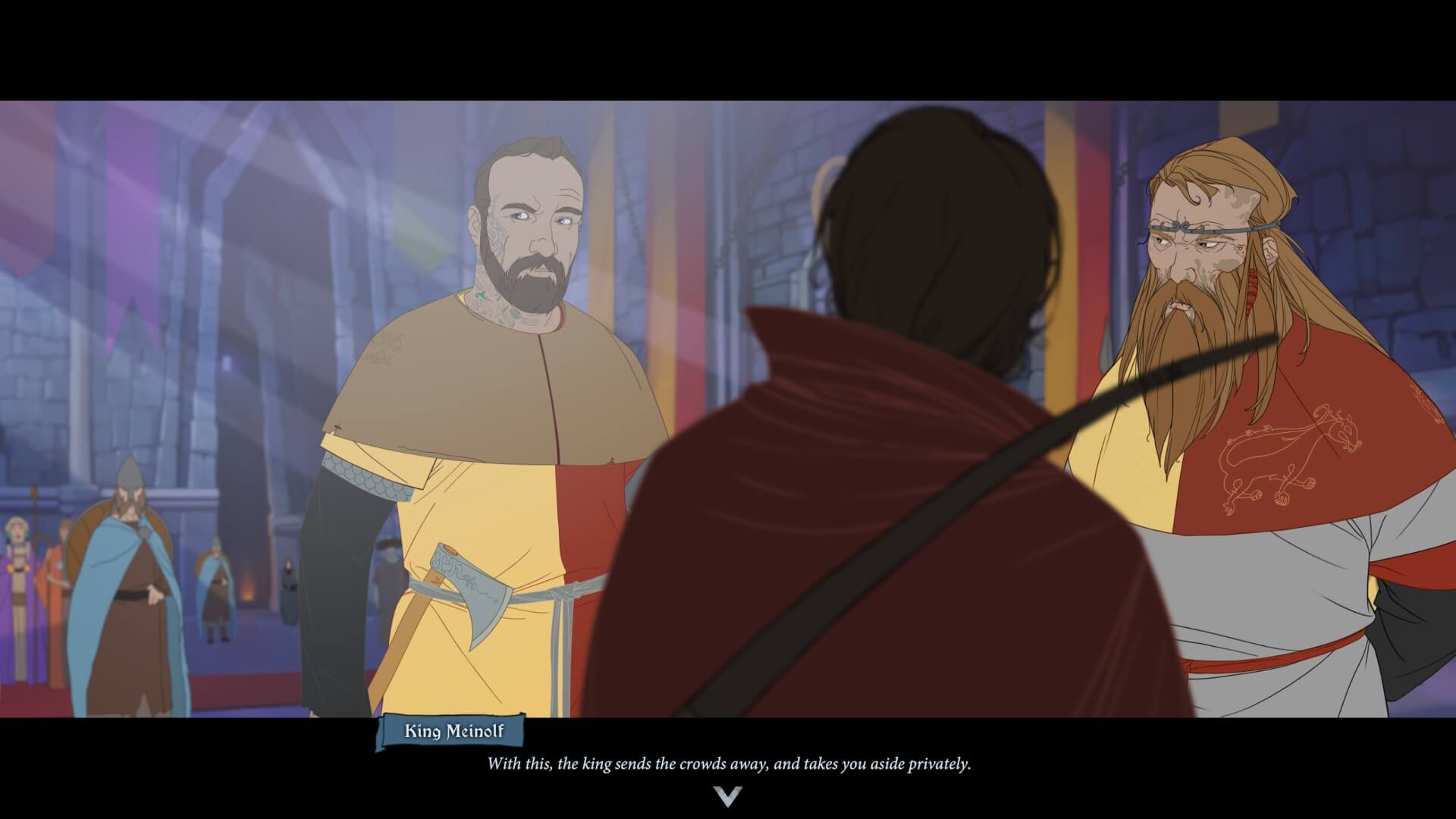 The Banner Saga 3 continues to feature some of the best art in gaming, with absolutely stunning detail on both environments and characters. A powerful soundtrack complements the visuals well, and while fully animated cutscenes don’t come along often, they are a visual treat when they arrive.

During battle, you can zoom in or out to get a full look at the environment. The ability to zoom in should have been limited, however, as it lets you do so to the point where the character models look blurry and unpolished. It’s not a huge issue since I can simply zoom out, but there should have been stricter limits to avoid showcasing less than ideal presentation to players.

The inclusion of voice acting throughout the story would have been an amazing addition, but given the size and scope of the game, it’s understandable that this isn’t a feature. For those who are curious, The Banner Saga 3 is an excellent tactics RPG with a beautiful world and story, but I can speak from experience that it’s best enjoyed with context and choices carried over from the first two titles.

Thankfully, there’s a trilogy pack for sale on PS4 that can fix that problem right up for you. Those with the time and funds to spare will find one of the most beautiful and well-written tactics RPG trilogies on the PS4.