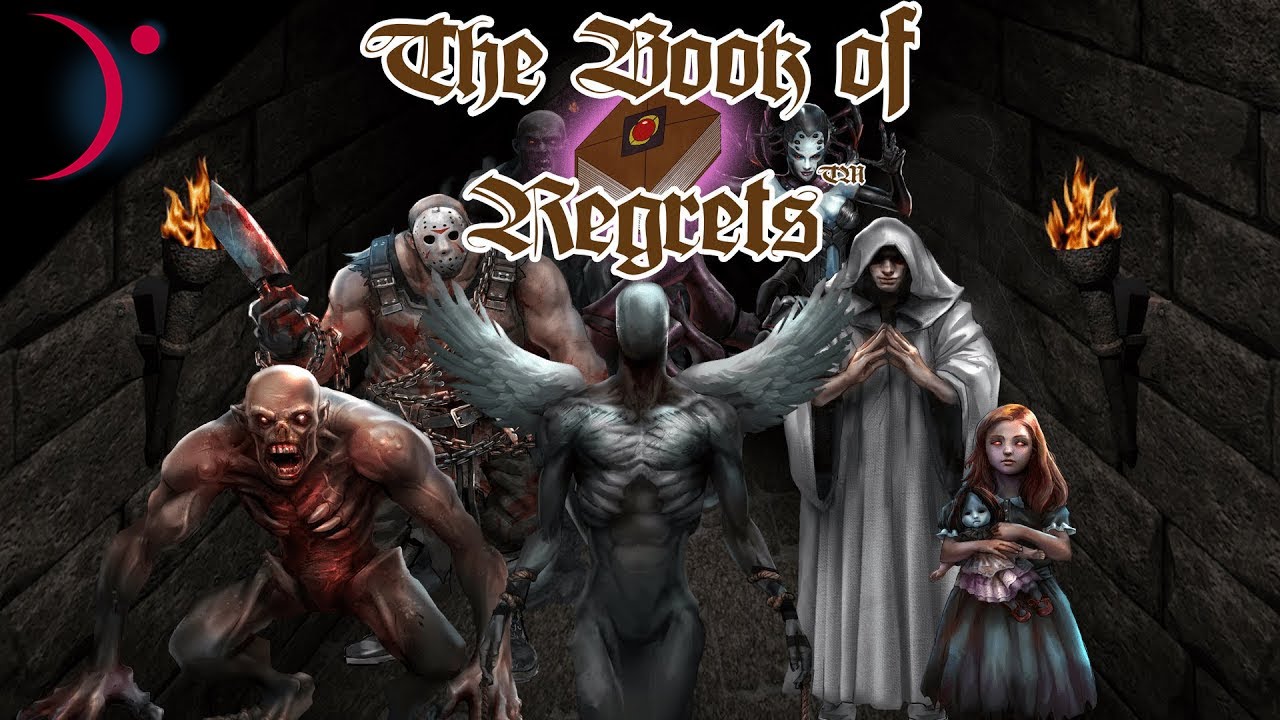 Visual novels in today's industry run the gambit from literal digital books to interactive stories that include puzzles and additional gameplay. The Book of Regrets is among the latter, offering a compelling story, but also plenty of choices to make, puzzles to solve, and mysteries to uncover.

At a very attractive price point of just 5 dollars, does The Book of Regrets offer enough to win over your time and money, or will you regret buying it yourself?

The Book of Regrets uses the classic tactic of giving your character amnesia when you start, but this blank slate works well here as you and the character have absolutely no idea what's going on when you start.

That mystery is excellent because it keeps the game intriguing as you begin to explore and discover new locations. The exact nature of the place you find yourself in is never truly laid out, but I have my theories.

The characters you come across in your adventure are not very inviting, to say the least. Whether it's the enigmatic Angel of Death, the Spider Queen, or a good old fashioned demon, there's a certain sense of terror within the game's world.

You'll find evidence that other people have been here before as well, adding another layer to the mystery. The Book of Regrets has solid writing that ranges from thought-provoking to descriptive imagery. It does a good job of making up for the simple environments and background images.

You'll constantly make choices as well, offering plenty of paths to take through the world. One wrong choice can also spell doom, resulting in many a game over screen. Thankfully, the game has a robust autosave system that ensures you'll never lose too much progress if you decide to poke the proverbial bear.

The storyline itself manages to touch upon some very interesting themes like the nature of life and death, confidence in yourself, and ultimately the titular notion of regret.

The characters you come across can also surprise you in unique ways that I won't spoil here, but suffice to say, you shouldn't judge a book by its cover.

The unpredictability of the story in The Book of Regret is its greatest strength and one that I thoroughly enjoyed. The sense of mystery is strong enough to keep you playing if only to see where it's all going.

Choices Peppered With Puzzles and Minigames

Perhaps this is a result of the game's origins on mobile phones, but The Book of Regrets goes a lot further than other contemporary visual novels in its pursuit of keeping your attention.

This is absolutely a compliment, by the way. Beyond constant choices of where you'll go, what you'll do, and what you're going to say, the game also incorporates puzzles and minigames into the mix.

This ensures that you're not ever staring at a wall of text for too long before the game asks for your input. As a result, I would recommend this to both visual novel fans, and to those who don't like the idea of reading. There's plenty of keep both interested.

For example, instead of simply playing out an intense encounter, the game will throw in some quick time events that change the outcome. Puzzles include things like finding a code for a control panel or navigating dark halls while something fiercesome stalks you in the shadows.

This consistent level of engagement puts the gameplay in The Book of Regrets above the rest of the pack and makes it a far more engaging experience as a result.

There's a stark contrast in the presentation for The Book of Regrets. The environments themselves are very simple and reflective of its mobile beginnings. On the other side of the coin, though, are the character models.

Creatures like The Angel of Death and even your run-of-the-mill demons are portrayed with excellent detail and terror in their character portraits. It's a bit of a jarring contrast, but I absolutely loved the art on the characters themselves, so I'm not complaining.

Voice acting is present but sparse. When it does occur, it's not going to blow you away, but it all sounds fine. Honestly, when it comes down to it, The Book of Regrets is an intriguing visual novel with plenty of gameplay elements to keep just about any type of gamer engaged.

For five dollars, it's a no-brainer if you're looking to try something different. I certainly don't regret my time with it.