Cults are a difficult subject to broach in any medium. There have been very real tragedies involving these groups, so it’s not something you want to take lightly by any means. The Church in the Darkness embodies a lot of these real world events by taking place in a commune in South America where a supposed cult has fled to avoid persecution by the United States.

Despite the similarities, the game offers its own procedural narrative with numerous endings and fictional characters across the board. It’s certainly a unique concept, but does it create a compelling experience around it? Let’s find out.

Delving into The Minds of Madness

The Church in the Darkness takes place in South America where a group called the Collective Justice Mission has set up a commune to avoid problems they faced in the United States. You play as an ex-law enforcement person that is infiltrating the commune to rescue their nephew, Alex.

You can choose from both male and female, along with a variety of skin tones for your character, but it doesn’t do much more than change your persona. You also have the option to take one weapon or item with you on your first run, but this expands later on to allow more items at the beginning.

The Church in the Darkness uses a unique procedural narrative, along with randomized elements, to make each playthrough different than the last. In some cases, Issac and Rebecca, the cult leaders, will appear peaceful and welcoming in their broadcasts around the game.

In other cases they will be severe and strict, promising punishment to those who dare to go against their ways. Other elements in the environment change as well. In some playthroughs you will see peaceful gatherings, but in others there will be mass graves or people being stoned for their transgressions.

This also applies to Alex himself, which is your first main objective. He will sometimes realize the error of his ways, as will other friendly NPCs you meet, but in other cases they will be hostile and set in their beliefs.

All of this ties into the gameplay, which allows you to go stealthy and non-lethal or guns blazing. Even with the multiple difficulties, however, the latter approach rarely works in the long run. The game is played from a top-down (isometric) perspective, which gives you a bird’s eye view of the environment.

Depending on your difficulty, it also allows you to see enemy vision cones when you are crouched. This is extremely helpful as the commune can be extremely crowded in certain areas. It’s not uncommon for me to walk into an area, crouch, and see enough criss-crossing lines to think I’m looking at an air traffic control map.

Despite your main mission, you will also receive side quests from other NPCs, and this allows you to find supporting documents and materials that flesh out the cult and their motivations. Death can be unforgiving too. In some cases you will get a second chance, but in other scenarios you will be killed outright with no chance of escape.

Death resets your progress, but you can choose to use the same cult personality on the next playthrough if you choose. Since the game is only an hour or two in length and has numerous endings, this roguelike element is intentional. Given the intense difficulty spikes in certain areas or playstyles, it can be frustrating, but overall I liked this approach. 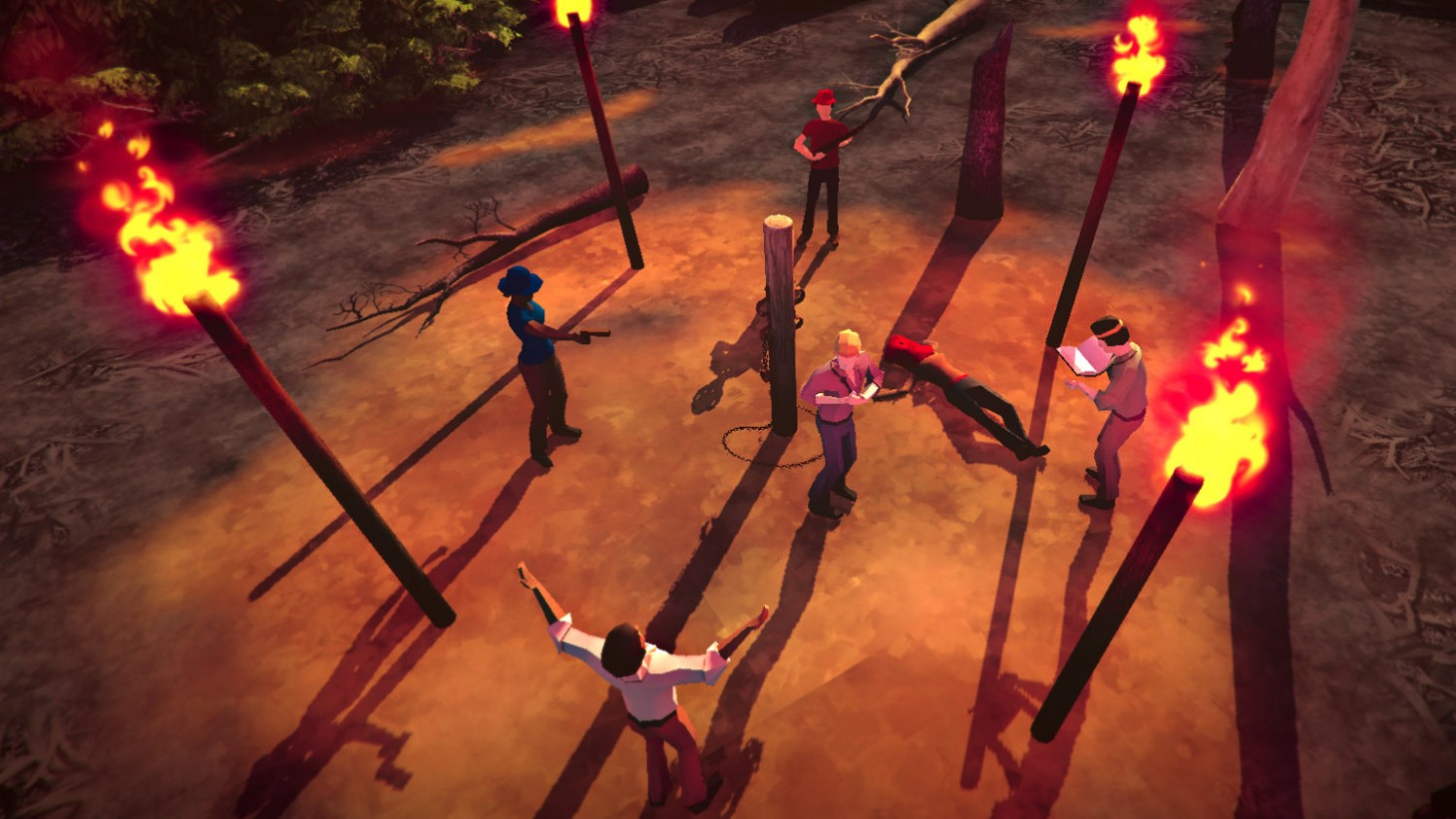 The Church in the Darkness has a simple art style that works well due to the zoomed out perspective. Up close it can look a little blocky, but you rarely get a look at the graphics in detail. The voice acting from the leaders across the camp is well done, with veteran actors playing both Issac and Rebecca.
Other characters will make faux speaking noises that can sometimes come across a little loud and distracting. I would have preferred they remained quiet to keep the tension at its highest.

The Church in the Darkness is certainly one of the most unique games I’ve played, and it’s wealth of different endings and stories makes it ripe for multiple playthroughs. While it doesn’t knock the gameplay out of the park, those looking for a unique experience should take a look.

A copy of The Church in the Darkness was provided to PS4 Experts for review purposes.