Narrative adventures have really come into their own this generation. With Telltale leading the charge, DONTNOD and Deck Nine took the next step with their Life is Strange games. Now, we have a new contender for the throne. Big Bad Wolf is here with The Council for PS4.

The first episode is out now, with five planned in total. In this narrative adventure, you play as Louis de Richet who arrives on the island of Lord Mortimer to investigate the disappearance of his mother. With secret societies, mysteries, and mechanics galore, is this the future of the genre? Read on to find out!

This is Probably a Fiction

The opening screen of The Council provides the usual disclaimer with a tongue-in-cheek approach. It starts by advising the player that this is “probably fiction.” It’s a small thing, but it made a great first impression on me as someone who loves heard conspiracy theories.

The Council: Episode 1 - The Mad Ones sets up the game’s primary narrative, but the setting itself was intriguing enough for me to jump in. You play as Louis de Richet, a member of a secret society known as The Golden Order.

He and his mother work together on cases, until one day she disappeared on Lord Mortimer’s island. Louis arrives among other guests who have come to attend one of the lord’s famous revelries.

While his purpose there is to find out where she is and what happened to her, Louis is quickly swept up into the politics and intrigue surrounding him. Powerful figures have come from all over the world to attend. You’ll even have opportunities to speak with historical figures like Napoleon Bonaparte and George Washington who are repeated guests of island’s owner.

The presence of these major players is only the tip of the iceberg. My conspiracy detector was running off the charts during the entirety of my playthrough. With plenty of references to secret societies and world affairs, combined with hints at supernatural elements, The Council immediately had me hooked into its world. Beyond the unique setting, a few other things really stood for me, and cemented Big Bad Wolf as a developer to watch going forward.

For starters the game has you choose between one of three different classes after the opening scenes. These include Detective, Diplomat, and Occultist. Your responses, your skills, and ultimately, your opportunities will be dependent on which class you choose.

While you can learn skills from other classes, they cost more points to obtain. Skills are just the beginning, however. You’ll need to fish out immunities and vulnerabilities in each of the other characters you interact with.

There are several other mechanics as well that we’ll cover momentarily, but suffice to say, The Council adds a wide selection of RPG elements to the narrative adventure genre. This additional depth and flexibility carry over into the story as well.

Your responses, dialogue, and the outcomes of various events will all change based on how you leverage your knowledge of the characters, your skills, and a little deduction of your own. Having played the episode once completely, I also tried starting over to make a few different decisions and I’m really impressed with how much things can change.

Large strokes of the story can easily go different directions, but even subtle moments and dialogue are flexible based on what approach you take. For example, if I specialize in the Occult, I’ll be able to translate text that would otherwise look like gibberish to Louis.

Similarly, if I choose to be a detective, I can cut through distractions and instantly locate useful clues or information. It’s a flexible and malleable story that really impressed me with how it adapts to the RPG elements.

Now, not everything is perfect here. The first episode, while meaty in content, does have moments where it drags along. The narrative takes some time to get moving, and while the cliffhanger is interesting, there wasn’t a lot of action to keep players engaged.

A lot of the episode was dedicated to world-building and verbal confrontations. I didn’t mind these things much, but some players may hope for more consistent pacing. It also took some time for me to get used to Louis’ voice acting.

Both Louis and his mother have different voices than I expected. Louis looks older than he sounds, and his history made me think he would have an accent of some sort. His mother also sounds very young for her age, so it was a little jarring.

Some of the lines can come across a little rough, but after spending some time with him, Louis’ voice grew on me. Other characters all turn in respectable performances. It’s a small nitpick, but don’t be surprised if you do a double-take when they first speak.

Let’s find out how these mechanics translate to a gameplay experience.

A War of Words

The Council, even judging by the first episode alone, is shaping up to be a standout series. This is a combination of an intriguing plot and an amazing level of mechanical depth to the gameplay. When I tell you that something is a narrative adventure game, you probably expect quick time events and dialogue choices, but not much else.

This is where The Council: Episode 1 truly shines. As I mentioned before, you’ll choose a class when you start playing that gives you access to specific skills at a lower cost than others. There are four chapters to this episode, so EXP is calculated at the end of each chapter.

There are plenty of clues to find in the environment, but you’ll also find collectibles as well and even books that you can read to gain additional skill points within the episode’s sub-chapters.

On top of all this, the game’s interactions ask for more than mere dialogue choices. Your skills come into play as you’re talking to characters. Trying to convince someone of something? Leverage your logic skill to select an answer that uses that skill.

You can otherwise try to choose solutions on your own, but it’s very difficult to succeed if you refuse to utilize your skills. These skills will be more or less effective if you know the other person’s vulnerabilities and immunities, which are revealed through proper choices.

The game doesn’t stop there. You’ll also need to navigate confrontations with other characters which act as the game’s pseudo boss fights. During these encounters, you’ll need to carefully select your responses. If you make too many mistakes, it’s over and you lose.

Another mechanic called opportunities lets you quickly spot clues on a person during key moments. You’ll only have a few seconds to choose correctly, and it requires a specific skill. These moments can reveal valuable information about characters.

While the narrative structure is still intact, these interweaving mechanics make something simple like talking or arguing more exciting than it is in other similar titles.

A Detailed Presentation With a Few Cracks 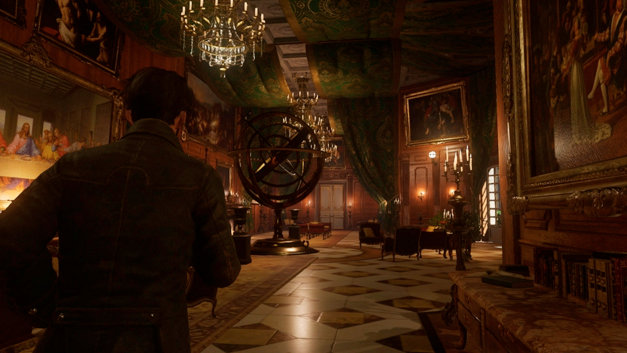 The Council: Episode 1 - The Mad Ones is a good looking game, especially in screenshots. In motion the cracks begin to show. Lip sync, for example is never quite exact. Characters have exaggerated mouth animations that tend to fall out of rhythm with what they’re saying.

The faces and environments are quite detailed, but they do tend to fall into the uncanny valley more often than not. These qualms aside, my experience with The Council was largely positive. From a gameplay and story standpoint, I think it’s the first game in years to move the genre forward with new ideas.

For that reason alone, I have to recommend it. I’m very interested to see how these mechanics progress in upcoming episodes.

A copy of The Council Episode 1: The Mad Ones was provided to PS4 Experts for review purposes. Played and reviewed on PS4 Pro