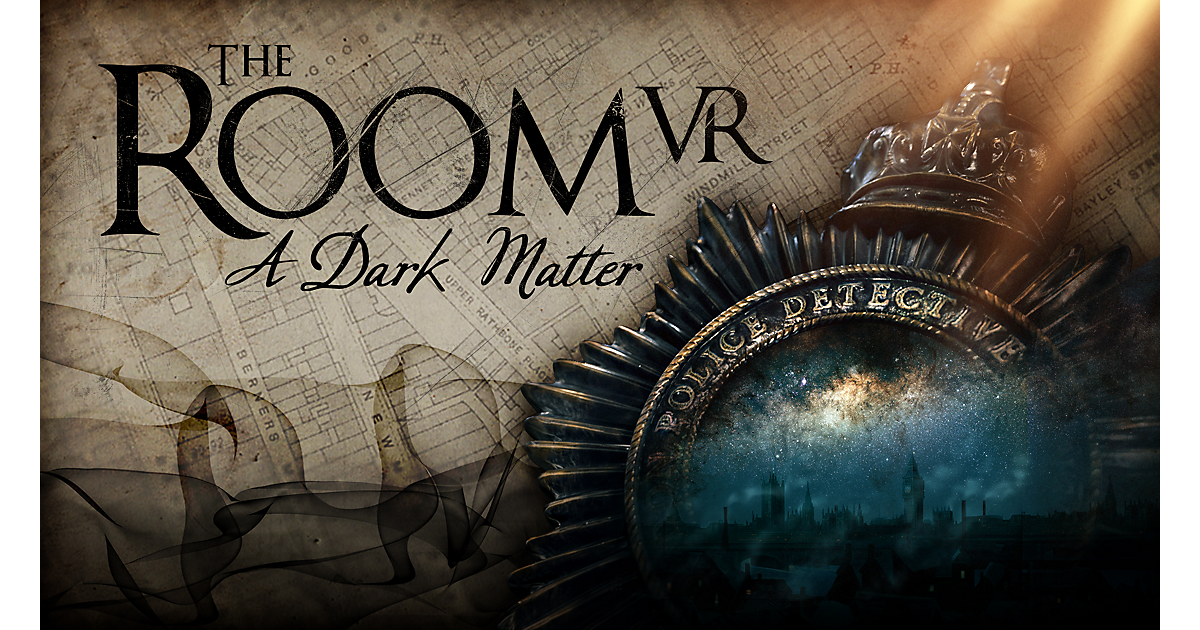 The Room (not the Tommy Wiseau movie) is a series of escape the room puzzle games that has usually been on either PC or mobile devices. I myself have the first three entries on my Android. A combination of mysterious environments, clever puzzles, and moody atmosphere has given the series a high pedigree among gamers (myself included).

Now, The Room VR: A Dark Matter brings the series to PSVR for the first time with a brand new entry into the larger universe. The tactile nature of the gameplay lends itself well to VR, but does this title make the leap in fine form, or will you be wishing you could escape from your VR headset instead? Let’s find out!

The Epitome of The Escape Room Genre

There’s something inherently exciting about games in the “escape the room” genre of puzzle titles. In VR, this sense of being present within a space is heightened tenfold compared to staring at a TV or a phone screen.

That’s why these types of games have popped up pretty often since PSVR hit the scene, but they sometimes miss the mark. A truly great title in this genre needs to establish a strong sense of place, offer up interesting and organic puzzles, and keep you hooked as you slowly unfold the mystery around you.

It’s a lot easier said than done, but the folks at Fireproof Games have done it time and time again outside of VR. I’m very happy to report that the shift to a VR entry for this series has not only proven that the formula works in virtual reality, but that it’s even better as a result.

Starting with the premise, the story in The Room VR: A Dark Matter places you in the shoes of a detective who is investigating the disappearance of an Egyptgologist. You begin the game in your office and solve a few puzzles while learning the game’s controls.

Before long, you find yourself in a completely different location, and then another after that. The story in this game takes you to several widely varied and distinct locations that I won’t spoil here. What I will say is that you probably won’t guess where you’re going next if you’ve gone into the game relatively blind.

As you progress through the levels, the story is delivered to you via hand-written notes from different characters. In a mechanic that’s both unique and immersive, you’ll also use these notes to trigger ghostly apparitions that show you additional story related information in a visual manner.

I’ll be gushing about the visuals later in this review, but when I say “ghostly apparitions” I don’t mean a semi-transparent character model. No, these moments offer up uncannily realistic characters that drip with ethereal smoke and move with a realistic style that I can only imagine was done with some sort of motion capture.

In short: it looks absolutely fantastic. The notes, combined with some text that appears on screen from the main character’s own mind, offer a story that’s both haunting and mysterious. It’s not quite as deep as I would have liked (given the series’ larger lore from other titles), but it’s quite the adventure nonetheless.

I wish it would have gone deeper into some of its themes and expounded more on the more cryptic elements, but that doesn’t stop what’s here from being a very solid driving force throughout the adventure.

The gameplay and puzzles are the largest focus of The Room VR: A Dark Matter, and rightly so, because this is where the developers at Fireproof Games have earned their reputation for exquisitely designed virtual escape rooms.

That history returns in fine form here, and VR only adds to the immersion of it all. The option to play with a DualShock 4 or Move Controllers is there, but I opted for the Moves as I usually do in these scenarios. Playing seated or standing is an option, but I opted for a seated position in my living room.

I rarely say this about puzzle games, but every single puzzle (save for one involving an organ that resorted more to skill than intelligence) in The Room VR: A Dark Matter is absolutely amazing. If you’ve never played any games in this series, each level begins with a large area that you can explore.

You’ll come across things like boxes, artifacts, machinery, and locking mechanisms, all of which will eventually intertwine with each other and play a role in finishing the level as a whole. It’s incredibly exciting each time you step into a new level here, because the possibilities are both exciting and overwhelming.

While the game does only offer teleportation and click-turning, the nature of the gameplay means that you’ll want to quickly swap between specific locations to use items or continue your work on a line of thinking. For this reason, I probably wouldn’t have used smooth locomotion if it was an option as it would have slowed things down too much. Smooth turning, however, would have been a nice addition as clicking to turn can sometimes hurt my eyes with the flashing images spinning around me.

The puzzles themselves have a pretty consistent difficulty curve. There were always some that took me longer than others, but there’s no shortage of “Ah hah!” moments in The Room VR: A Dark Matter. This feeling of satisfaction is further heightened by the tactile nature of the world, a feeling that’s amplified in VR.

Solving a puzzle in The Room often results in some sort of tactile feedback. Whether that’s pulling a lever, inserting a key, or turning a gear, you’ll soon be rewarded with intricate mechanical animations that result in drastic changes to the environment or the object in front of you.

It’s like encountering the ultimate toy box and watching in wonder as your inputs result in fantastical whirrs and transformations. This latest entry takes things a step further as well by expanding the abilities of your lens.

In past games, the lens you find lets you reveal hidden messages or puzzles within the environment that are required to proceed. It does that here as well, but additional mechanics get layered on as you progress.

My favorite of these was the ability to shrink yourself and walk into certain puzzles to navigate them from the inside. The developers used this as a moment to play with perspective, something you can only do in VR, and it’s amazing.

From the outside, you may have an intricate box with a glass lens reflecting colored light, but when you step inside suddenly you’re surrounded by a massive internal mechanism that decides the pattern and color, both of which you’re now able to manipulate.

To properly explain how immersive and exciting this level of thought and detail is for someone that experiences it for the first time, I’d have to compare it to playing the classic PC game Myst. When I played that game as a kid for the first time, I was swept up in the cryptic mystery of it all. The way I could flip switches, manipulate strange machines, and shift the environment around me was immensely captivating.

The Room VR: A Dark Matter invokes that same childlike wonder for me in every single moment of its runtime. I probably spent about 4 hours or so on my playthrough, but I would absolutely do it again later on or show it to someone else so they can experience it.

To that point, I had my fiance (my Player 2 as I call her) play a chunk of the game herself since she loves puzzle titles. She agreed with me that the sense of wonder and immersion was beyond anything else she’d played in VR.

All of this is wrapped up in tracking that never missed a beat for me. Every time I wanted to grab, turn, push, pull, or twist something in the world, it responded with a satisfying sense of movement and physical feedback.

It’s a VR game that oozes atmosphere and provides incredibly tactile gameplay. If the overall presentation matches this level of gameplay quality, we may have a killer app on our hands. Let’s bring it on home! 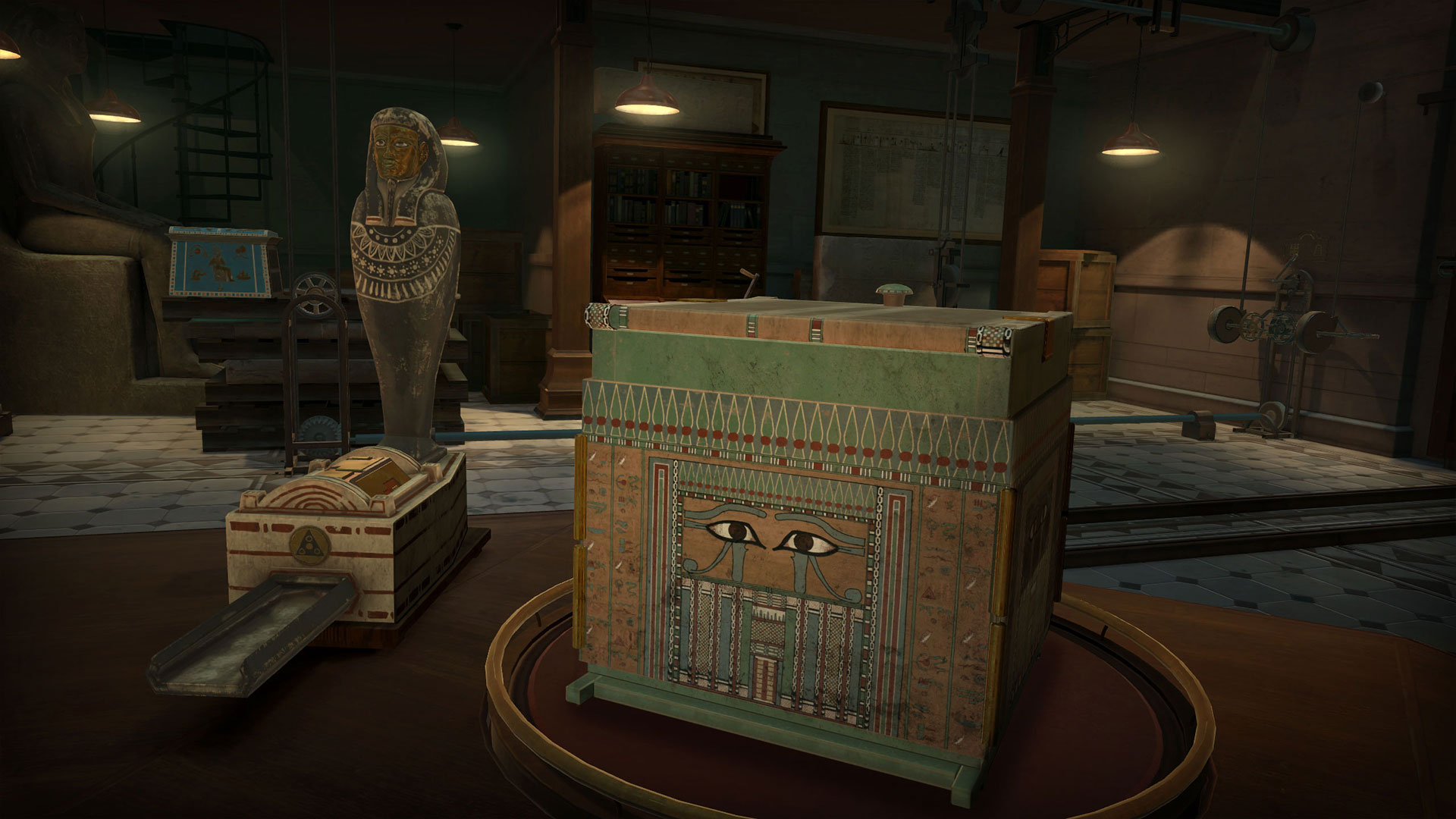 The Room VR has perfectly crisp graphics on PS4 Pro. Environments are detailed, interesting, and highly interactive. The puzzles themselves feel like organic parts of the world and provide interesting physical changes as you progress.

The effects on the ghostly people you encounter, as I mentioned earlier, are uncanny in their realism. This also applies to things like the flourish of a page as it flies through the air and lands in front of you. The game looks utterly fantastic from top-to-bottom.

When you use the lens to reveal new elements, messages, or interactions, the eerie neon glow of everything adds an excellent contrast to your standard unfiltered vision. The inventory, similarly, also works well for quickly grabbing and utilizing items.

It’s also worth noting that a hint system exists on the inventory screen. After certain intervals of time, you can pull down the question mark tabs to get a hint on your current puzzle. These start relatively vague and progress to more concrete answers across the three tiers.

Purists will leave them alone at all costs, but I appreciated the gentle nudge from time-to-time. They’re not intrusive at all if you plan on not using them, but it’s inclusive for all skill levels to have them there.

While I wish the final areas of the game lasted as long as earlier levels, I cannot deny that The Room VR: A Dark Matter had me utterly glued to my headset from start to finish. It’s insanely polished, exceptionally well designed, deeply immersive, and wonderfully atmospheric. In summary: it’s easily one of the best games I’ve played in VR.

A copy of The Room VR: A Dark Matter was provided to PS4 Experts for review purposes.