Goichi Suda, more commonly known as Suda 51, is one of the most recognizable names in the game industry. Known for amazing cult classics like Killer 7, Shadows of the Damned, and No More Heroes, his reputation truly precedes him.

With the release of The Silver Case on PS4, we've got an HD remaster of his studio's first game. Does this visual novel from 1999, previously unreleased in America, showcase the roots of Suda 51's insanity? Or, does this game settle for a something less than a silver medal? Time to find out.

The First Suda 51 Trip Has a Few Bumps

I'm an unapologetic Suda 51 fan, but even I can admit that some of his games are better than others. You can always expect oddball storytelling and whacky characters in his games, but sometimes it's combined with willfully confusing story arcs or inconsistent pacing.

First and foremost, The Silver Case is something that I think all Suda 51 fans should experience. Despite its flaws (which we'll discuss momentarily), it's an amazing experience to see how Suda 51's iconic style began.

Now, if you're not a huge fan of him or of Grasshopper Manufacture, and you're just looking for a new visual novel, The Silver Case still has a lot to offer. As part of the package, you'll get two parallel storylines to experience, and a couple bonus chapters that flesh out some of the gaps in the plot.

The first storyline I dove into was Transmitter. In this set of chapters, you play as a silent protagonist that you can name however you like. You're mostly an observer, but characters do refer to you from time-to-time.

You have the unique backstory of coming face-to-face with a notorious serial killer. Out of your entire team, you were the only survivor. You don't have any direct dialogue choices, but you will be given orders by your colleagues and superiors throughout the story.

It doesn't leave much room for development on your character specifically, which is a bit of a missed opportunity. That being said, the characters around all go through their own story arcs that represent classic Suda 51 in their nonchalant reactions and rambling philosophical dialogue.

While Suda 51 is known for going on trippy tangents, in recent years he's reeled in some of the more superfluous conversations. With The Silver Case, being that it was originally from 1999, the pacing can come across as very inconsistent. More so, the dialogue can ramble on and drag out conversations longer than they need to be.

The way the game is structured, the cases feel like episodes of a crime drama. There's an overarcing story, but you'll also deal with specific crimes and investigations within the Transmitter storyline.

Some of these are better than others. While one case can be a bit of a slog as you investigate an entire apartment building, another can be a high stakes thrill ride as you try to save a kidnapped CEO.

It feels like Suda 51's talent is at work here, but it comes in fits and starts. As a fan, this is an awesome way to see how his work has evolved, but the average gamer may find that the pacing and inconsistent cases start to wear thin.

Thankfully, the Placebo storyline that you also have access to, remedies some of these issues. In this story, you play as a freelance reporter named Tokio Morishima. Since we have a defined character in this arc, you'll get to know him a lot more than your silent protagonist in the Transmitter story.

Interestingly enough, this story was also primarily written by another member of the team. While Suda 51 did most of the work on Transmitter, Placebo was mostly written by Masahi Ooka and Sako Kato.

This change in writers make the other scenario feel refreshing because the writing is a bit different and more introverted than Suda's work.

For example, Tokio keeps a running journal on his computer in the game. You'll constantly refer to it and read along as he records his thoughts. The trade-off here, is less gameplay. Placebo is more concerned with delivering constant dialogue and in-game text, than having you solve puzzles.

You'll spend a majority of the time in Tokio's apartment. Here you can access your computer, read emails, use the phone, and have one-sided conversations with his Turtle, Red.

In addition to these two main stories, the PS4 version of The Silver Case also includes two extra scenarios called "Yami" and "Whiteout Prologue." Ooka returned to work on both of these new chapters, and Suda also worked on the prologue.

Yami is set several months after the main game, while the prologue takes place in the far future, and connects to the sequel, Ward 25. Suda 51 has said that, if The Silver Case HD is successful, we'll see a remake of this sequel as well.

The crime drama storyline here is pretty good, and it does have its fair share of twists and turns. Classic moments of Suda 51 oddities and whacky moments are spread throughout, but it does get hampered down by less interesting cases, and some drawn out dialogue sections.

Controls and Gameplay Straight From The Past 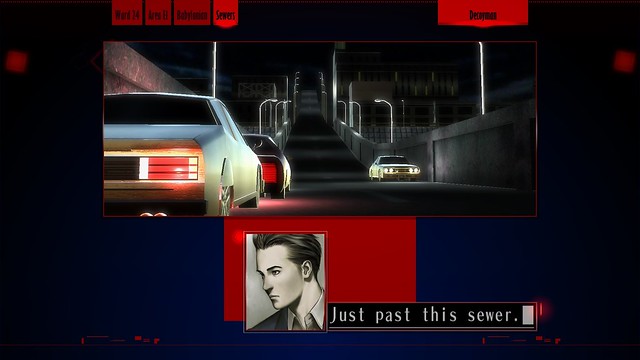 The Silver Case is remastered in visuals only. This means that the gameplay, for better or worse, has been kept the same. What's funny, is that your character in Transmitter is told early on that the controls are confusing, but you'll get used to them.

It's true, they were very confusing as first, but I did indeed adapt to them over time. When you're first given control, you'll have a wheel with single letters on it. This letter represent different control modes. M is for movement, S is for Save, and so on.

You'll select the M and then you'll be able to move around the environment. You can only move in specific paths across four basic compass directions, so it feels kind of stiff and clunky at first.

When you step into areas with floating stars, you can interact with something in that spot. This will involve turning and looking up or down to find the "contact point." The game uses arrows at the bottom of the screen to point left or right to show where this interaction is, but looking up or down is up to you with the R1 and R2 buttons.

Pressing triangle will open up a menu listing the possible things to interact with, including people. Now, if you want to use an object like a key, you'll need to press circle and back out to the wheel. Here, you'll turn to the I for Implement, and then have the option to select an item.

If it sounds confusing, that's because it can really throw you for a loop when you first start playing. While it's undeniably clunky, I got used to it after some time and it never really presented an issue.

Being a visual novel, The Silver Case isn't required to have constant gameplay, but there have been numerous titles in this genre since 1999 that found ways to incorporate unique gameplay and puzzles into the fold.

For visual novels that don't have a lot of gameplay, a constantly engaging story is a must. Since The Silver Case stumbles in this regard, it's a shame that the gameplay doesn't involve more puzzles or interactions.

Even the number puzzles can be "skipped" by selecting a magnifying glass that gives you the answer. This is fine for players who want to keep things moving, but beyond exploration, there's very few times the game asks you do anything beyond click through dialogue.

Again, being a visual novel, I can't fault the game too much for not having more gameplay, but when the story tends to meander or ramble, strong puzzles can pick up that slack. Unfortunately, that's not the case here. 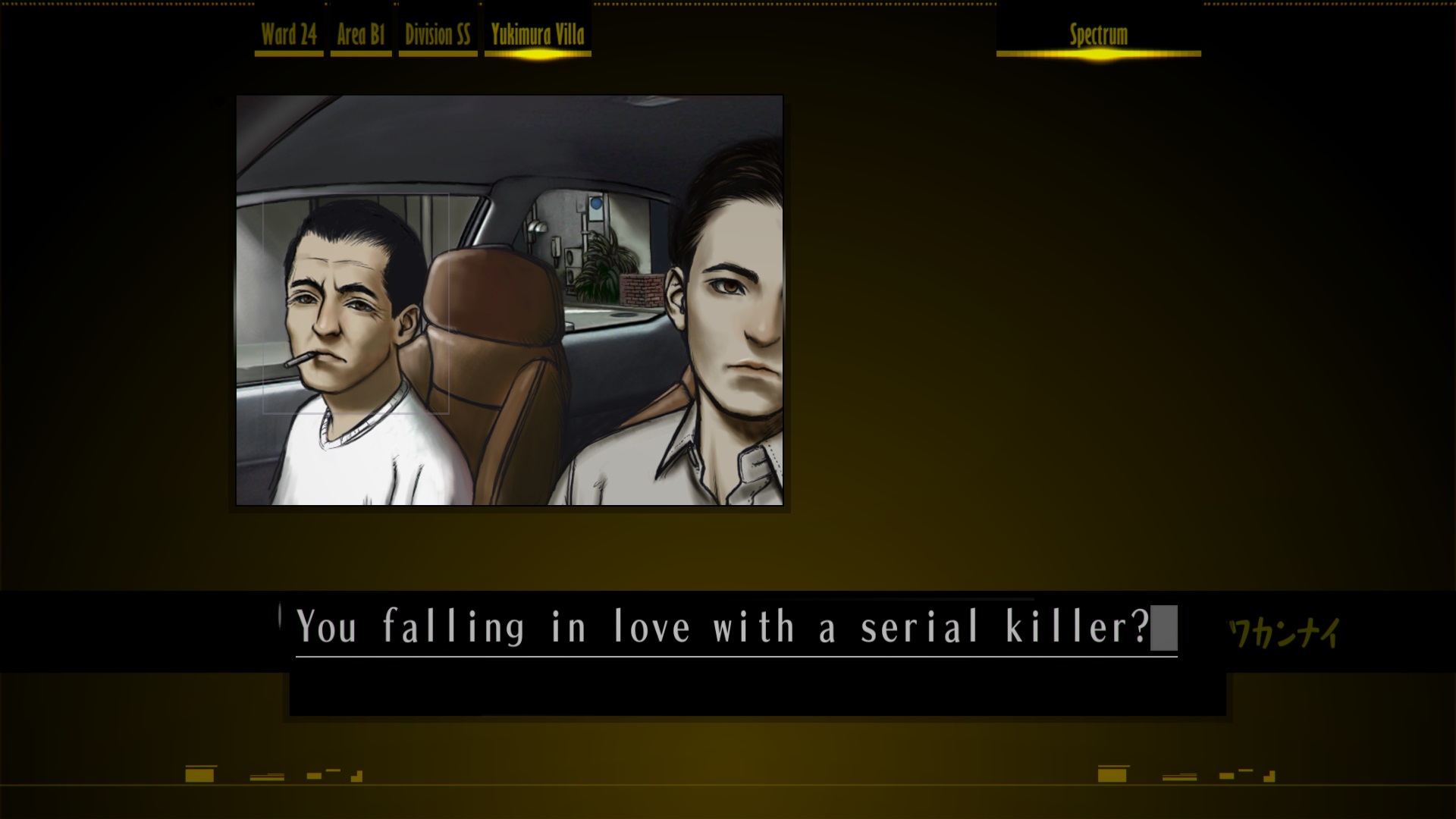 At the time of its release on the original PlayStation, Grasshopper Manufacture used its own style of presentation called "Film Window" to get around the hardware limitations of the time.

This involved displaying the game on a smaller screen within a larger interface. It also involved a mix of live action, still manga drawings, anime sequences, and other unique elements.

Now, some people will find all of this elements at odds with each other, but I rather liked the varied layers of the game's presentation. The only downside here, are the live action and animated clips. These take up the whole screen and don't seem to be upscaled in terms of resolution.

As a result, the animated segments tend to look pixelated and grainy on a modern television. It's not a dealbreaker, but it does take away from the otherwise unique presentation.

The rest of the game's environments are polished with HD textures. They don't have a ton of detail, but they look nice compared to their PS1 counterparts. The text and character portraits also look crisp and modern.

As a Suda 51 fan, I had a difficult time with The Silver Case. On the one hand, I loved the opportunity to experience the origins of Grasshopper Manufacture and Suda 51's storytelling. On the other hand, I couldn't simply look past the game's dated gameplay and its inconsistent storytelling.

In the end, I would recommend this to fans of his work, simply because it's a unique and rare look into the origins of a modern gaming master. For other gamers, I think it's worth a shot if you're into visual novels. Just remember, this is a remake of a game from 1999, so don't expect a lot of the flourishes that modern visual novels offer.

It's not just any Suda 51 trip, it's the first one ever. For fans of his modern work, it's a trip well worth taking.