Ever since the rise of the Souls games developed by From Software, other developers have made their own attempts to create a crushingly difficult RPG that keeps you coming back for more. Deck 13 is one such developer. Their first foray into this concept was Lords of the Fallen.

They changed things up for their second souls-like title and went with Sci-fi in The Surge. Now we have the complete edition that includes the new expansion: A Walk in the Park. Does this game inject some originality into the formula, or does this surge fry its circuits?

A Hands-Off Story in an Intriguing World

New players can purchase The Surge: Complete Edition to receive the base game and its expansion (both are covered in this review). Returning players can buy the expansion separately.

The story in both The Surge and in A Walk in The Park is told with a very hands-off approach. I liked that the expansion was seamlessly integrated into the game's world.

Instead of selecting the expansion as a separate story or experience, you will organically come to the new area in your progression through the early game.

The expansion is divided into two parts and two entrances throughout the main game's map. In both cases, you will be taken to CREO World, which is an amusement park made by the corporation behind the game's events.

This park was meant to be a place of relaxation and enjoyment. The CREO corporation, after all, is trying to make the world a better place. By the time you've arrived, the amusement park is in ruins.

Deadly workers and machines stalk you from every angle. During the expansion, you'll be helping the Operator of a search and rescue team that is lost in the park.

During your search for survivors, you'll also uncover the true nature of the mission into the park. The rest of your time in the main game will take you through the bowels of the CREO corporation.

The opening of the main game's story leaves a strong impression on you. As you ride the train into the CREO corporation's facility, you only see the head and shoulders of your character.

It quickly becomes clear that you are paralyzed from the waist down. The CREO corporation promises you the use of your legs, in return for your service to them as a worker.

The process, as it turns out, is quite painful. You'll be fitted with an exosuit and thrown into the game's world after some catastrophic event (probably a surge), caused the workers and robots to go insane and start killing everything in sight.

I wish the game had continued to deliver on the promising setup, but it takes a step back from the story for most of the experience. Even the expansion goes for long stretches without any exposition.

I really liked the world here, so it's a little disappointing that there isn't more story to flesh out the unique setting. 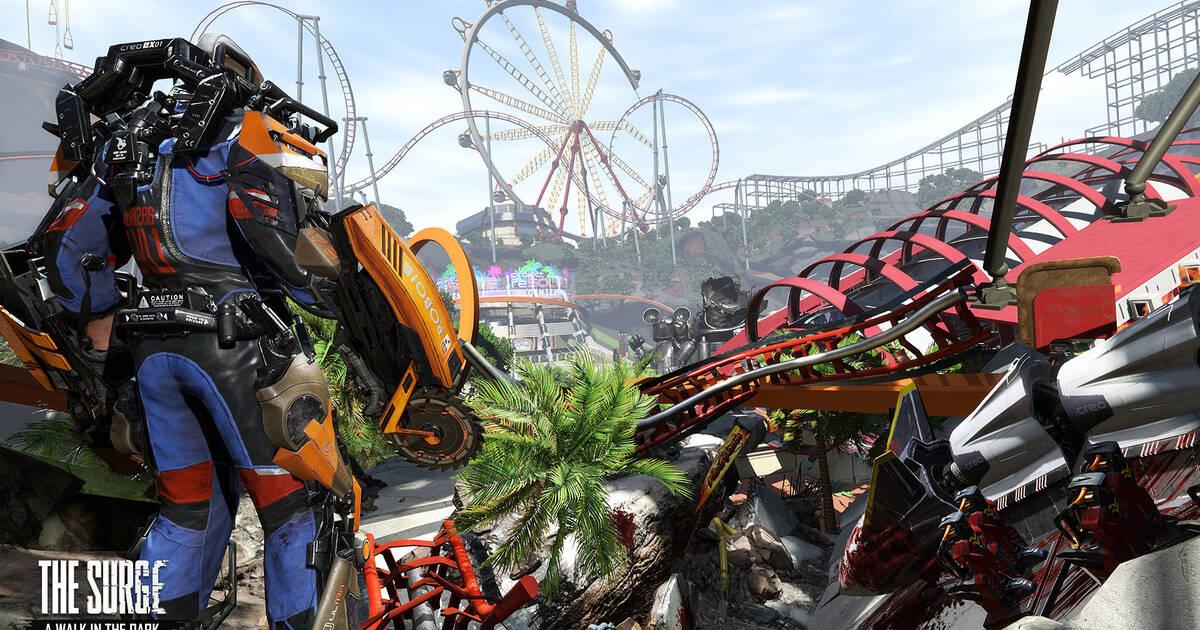 The Surge follows the Souls formula by providing a visceral and punishing experience for gamers. Easy mode is nowhere in sight as enemies will cut you down in one or two hits if you're lucky.

Depending on your loadout, you'll have some good mobility to dodge and dash during combat, which gives The Surge a more varied strategy than other games in this subgenre.

The ability to target specific body parts also adds another layer of strategy. If an enemy's head in unarmored, you can do more damage attacking that.

Similarly, if you covet the enemies left arm armor, you can target that and have a chance of cutting it off, thus giving yourself a new piece of equipment.

Of course, it will be damaged. You'll need to repair it with parts you can scavenge in the world before it can be equipped. As you push forward through the areas, you'll collect XP that can be spent to level up, or banked for later usage.

Dying causes you to drop all the XP you've earned. Not only will you need to go back to your last location to get it, but you'll need to do it without dying a second time. The Surge even goes one step further and gives you a time limit!

Beyond equipment and levelling, you can also equip chips that augment your abilities or give you more feedback during battle. Some chips can be swapped on the fly, while others have to be installed at base area.

Since there's a lot of space between save areas, you'll find plenty of shortcuts you can open that make going back and forth easier. Enemies will respawn each time you die or return to save your game, so these shortcuts are immensely helpful.

And of course, no Souls-like game would be complete without bombastic boss fights. The Surge is a little more limited in this regard because of its sci-fi setting.

While the bosses are intense and difficult, they mostly amount to giant robots in various forms. Even so, you're going to get your money's worth pushing through the main game and the expansion.

You're going to die. A lot. If you're easily frustrated, this isn't the type of game for you. Personally, I don't mind a challenge. That being said, The Surge and its expansion tested my patience, but I never felt like the game was being unfair.

It's just damn hard, and that's the point. 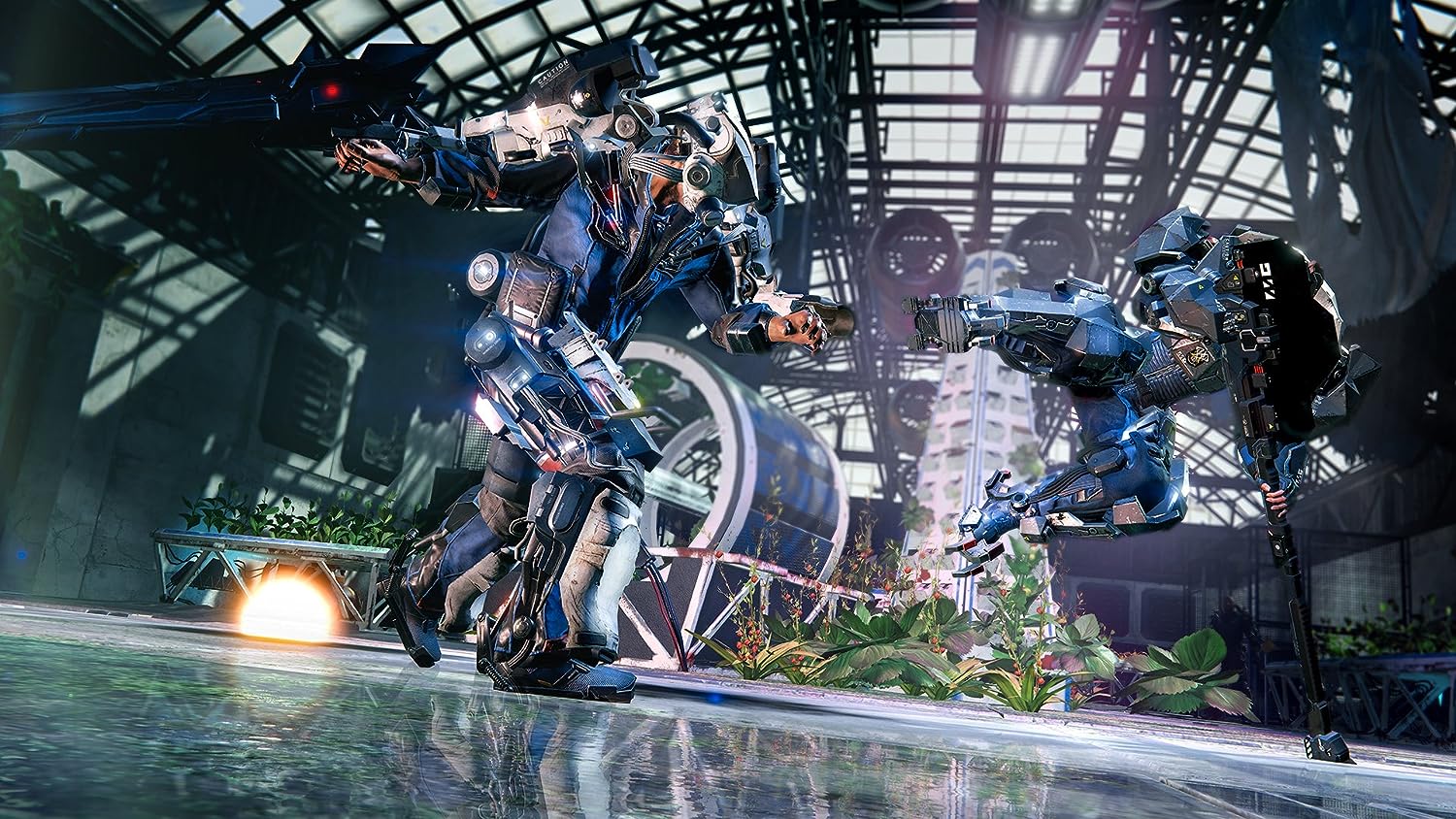 The main storyline in The Surge takes you through a variety of industrial areas, but they all start to look the same after awhile. Thankfully, A Walk in The Park alleviates this somewhat by offering a colorful and macabre excursion.

The CREO World amusement park is, visually, far more engaging than the dark tunnels and factory floors of the main game. Playing on PS4 Pro, I was able to choose a performance mode that prioritized frame rate over everything else.

This resulted in buttery-smooth 60-fps gameplay. I would highly recommend playing this way if you have access to a PS4 Pro, it makes the combat feel even better than it already does.

For fans of the Souls games, The Surge offers a fresh setting and some unique features. It doesn't quite top the games it's competing with, but it's still worth checking out.

Even if you're just someone who wants to try out this formula, The Surge: Complete Edition is a great entry point for newcomers. Just remembered that the term "surge" here refers to the difficulty.

A copy of The Surge: Complete Edition was provided to PS4 Experts for review purposes. PS4 version was tested on a PS4 Pro system