When the PlayStation Move first released, one of my first hopes was that we would have the ability to cast spells with hand gestures. It did happen once with an older PS3 game, but the concept has been vastly underutilized.

Thankfully, The Wizards: Enhanced Edition for PSVR offers the ability to cast spells through specific gestures in a world of high fantasy. Does it capitalize on this concept and create a world that’s nothing short of magical? Let’s find out.

Dungeons, Dragons, and Fireballs Oh My!

The Wizards: Enhanced Edition is a beefed up version of the same title that released for PC VR platforms a while ago. This same content is coming to the PC version as well, but PS4 players are enjoying a host of improvements and a brand new level that adds several hours of gameplay.

While The Wizards could have given us an in-depth fantasy story that felt like a rock-solid D&D campaign, the story here is far simpler than that. The narration is good and the story itself isn’t boring, but it doesn’t do much to elevate itself above standard fantasy fare.

I would have loved to see something with more intensity, lore, and explanations behind the presence of magic and your own character’s burgeoning powers. As it stands, it works just fine, but it hints at something greater.

This same feeling of potential extends to the gameplay. Levels are fairly open, with plenty of things to break and hidden cards that allow you to add parameters and additional difficulty to your subsequent playthroughs. The cards themselves add some incentive to play again with varying changes, but they don’t do enough to make the gameplay feel entirely different.

Enemies will appear throughout each level and come in several different varieties. It’s here that the game shines with the spell system. Something simple, like a fireball, just requires you to turn your wrist and pull the trigger. Once you have it, you can look at an enemy and throw it to attack.

The lock-on system works well for the most part, but it can feel a little loose when you’re in the thick of battle. More complex spells, like the bow and arrow, require you to make gestures with both hands.

The spells are upgradeable, but there are only six in total, which limits your options. You’ll be using the same few spells for most of the game’s length. More spells would have be great, or even just more variety in how they are upgraded. As it stands, repetition can set in after extended play periods.

It all works really well for the most part. The problems arise when you’re being surrounded by enemies that love to charge in with zero regard for their well-being. During times like this, the tracking can easily falter as you’re desperately waving your hands around to cast spells.

The game does offer plenty of settings to tweak your setup, however, and I appreciated that. You can specify playing standing or sitting and even adjust your in-game height accordingly. Full smooth movement and turning are both available, but teleporting is required in specific situations.

Honestly, having the teleportation in combat was a life-saver for me because it allowed me to jump around when enemies surrounded me (which was pretty often). Navigating to floating platforms or higher areas will also require you to use teleportation. Beyond those situations, however, you can have smooth movement and turning if you like.

Once you’ve finished the campaign, The Wizards: Enhanced Edition also offers an arena mode with challenges and leaderboards. Those who love chasing a high score will find plenty of reason to come back and play the arena or use the cards to increase their score multiplier in the campaign levels.

Everyone else will enjoy the vibrant worlds and gesture-based spellcasting, but even this magic will wear off before the game’s end. 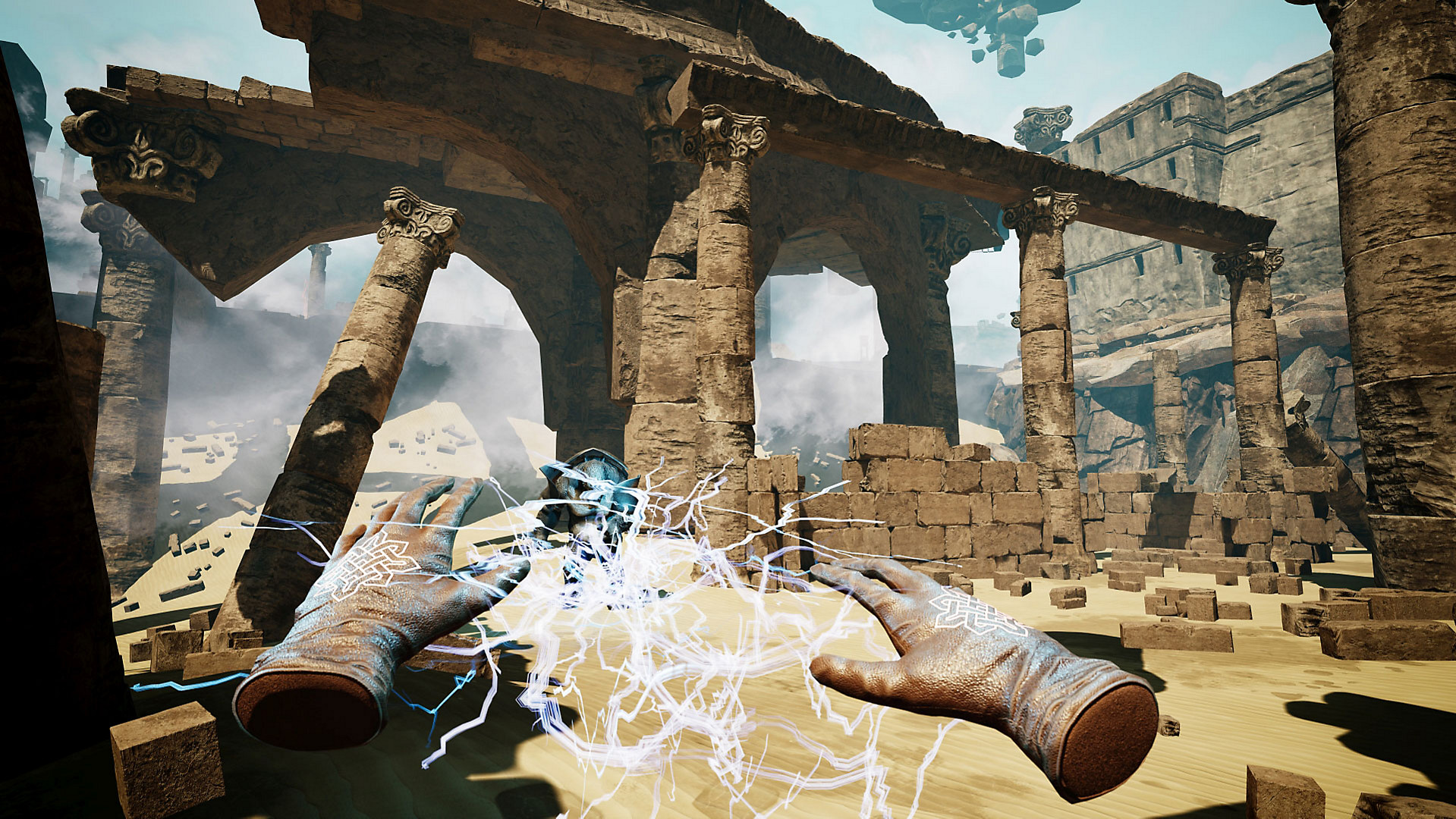 From a graphical standpoint, The Wizards: Enhanced Edition looks great in PSVR. Textures for the most part are pretty crisp, while spells and particle effects look excellent in motion. The only major downside to the presentation for me was the enemies themselves.

The way they react and collapse from spell attacks looks stiff and seems to run at lower frame rate than the rest of the game’s world. This leads to them looking out of place and somewhat jittery compared to the smooth nature of your spells and the effects.

On the basis of fulfilling every gamer’s dream of being a spellcaster, The Wizards: Enhanced Edition succeeds immensely. As a total package, however, the game has a lot of solid foundations, but rarely takes the extra step to make them realize their full potential.