The legend of Theseus and the Minotaur is one of the most widely known Greek myths out there. Being trapped in a winding maze of stone while a terrifying beast stalks you is the perfect setup for any good story. Now, we have the chance to live the legend in glorious VR with Theseus.

Does this virtual trip through the labyrinth carve its name into the walls of history, or does it crumble under the weight of its source material? Let's find out!

Our Hero Awakens: A Legend Retold

The story of Theseus takes the same premise as the Greek myth and runs with it. You awaken within the labyrinth and are guided forward by a mysterious ethereal spirit that speaks to you in a strange language. Her dialogue appears as text in the air, making the subtitles a part of the visual experience.

Beyond her narration, you won't get a lot of story content delivered directly to you in Theseus. Her bouts of narration do offer some interesting backstory, but the rest is left to interpretation as you witness the events of the game.

If you pay attention and look around the environments, you'll find collectibles of a sort that contribute towards a true ending if you find all of them. If there's one thing Theseus nails, it's the atmosphere and the feel of the adventure.

Part of this is due to the detail art style, but the world of Theseus really comes alive in VR. This medium allows the labyrinth to exist all around you and creates a phenomenal sense of presence.

While Theseus himself is a silent protagonist, the story managed to make me care about him and the situation he found himself in as I began to understand the nature of the situation.

It's a little too hands off in terms of pacing, but when it hits the right beats, Theseus really offers a compelling narrative. The vast stretches that are devoid of any story bring down the overall excitement of the adventure, and at 2-4 hours, that shouldn't be happening.

A more consistent delivery of story or lore would have helped keep me engaged throughout the stretches of silence. Otherwise, I enjoyed the storyline of Theseus as a creative spin on the original myth. 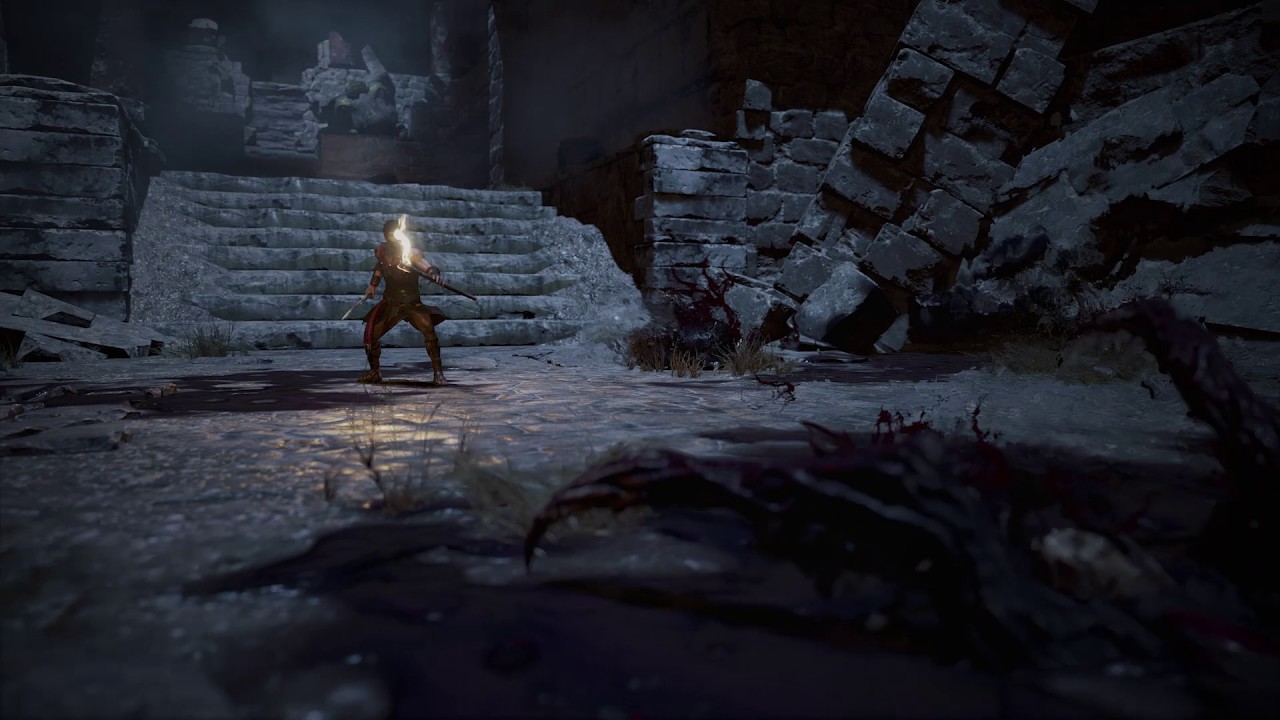 If Theseus was a standard game that you played on a TV, it would be cool, but it would lack a lot of what makes it interesting. Using a mixture of fixed perspectives and over-the-shoulder camera angles, Theseus leverages virtual reality to make you feel like a silent observer in this world.

The close-up shots behind the should offer and excellent perspective and provided some of my favorite moments. The fixed camera angles worked as well, if only because of the fact that I could look around and see myself sitting on a ledge or spot nearby pots and rubble.

I felt like I was in the world, watching Theseus navigate the labyrinth as if I were a fly on the wall. For people who sometimes feel motion sickness, this kind of solution in third-person VR games eliminates the problem entirely.

When it comes to gameplay, Theseus does everything well, but nothing great. The navigation and climbing are all fine, but not incredibly responsive. The combat works well, but it's a simple affair that doesn't have a lot of depth.

Where Theseus truly makes an impression, is during its set-piece moments. These are a double-edged sword, though. In some situations, the minotaur will appear as you hide from sight.

The towering beast is far more than just a bull merged with a man. No, Asterion, as he is known, is a terrifying thing to behold in VR. When it arrives, the sense of scale is incredible. There are plenty of tense encounters that left me sweating inside my headset as I gripped my controller with white knuckles.

While these set-pieces were always exhilarating, they also had incredibly difficult timing in many cases. For example, in one situation I had to sprint to a nearby hole in the wall to escape before Asterion reached me.

As I closed in on the hole, the game goes into slow motion to accentuate the moment. The problem with this is that I often miscalculated my approach while trying to navigate this moment.

The slow motion, while cool, got me killed more times than I would like to admit. This is just one example where a really interesting moment is soured by a frustrating requirement that is either difficult to hit, or unclear to the player.

It's a shame too because Theseus has some really cool ideas, but a lot of them take a surface level approach. It's incredible setpiece moments also have less impact as a result of their strict requirements or unclear objectives. If I have to repeat the same set piece ten times, it loses its charm.

Theseus' greatest strength, by far, lies in the presentation. The graphics on display here are easily some of the best I've ever seen in VR. While textures don't hold up super close or very far away, the immediate image in front of you is nothing short of incredible.

The amount of detail in Theseus himself, the Minotaur Asterion, and in the environments really make this game stand out from the pack. Asterion himself is an incredibly designed and rendered Minotaur, and easily the star of the show.

The developers took a kind of grostesque approach to the creature, giving him massive horns and thick fur around his face. His chest is pulled apart, showing exposed ribs and an empty chest cavity. It's a horrific twist on the Minotaur design and one that I absolutely loved.

Other little touches like the reflection of light off of liquid surfaces, and the way embers float towards you from the torth Theseus carries really sold the VR aspect of the game.

I have no qualms whatsoever with the presentation here. The only complaints I have is that the story isn't more fleshed out, and the gameplay can be a mixture of surface level mechanics and frustrating failures.

If you go into Theseus understanding that it's greatest strength lies in the VR implementation and presentation, then you'll have a really good time. Just remember to taper your expectations around the gameplay and combat. Other than that, the labyrinth awaits!