Strategy sims come a wide variety of styles, but I'm hard-pressed to think of any that put you in the shoes of a police chief trying to keep his head above water during the last 180 days of his storied career. This the scenario that This Is The Police places you into.

You play as Jack Boyd, and it's your job to not only keep everything running smoothly, but also come up with $500,000 for your retirement before you are unceremoniously kicked out of your position or taken down by the mob. Does this game proudly earn it's badge, or leave you sleeping with the fishes? Let's find out!

Jack Boyd is an excellent character voiced by none other than Jon St. John of Duke Nukem fame. Jon's gravely voice does a great job of setting the crime noir tone that This Is The Police is going for. While there's times that I can hear Duke coming out in the dialogue, for the most part, the performance is very well done.

The writing is sharp, with a few awkward moments here and there where a joke doesn't quite hit home. Overall, though, the comic panel cut scenes do a great job of making the police chief and supporting characters feel like real people.

As you progress through the game, the overarching plot will continue to develop in some new and exciting ways. New gameplay elements and features are added as time goes on, and big decisions have a lasting impact on the future of your play-through.

For a strategy game, it has a lot more story than I would have expected. The story beats during milestones are actually quite good and it makes you wonder if the next day will send you straight to the office, or into another rough situation.

It makes the game feel like the life of a real person with a really important job, and less like a series of days that all play out in a similar fashion.

As you enter each day, you'll be faced with new challenges that come in several different flavors. Sometimes it's petty crimes and thefts. Other times, it's full-blown homicide investigations, and other times it can even be the local mafia calling in a favor.

While the actual crimes and their descriptions can start to run together during your 20 hours or so with the game, I really enjoyed how much story This Is The Police managed to integrate into the strategy sim experience, and I think other games in this genre could easily benefit from doing the same.

The bulk of your time spent in This Is The Police, will be spent managing the everyday tasks of the police in the city. This is done using an isometric map of Freeburg that shows you the locations of tasks in real-time as the day goes on.

You'll see little pop-ups notifying you of crime, investigations, mob favors, and everything else. New tasks also appear on the left column of the screen, while finished reports appear on the right.

Along with this, you'll have see the layout of your police offers for the current shift, their status, and how long you'll need to wait until they're ready to go out again. On the top of the screen, the day, time, and your current saved salary are also given to you.

The basic interface here is clean and simple, which is great considering this game started life on the PC. You won't miss your mouse too much here as the developers have done a good job translating everything to controllers.

Exterior menus can be accessed for things like hiring new cops/detectives, sending requests to city hall, and other mechanics that emerge as you progress through the game that I won't spoil here.

Thankfully, going into these external menus pauses the world's time, so you don't need to worry about missing a crime while you're managing something else.

When you jump into a basic crime, you'll get a description and the option to send a certain number of cops or support teams based on the intensity of the crime and your discretion.

Sometimes you'll get hit with false alarms, and other times you'll find that you didn't send enough people. Outcomes vary, but the best result is getting the offender in cuffs, with no casualties from police or civilians.

For investigations, you'll need to send detectives and officers to investigate and then piece together the sequence of events yourself. These are pretty cool, but when you're finished investigating, you must then send someone to arrest the culprit. In later cases, you'll have to choose between multiple locations. 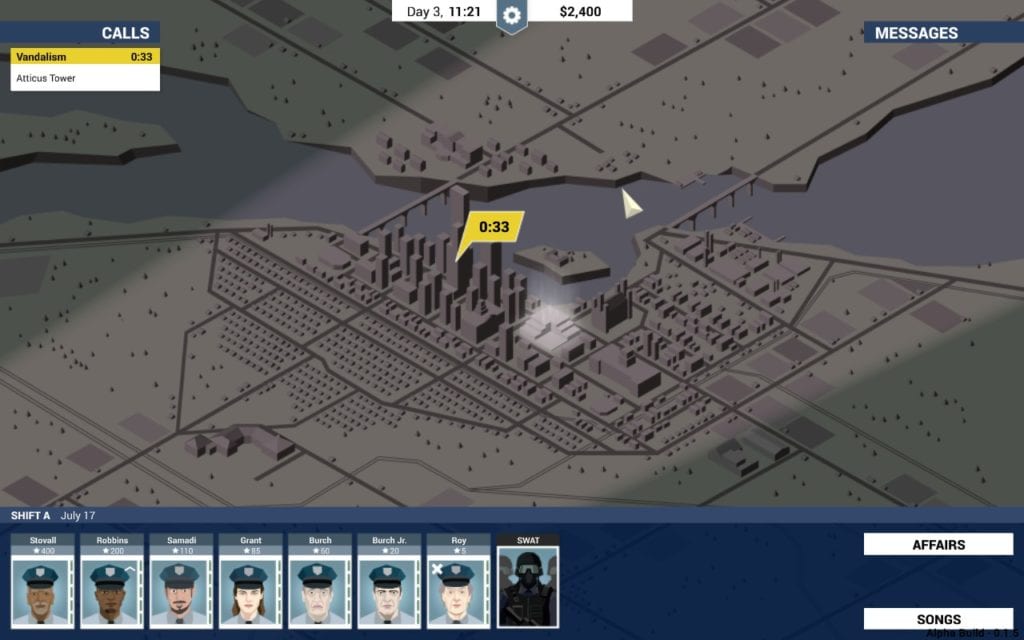 That being said, you'll lose good people. Sometimes it will be a mistake, other times an accident. While the majority of these instances are fair and just, some of them can be a little intense in their requirements.

For example, early on in the game you'll be asked to make at least 50% of your staff female by city hall. You have a very small amount of time to complete this, which would be fine if you could actually hire female officers.

In my playthrough, despite repeated attempts to check, there were never enough female officers to fill my employee slots. Another city hall request asked me to take down a local gang within a time limit. While this one was more plausible, it was still extremely difficult to do in the short amount of time I had.

I imagine part of this comes down to elements of the game that are randomly generated, but it did lead to some frustration. On top of this, I also had some other small nitpicks, like the fact that the music you play for the day doesn't loop or move on to something else, leaving you with vast moments of silence unless you manually put on music.

Frustrating variables and random elements aside, This Is The Police is a solid game for those who enjoy strategy sims like this. While the day-to-day activities can become repetitive after several hours into the game, I found myself constantly coming back to This Is The Police more and more, even after finishing it.

This Is The Police uses a very simple art style with a kind of polygonal texture to everything and blank faces for the humans in the game. It reminds me of the style used in another PC game called Orwell.

The menus are simple and sleek, the comic book panel cut scenes do just fine, and the isometric view of the city works really well. I like the option to play music in the background and purchase new records.

If you like strategy sims, tough decisions, and a good dose of crime noir, This Is The Police is a great option, and well worth your time. Just don't be surprised if it gets a little repetitive during your last 180 days as a police chief.