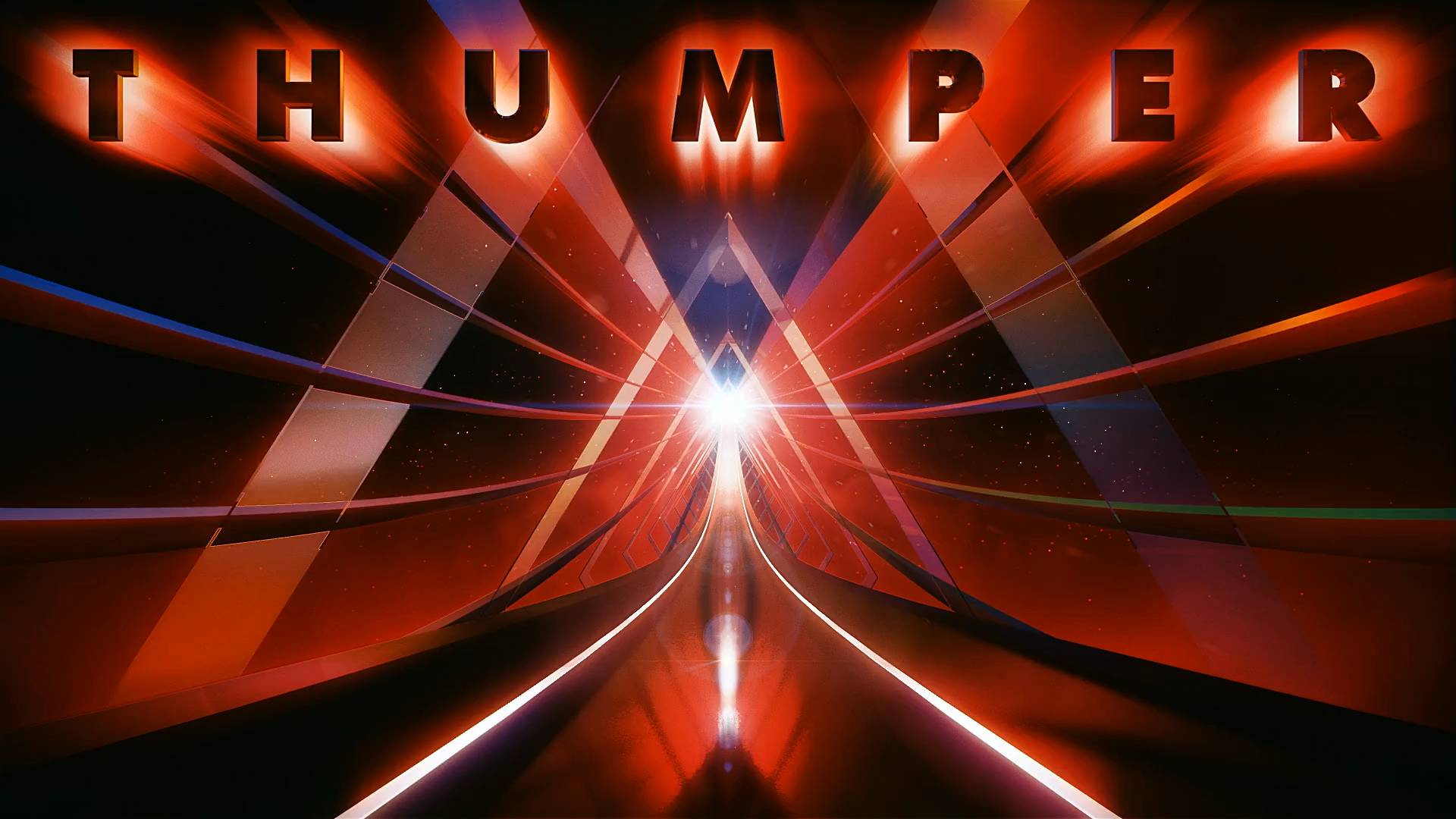 Thumper is a game developed by indie studio Drool, and they’ve described it on numerous occasions as a “rhythm violence game.” That category alone had me interested in this title before I even knew it was going to be compatible with PlayStation VR. Watching gameplay of this title makes it quickly apparent that the category fits.

Not only that, but the sheer intensity and the visual imagery that looks like it was ripped from one of H.P Lovecraft's nightmares makes me feel like this is the first and only rhythm game to also classify as a horror game to some extent. I know that sounds ridiculous and a little more than pretty awesome, but let’s explore what this game is all about.

The Journey of a Lone Chrome Beetle

Thumper doesn’t have a story, but that doesn’t stop it from building a very strong atmosphere and world for your intense and somewhat terrifying journey. In the game, you play as a shiny chrome beetle that is barreling down a metal track suspended in an endless abyss.

As you travel through the game’s levels towards the incredible boss fights, this little beetle’s journey is the stuff of nightmares. Strange neon tunnels will surround you as walls approach on either side. When you emerge back into the darkness, you’ll see everything from strange geometric shapes surrounding the track, to long and thin tendrils that pulsate in perfect rhythm with the music.

Since this is a rhythm game at heart, a huge part of the experience is the music. Thumper doesn’t use licensed music, but it does have some incredible beats and harsh, pounding music that matches your movements on the screen.

The boss battles have you building up to timed attacks that send a pulse rocketing down the track and into the monstrosity that looms in front of you. Everything about the game is violent, but also satisfying. There’s a satisfying crash when you slam into a wall that comes at you, or hit several obstacles with the perfect timing.

It all fits together into a beautiful harmony between the visuals, the music, and the gameplay. For a rhythm game to succeed, this is an absolute requirement and one that Thumper fulfills with flying colors.

Simple to Learn, Difficult to Master

Thumper’s gameplay, in theory, is very simple and straightforward. You use one button (The “X” button) and various directions of the left analog stick. The game starts out with some simple mechanics that any rhythm game player (or gamer in general) will pick up easily.

You’ll grin the first time a wall comes up and you slam into it with your backside as you grind along the surface. You’ll love that feeling when you charge through several obstacles with a satisfying crash.

As the game goes on, new mechanics are added frequently. Sometimes you’ll even see a twist on a previous mechanic that adds another layer of difficulty. Each level uses a specific song where you’ll always return to the chorus and relish in those familiar beats.

Of course, the verses will throw some curveballs at you, and the incredible boss fights will absolutely terrifying you as you try to stay sane while dodging, jumping, slamming into the obstacles the game throws at you.

Repeated failures will have you repeating the same motions in certain levels more times than you would like, and a repetitive feeling can set in, but once you conquer it and experience the next challenge, that feeling quickly fades.

My only real complaints here are very minor, but worth mentioning. The visuals for starters, while absolutely stunning and terrifying, can be distracting. When things get really intense, it’s sensory overload in both a good and bad way. Sometimes the overwhelming sensation was enough to trip up my rhythm and earn me a trip back to the last checkpoint.

If you mess up in Thumper, you won’t die immediately, but you’ll most likely lose within a few seconds. Once that pitch-perfect rhythm gets tripped up, I rarely recover, especially on later levels. It’s unforgiving, but in a good way.

This is also a game you won’t marathon. Thumper’s difficulty and intensity are both amazing, but it quickly becomes draining, and I never found myself playing for extended periods of time. When I finished a section, I was happy, but my heart was pounding and I felt like I needed to move on before I completely drained my stamina on one game.

This was no more true than when I played Thumper in VR, so let’s talk about that, shall we?

Playing Thumper in Virtual Reality: The Way to Go?

Thumper can be played on a standard screen or in VR. I first played it without the headset on, and I had a good time. That being said, VR makes it a totally different game. This is one of the launch titles that really showcases how immersive virtual reality can be.

When you place the headset on, the beetle multiplies in size. You’re floating just above it, but instead of a small chrome creature, in VR it looks like a massive spaceship on a highway into pure madness. As the track sweeps past, I could almost feel the rush of wind soaring past me.

All of the pounding beats and crashing impacts were multiplied tenfold in VR. WIthin minutes, my experience with Thumper in VR becomes a fully immersive one. I fall into a hypnotic rhythm where the game’s music flows through me and I go into a sort of autopilot that feels like gaming nirvana.

The boss fights go from terrifying monstrosities, to towering terrors that loom over you in the distance. They were already scary before, but in VR they take on a presence and a ferocity that makes me feel like I’ve stumbled into some dark place between reality and somewhere else entirely.

Case and point: Thumper is best played in VR, but even if you play it on a standard HDTV, it’s an excellent rhythm game. I never would have thought that the twisted geometric shapes and indescribable horrors of Lovecraftian tales would find their way into a rhythm game, but I couldn’t be happier that they did.