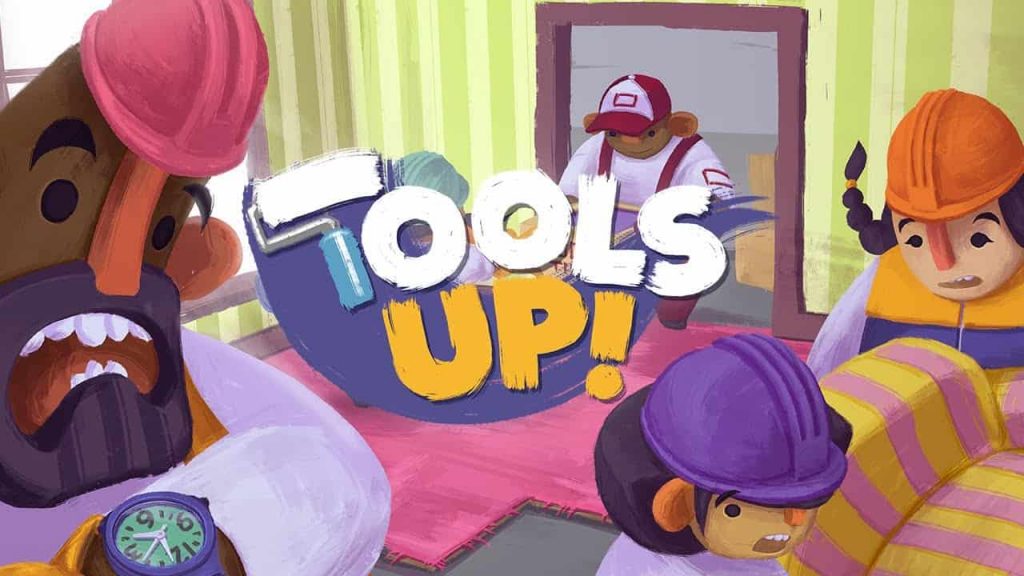 I don’t think it’s unreasonable to say that the Overcooked games have carved out their own genre in the realm of local co-op titles. The unique combination of complex levels, a variety of tasks, and the isometric view are all unique to that series. Taking inspiration from the concept, and if you’ll pardon the pun, renovating it a bit, Tools Up! Is a new local co-op game that offers a similar structure, but an entirely different goal.

That’s where the comparisons between it and Overcooked end. In this game you will work with your fellow partners to renovate buildings, which involves everything from tearing up carpet to applying wallpaper. Should you get in the DIY spirit and check this game out? Read on to see!

Home Improvement Shouldn’t Be This Fun

Tools Up! Immediately earns points for trying something different. There are a lot of party games trying to get you and your friends to grab their DualShocks, so a unique premise is key. As I mentioned earlier, each of the game’s 30 levels has you renovating a property.

You can do this alone, but it’s highly recommended for your sanity that you play with at least two players. This is how I spent the majority of my time with the game as my Player 2, Christina, is an enthusiastic lover of all things co-op.

There’s no story to speak of, but that doesn’t stop the game from having its own charms. The levels themselves are accessed as rooms of a towering building that lets you move up a floor each time you reach the required number of stars.

The themes of each level, noted as “biomes” in the trophies, also add some unique aesthetics and obstacles to each layout. Ice, for example, causes you to slip and slide across the area until you reach solid ground.

The characters are all various animals given construction outfits, but you’ll unlock some fun options like a Koala, a Llama, and even a snake as you progress. There is both a campaign mode, and a party mode that lets you quickly select from any of the levels without the need to navigate the overworld.

Diving right into the experience, the first thing you’re going to be missing is a tutorial on how to navigate the mechanics. The game does offer a layout of the controls and the occasional still image before a level to explain some of the more complex mechanics, but the lack of an introduction meant we spent some time stumbling around as we tried to make sense of it all.

Once we got the hang of things, we found ourselves knocking out levels left and right. Completing all of the tasks in a level and cleaning up before the clock runs out guarantees you three stars.

For the most part, this wasn’t difficult, but the game’s challenge does ramp up in the later levels. I imagine with more people things would actually get more difficult since you will need to assign tasks to keep everyone busy. With two people and strong communication, however, these home projects are hardly daunting.

That doesn't mean it’s not fun, however. Simple controls allow you to perform actions, applying new materials, and pick up trash with relative ease. Obstacles like furniture can be moved through cooperation, which makes for some hilarious moments, especially since I helped a friend move recently.

Ripping up carpet or wallpaper is simple, and you can drop the trash into a bucket provided at the beginning of the level. Putting things like carpet down is also simple, but with something like wood flooring or tile, you’ll need to wait for it to dry, making that space off limits. This allows for some strategy so you don’t block yourself into the room.

Wallpaper also adds an extra layer, requiring you to mix up an adhesive and apply it to the wall first. You’ll then need to lay down the wallpaper before it dries. Some of your paint, carpet, or materials is also delivered as the level goes on, so you’ll need someone to go grab the delivery before the person walks off with your stuff.

The game throws wrenches into the mix by having deliveries come for things you don’t need, or environmental things like ice and snow which cause you to slip and slide or slow down respectively. Even tipping over a paint can or dropping garbage can cause a hazard that will make you fall down.

Trash must be taken to the dumpster outside the house, but the aforementioned bucket can hold a decent amount. Of course, it’s also used for mixing, so you’ll need to manage your bucket accordingly.

All of this information is delivered to you via a blueprint that appears in each level. In later levels, we even had two blueprints where one superseded the other. In one instance, the blueprint didn’t spawn at all on one specific level, and reloading didn’t help. I’m still not sure if that was intended or not.

The blueprint system is fine for figuring out what needs to be done, but you also need to have it in your hand to rotate the map. I wasn’t a big fan of this because there were numerous occasions where we need to turn the map for a better perspective, and in my opinion that was something the player should be able to do whenever they like.

Other small issues that came up during our playthrough included the finicky targeting. Whatever you’re looking at is highlighted at the item you’re going to interact with, which is fine, but it can be too sensitive, especially in confined spaces. Trying to get my character to grab the bucket instead of the door, the other player, or the carpet on the ground in a small room is an exercise in frustration to say the least.

Overall, Tools Up! Succeeds as a unique take on the genre, but I would have liked to see more challenge and variety in the levels, along with a better targeting system and the ability to freely move the map.

Another Coat of Paint Would Have Been Nice 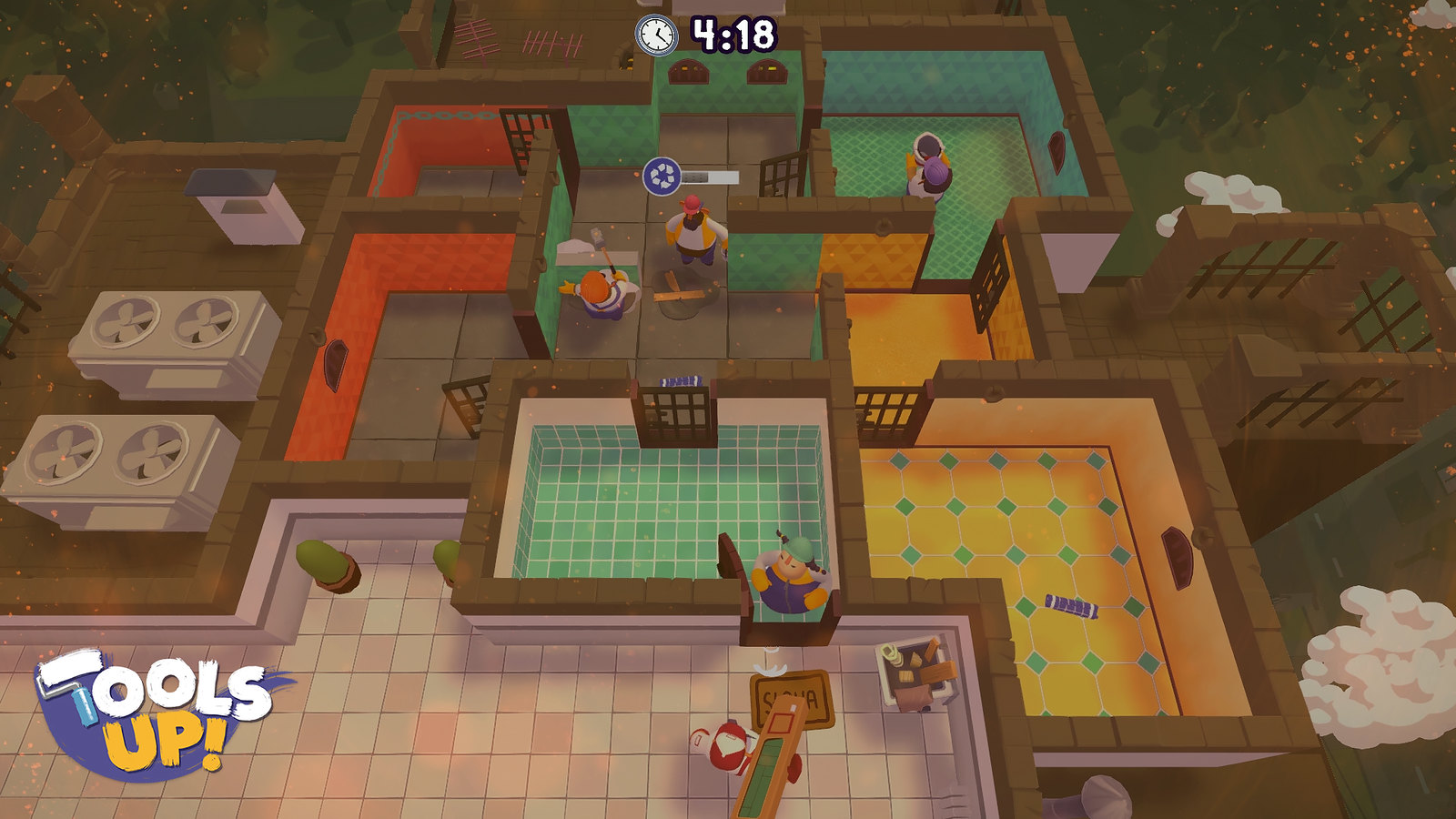 The style in Tools Up! is colorful and the characters are expressive enough to make them interesting. The music deserves a special nod for having fun tracks that keep things interesting from an audio perspective. One of the tracks is also very reminiscent of Toy Story’s style of music, which I really enjoyed.

Tools Up! is a solid party game and a fun co-op game as well. As the first home renovation game I’ve played, I had a lot more fun than the premise may suggest. The lack of a complete tutorial and the unreliable targeting did make for some frustration, but in the end this is one we will most certainly come back to.

A copy of Tools Up! was provided to PS4 Experts for review purposes.