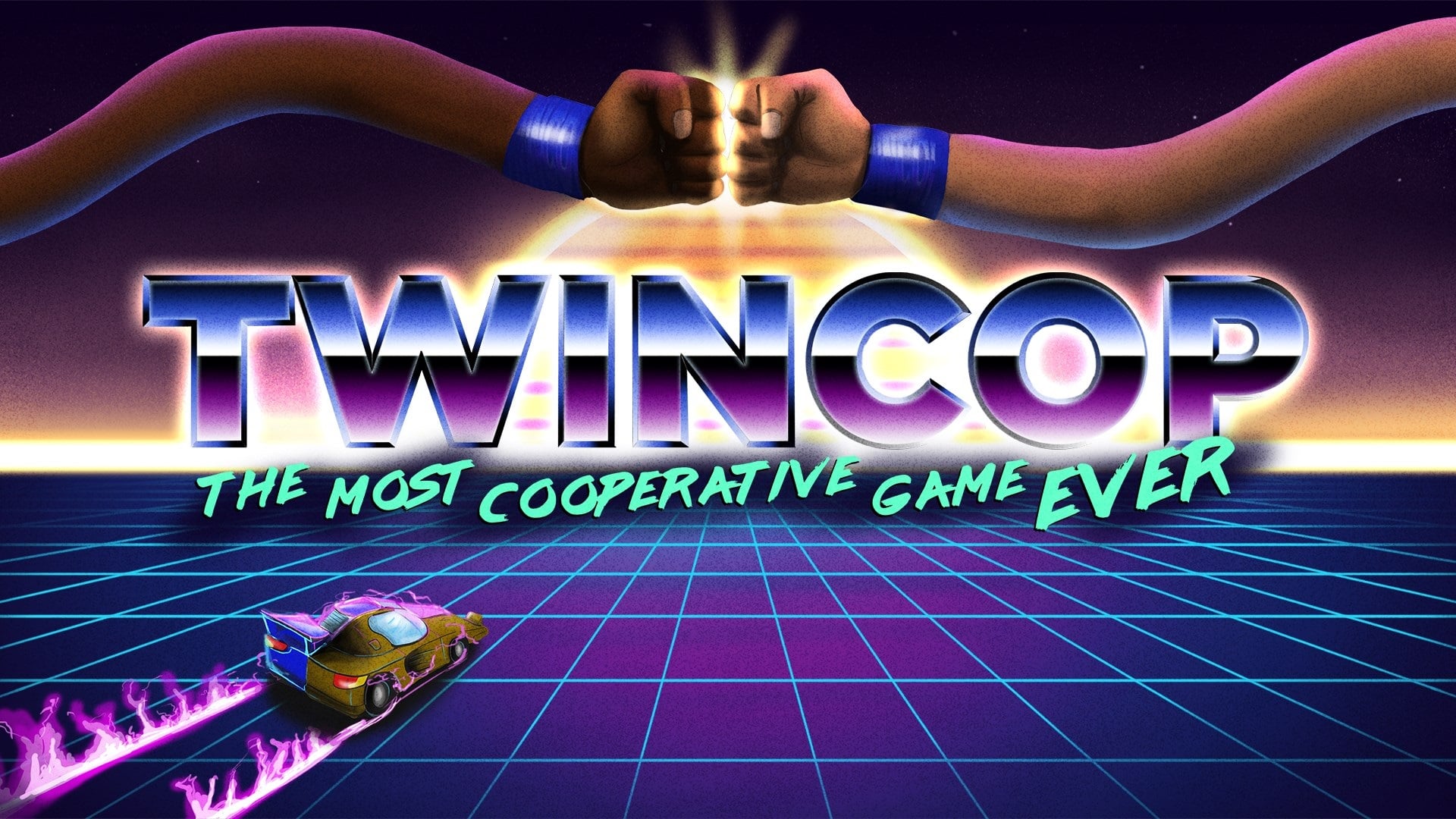 I’m always on the lookout for games that hit me with a pitch that causes me to do a double-take. I love it when a game’s premise causes an involuntary verbal reaction. TwinCop is one of those games. Billed as the “Most Cooperative Game Ever” you play as two halves of a single cop that was stitched together after a pair of officers were killed in a horrific pontoon boat accident.

It’s insane, but that’s part of the charm. The real question here is whether you should put your friendship or relationship to the test as you both try to control two halves of the same character. Let’s see how TwinCop fares.

Two Controllers, One Cop, Zero Chance This is Going to Go Smoothly

The story of TwinCop fully embraces the 80s aesthetic and leans heavily into what it knows is a bonkers premise. It begins with a recap of the pontoon boat incident that obliterated you and your partner. Through the use of technology that I can only imagine came from the RoboCop universe, you are both revived as two halves of a new, possibly superior cop.

As you get your feet wet, the police chief is constantly in your ear, offering encouragement and hilarious dialogue. His commentary is equal parts tongue-in-cheek and out of left field with some of the jokes, but I loved this aspect of the story.

As part of the unrelenting commitment to the concept, each half of the cop also gets to pick dialogue options. This means you’ll start one sentence with one player, and finish it with another. This can lead to even more hilarity as some of the combinations make absolutely zero sense.

I think there’s a fine line between over-the-top humor that works, and the kind that feels like it’s trying too hard. I felt like TwinCop leverages the style perfectly. It doesn’t feel like the jokes are forced, but they most certainly had me laughing out loud at least once per scene.

Solid 80s humor aside, it’s the gameplay that will make or break this experience. The game is absolutely intended to be played as a local co-op experience. There’s no online, but if you insist, the game does have a few single player options. Let’s start there.

You can choose to have an AI control the other half, or you can handle both sides yourself. The game makes it clear that the latter option is intended to be difficult, so only choose it if you want to wrestle with the controls on purpose.

I sampled some of the game in single player with the AI, but the majority of my time was with Christina, my official Player 2. In terms of the AI, it does a pretty good job. It has a slight delay to its actions that makes it feel like a real player trying to come to terms with the coordination. It’s not a walk in the park by any means, but it does do a good job of keeping up with you for the most part.

That being said, the AI is terrible at driving and makes me fearful for autonomous vehicles. Seriously, it would constantly steer me into walls to the point where I had to compensate for it. All of this is a moot point, however, if you’re playing co-op as the developers intended, so let’s talk about that.

The majority of the gameplay gives you an isometric view and acts as a twin-stick shooter. You’re able to choose from a nice selection of different cop combinations before you get started each of which will have a different special attack. I will say, the way it rips the cop off the body to replace it with another in the character select screen is both gruesome and absolutely hilarious.

To move effectively, both players need to push the left stick in the same direction. Colored arrows beneath the player’s feet show which way each person is going. Synchronizing this also provides healing as you move and charges your “twinsanity” meter (a special move that trigger slow motion for a time).

In addition to this, you’ll each have one arm to aim with and use your special ability. These range from tasers that chain to multiple enemies, or a claw that grabs enemies so you can use their weapons. The aiming works fine, but it can feel a little loose and chaotic as you’re trying to move and shoot in tandem with your partner.

It requires some serious mental gymnastics, but the game also throws a few curveballs at you. One example is bomb defusal where you must each use a separate hand to manipulate scissors and cut wires. This is predictably frustrating, which is kind of the point.

There’s also the aforementioned driving, where both players have to hold down the accelerator to go forward. Letting up on the gas turns the car one way or the other. This is why the AI drove me insane, because it would periodically let up on the gas with no warning or seemingly any logic behind the decision.

Other examples include things like navigating environmental puzzles or fist bumping, both of which test your ability to coordinate like no other game. These were my favorite aspects of TwinCop as they were the best use of the unique control scheme. The twin-stick shooting, by comparison, felt serviceable, but lacked any real excitement after a while.

There are different enemy types, but after a few hours of playing, I longed for the moments when something interesting would come up that requires quick thinking and coordination. If a TwinCop 2 is in the cards, my recommendation would be for the developers to leverage the creativity that led them to create things like the driving or the bomb defusing mini-game, as those were both interesting and fun (even if they almost started a few arguments).

Colorful, but Perhaps Too Chaotic 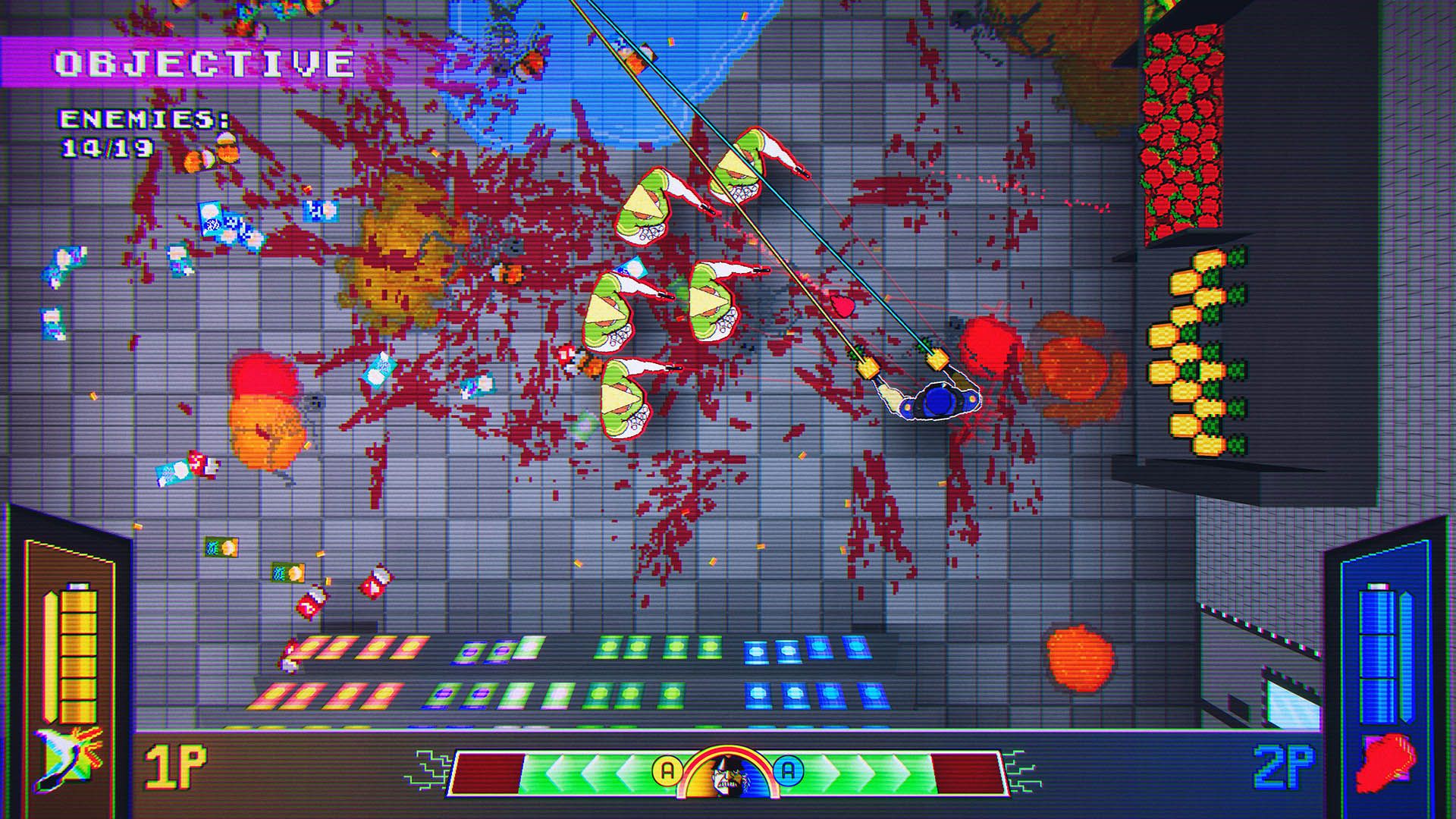 The aesthetic in TwinCop matches the 80s feel perfectly, with plenty of bright neon colors. The graphics are simple, but do a nice job of conveying everything you need to know. The only part that I found challenging was when the screen filled with enemies and the yellow/blue aiming lines sort of faded into the background.

I think making the trajectories for each player more prominent, or perhaps different colors would have made it easier to keep track of what’s going on when the proverbial excrement hits the fan. Instead, the chaos can make things confusing from a visual standpoint as large bullets and rockets flood the screen.

TwinCop is most certainly a unique co-op game. I wouldn’t recommend buying it solely for single player (though the options are appreciated). You’ll want to choose your second player carefully, as the intentional difficulty could easily spark frustration and result in you saying things you don’t mean (no, I’m not speaking from experience, why do you ask?).

Those who enjoy local co-op and support developers who keep it alive should grab their controllers and step into the shoes of TwinCop. You won’t find another co-op experience quite like it.

A copy of TwinCop was provided to PS4 Experts for review purposes.