Naughty Dog has always been one of PlayStation’s top developers. Since the days of Crash Bandicoot, everything they touch almost quite literally turns to gold. When the Uncharted series hit back on the PS3 for the first time, it was the killer app the console needed. The following games in the series only served to solidify that truth.

Now we have what Naughty Dog is calling the last game in this incredible action adventure series. Is Uncharted 4: A Thief’s End the send off this franchise deserves, or did Naughty Dog’s magic wear off? Let’s find out!

The story in Uncharted 4 is exactly what we’ve come to expect from the series, and then some. Lost cities, ancient treasure, tight spots, these are all hallmarks of the series. Uncharted takes everything you loved about the last three games and combines it into one powerhouse of an experience.

The story in Uncharted 4 has our heroes on the search for Henry Avery’s pirate treasure, but don’t let the simple premise fool you, this game’s story goes far beyond the globe-trotting adventure we’re used to (although that’s most certainly there). In this game we get to see Nate’s brother, Sam, for the first time in the series.

Played by Troy Baker (of course), Sam adds more than just a plot device to the new game. He fits right into the cast of characters as if he’s always been there. More than that, he adds a level of depth to Nathan’s character that I’ve never seen in the series.

Yes, it’s true, Nathan Drake is getting old in this one. He’s settled down and it seems like his treasure hunting days are over until his brother shows up. I’m keeping this extremely vague because I went into Uncharted’s story knowing only that his brother was in the game and pirate treasure was involved.

That’s all you need to know, because the less you know about a story like this, the better. Suffice to say, everything you expect from an Uncharted game is here in spades. What you won’t expect is the incredible level of character development that makes these god-like characters feel more human than they’ve ever been.

The exotic locations are varied in both their size and scope, the writing is sharp as always, and the voice acting bests most actors in Hollywood. It’s truly a masterpiece in both storytelling and in character development. It puts almost every game, and most movies, to shame.

This is the kind of story where, even if you’re not a big fan of treasure hunting tales, will still pull you in for hours at a time. The first time my girlfriend and I sat down to play it, both of us being Uncharted fans, we probably played for almost six hours without even realizing it.

I will say that the story feels very familiar, almost too familiar at first, but stick with it and things will soon pick up and enter new and exciting territory. Once you’ve been through the opening, things will also start to pick up in terms of character development.

Fans of the series will appreciate an early homage to the last games and an incredible easter egg that I won’t spoil here. The whole story of Uncharted 4 just stands out as a labor of love from Naughty Dog. They love this series as much as we do and they gave us a final story that is fitting of the series and brings everything together for one last, beautiful, explosive adventure.

If you’re coming for action, you’ll get it in spades. If you want set pieces that make modern action films look like they were made Microsoft Paint, you’ll get those too. If you want deeper characters, more development, and a few heart wrenching moments, you’ll have that as well.

It’s a perfect story in almost every way. The beginning was a little slow for my taste, but once things started moving, I was absolutely hooked. My only other complaint would be that the villains, while better than Katherine in Uncharted 3, don’t quite scare me in the way Uncharted 2’s villain did.

Other than that, this is better than any action movie I’ve seen in the last five years or more. It’s an incredible adventure, one that every PS4 owner must absolutely experience. If you’re an Uncharted fan, you’ll find a fitting send off for our friend.

Uncharted brought us a new type of exploration with smooth climbing and third-person shooting. Past games in the series have been linear in their level design, but Uncharted 4 opens things up with massive areas that have a lot of different locations within them. You’ll have one way forward, yes, but everything feels more open than before.

The climbing mechanics are tighter than ever as well. Drake will jump, leap, and slide with ease. While I still had the occasional hiccup in jumping from one ledge to another, everything seemed tighter and faster than ever before.

The same goes for the shooting. By default there is an aim assist that works really well, all things considered. It will pop to enemies when you aim down the sights on your gun and give you a little bit of wiggle room. It puts a lot of the action on auto-pilot, but if you’re not someone who plays a lot of shooters, it makes the game super accessible for all levels of skill.

It can be turned off easily in the options, and they even give you the chance to tweak everything before you jump into the single player campaign.

So, beyond the exploration and the shooting, both of which are great, there are some new mechanics that I really like. For starters, you get a grappling hook now that can hook on to specific surfaces to swing around the environment or climb up walls. You can also do an amazing melee attack while swinging where you drop down on enemies.

If you’re weapons are out of ammo, melee attacks like that will also allow you to steal the enemy’s gun right then and there in a stylish fashion. Speaking of melee, the fighting mechanics are much more polished and varied that the previous titles.

While you will find linear fight scenes, Uncharted 4 introduces new levels that are essentially open world where you can approach fights in an entirely new way for the series. If you want to tag enemies, stealth your way through the area, and make it out without killing a soul, you’re good to go. If you want to swing around, climb, and utilize every inch of these larger areas, you can do that too.

These large areas will also allow you to drive vehicles. The driving controls are solid and don’t require a huge amount of experience with racing games to understand. It’s in these open areas that the new gameplay is allowed to stretch its legs and really show off the power of the PS4 and the talent that Naughty Dog has.

All of it comes together to create an insanely polished, tight, fun, and amazing shooting/exploration experience in the single player mode, but that’s not all! Uncharted 4 also features a robust multiplayer, so let’s talk about that.

When you first attempt the online multiplayer, the game will have you run through a tutorial that acquaints you with the controls if you haven’t tried the single player yet. It also introduces you to the in-game shop where you can buy new weapons, sidekicks, and mystical powers inspired by previous Uncharted titles.

There are several multiplayer modes and challenges you can undertake as well where you fight with A.I characters. All-in-all there’s a lot to train yourself with before you take on real people. Once you’re ready for that, you’ll have a host of characters to choose from, many of which come from other games in the series.

You can choose from deathmatch, a capture mode, and plunder where you have to carry an idol to your base. It’s all fun and well designed, with maps that feel big enough, while not being so large that you never see any enemy team mates.

For those who enjoy competitive multiplayer, this has everything you would want, and it feels great as well. Now it’s time to talk about how it all looks.

The Best Looking Game Ever Made, Hands Down 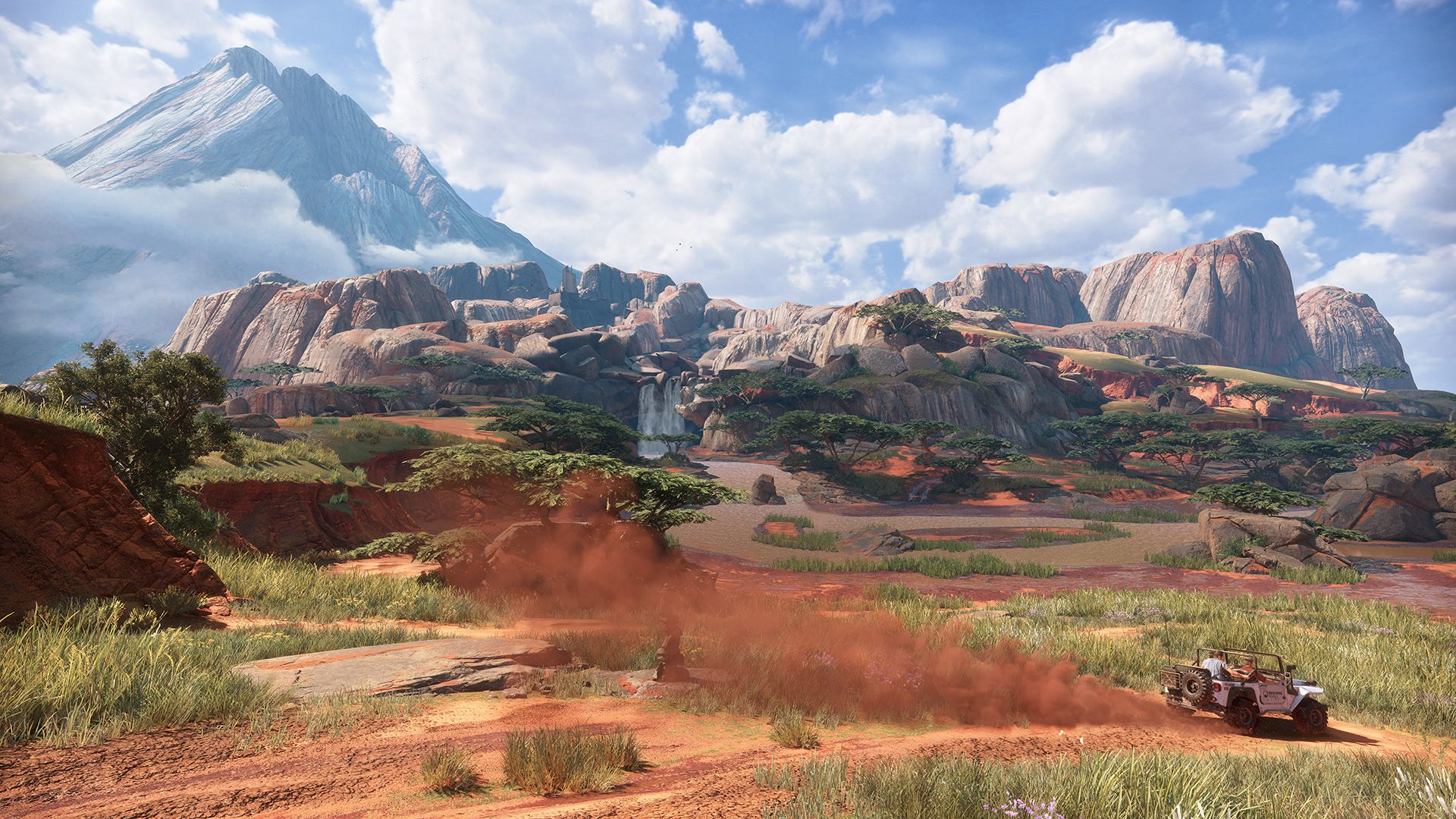 Technically, visually, and just objectively, Uncharted 4: A Thief’s End is the greatest looking video game ever made. Cutscenes and gameplay are both rendered in the same glorious engine. The character models are incredibly lifelike, with detail in the skin, eyes, animation, and just about everything else.

It looks more like a movie than Uncharted ever has, and the game continues to astound with every new area you visit. From tropical locations, to ancient cathedrals, to underground temples, it’s all here and then some.

It’s one of those things where seeing is believing, but trust me, this is the best looking game I’ve ever played, and I’ve played a lot of them. I honestly didn’t know the PS4 could pump out graphics like these, it’s amazing.

As a writer, I’m expected to have words to describe just about anything. Normally, I wouldn’t have trouble with said words, but Uncharted 4 is one of the few games that has left me speechless. There are no words to describe the masterpiece of a finale this is for the series.

I agree with all the comments I started playing uncharted 4 up to chapter 9 and yes it starts of slow but then draws u in and gets better And better the more u play.this is tuley a master piece well done naughty dog well worth the wait
I did liked the game. However I find it to ease and short. The grafics are amazing but something similar I tasted with the last of us. Puzzles so easy that you don't feel challenge. 8 points of 10