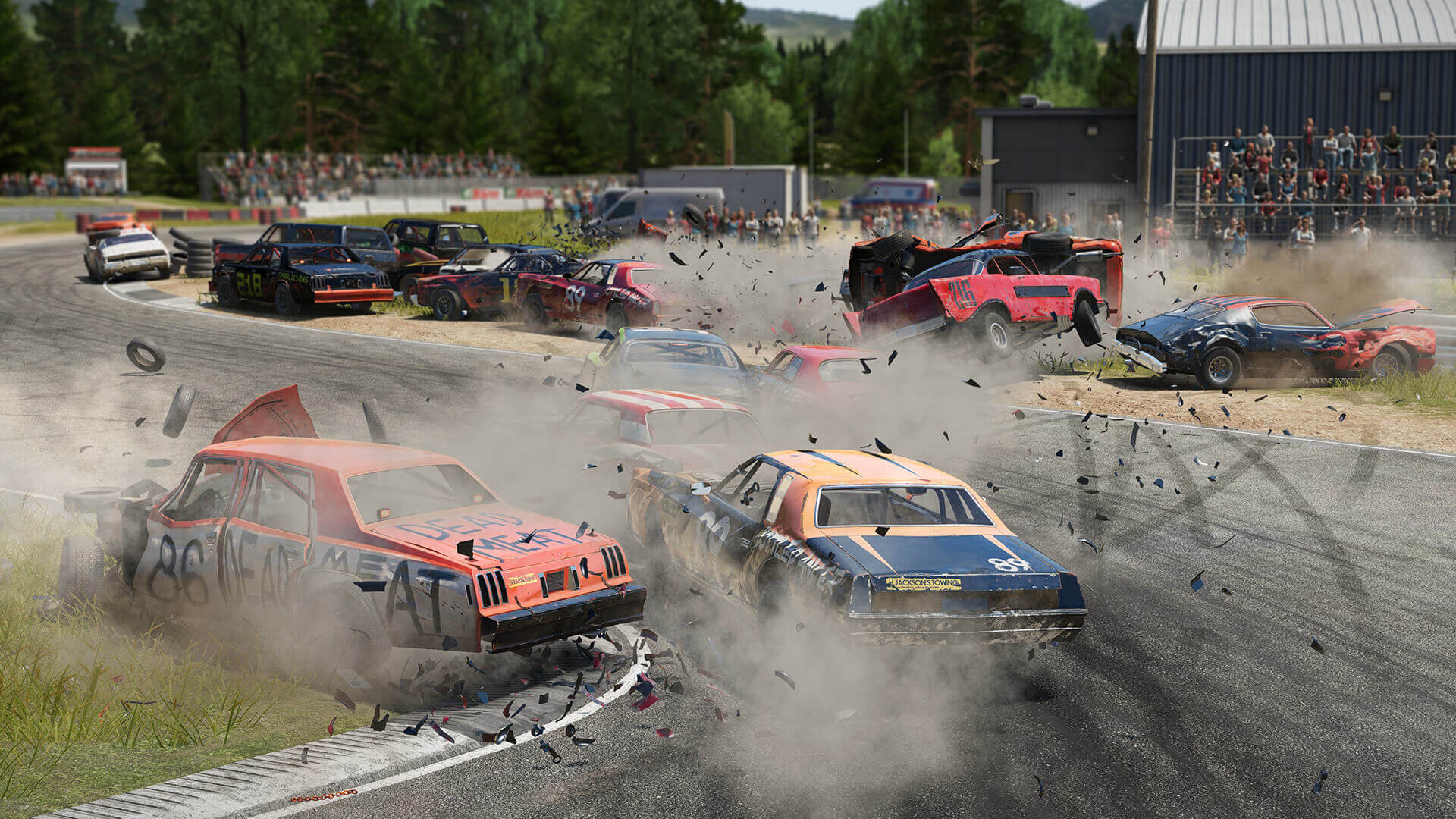 When it comes to racing games, there’s no shortage of choices. Some of them are faithful simulations with incredible accuracy, while others are simple arcade fun. Wreckfest, out now on the PS4, falls somewhere in between, but it does so like a bull in a china shop. I mean that absolutely as a compliment, by the way.

This combination racer and destruction derby game offers excellent presentation and insanely detailed destruction. It is enough to shatter your expectation? Let’s find out.

A Ballet of Pure Adrenaline and Destruction

When I think about my favorite racing games, I usually gravitate to the likes of Burnout or Twisted Metal before I think about the realistic nature of Gran Turismo. That being said, I think both have a lot to offer to the genre.

Wreckfest manages to juggle elements of both racing sims and arcade titles in a way that doesn’t feel unnatural. While there’s no tutorial to speak of, the menu cleanly lays out your options. You can participate in a respectable number of different events in single player, tweak your cars in the garage, choose to create your own events, or go online for multiplayer.

It’s a simple but effective selection. The options in the garage are impressive as well, but it’s here that a little guidance would help those less experienced with racing titles. Specifically you can tune aspects of your car that impact the performance. This allows you to tweak the handling and feel of your car to match your style.

It’s great, and the inclusion of multiple difficulties that allow for more realistic or more lenient destruction also welcome players of all skill levels. I particularly like how destruction to specific parts of the vehicle will affect an aspect of performance on the more realistic physics setting.

All of this is great, but the lack of an explanation makes it less smooth of a learning curve than I would have liked. Even just a few screens of text explaining your options would have been fine.

It’s a small issue, though, when you get into the gameplay. From destruction derbies that pack tons of cars (or lawnmowers) into massive arenas, to crazy tracks that loop into each other and encourage head-on collisions, Wreckfest is insanely fun in the moment-to-moment gameplay.

The AI racers are competitive on each difficulty, but also aggressive enough to keep things interesting. There’s a superb weight to each of the vehicles too that makes collisions with both other racers and elements of the track feel impactful and impressive.

A perfect example that illustrates how far game technology has come are those areas of the track where you see colored tires piled up near turns or corners. In older racing games, hitting those would be like hitting a wall. Pretty much uneventful as they were just a texture back then.

In Wreckfest last night, I was racing on a figure eight track while driving a neon blue school bus covered in neon graffiti. I took a turn too sharp and flipped my vehicle over. It slid across the ground before slamming into one of these tire barriers.

The tires flew all around me in a fireworks display of red and white. It was a spectacle worthy of Michael Bay, and moments like that are constant in Wreckfest. The destruction derbies, in particular, were my favorite way to experience the visceral physics and destruction.

Your car can go from a fine piece of machinery to something just shy of a metal cube over the span of a single event, and it’s truly a treat to see it all in motion. The only other aspect of Wreckfest that falls slightly short for me, however, is the multiplayer.

You can choose from different event types and quick match without problem, but there’s no way to team up with your friends or set up a group in the game. This was remedied by both of us picking the same game type and server, but I expected something more intuitive from a modern title.

These are small nitpicks in the grand scheme of things though. Wreckfest, at its core, is one of the best racing games on the PS4. It looks great, and more importantly, it feels absolutely fantastic to play.

Exquisite Detail and a Superb Soundtrack 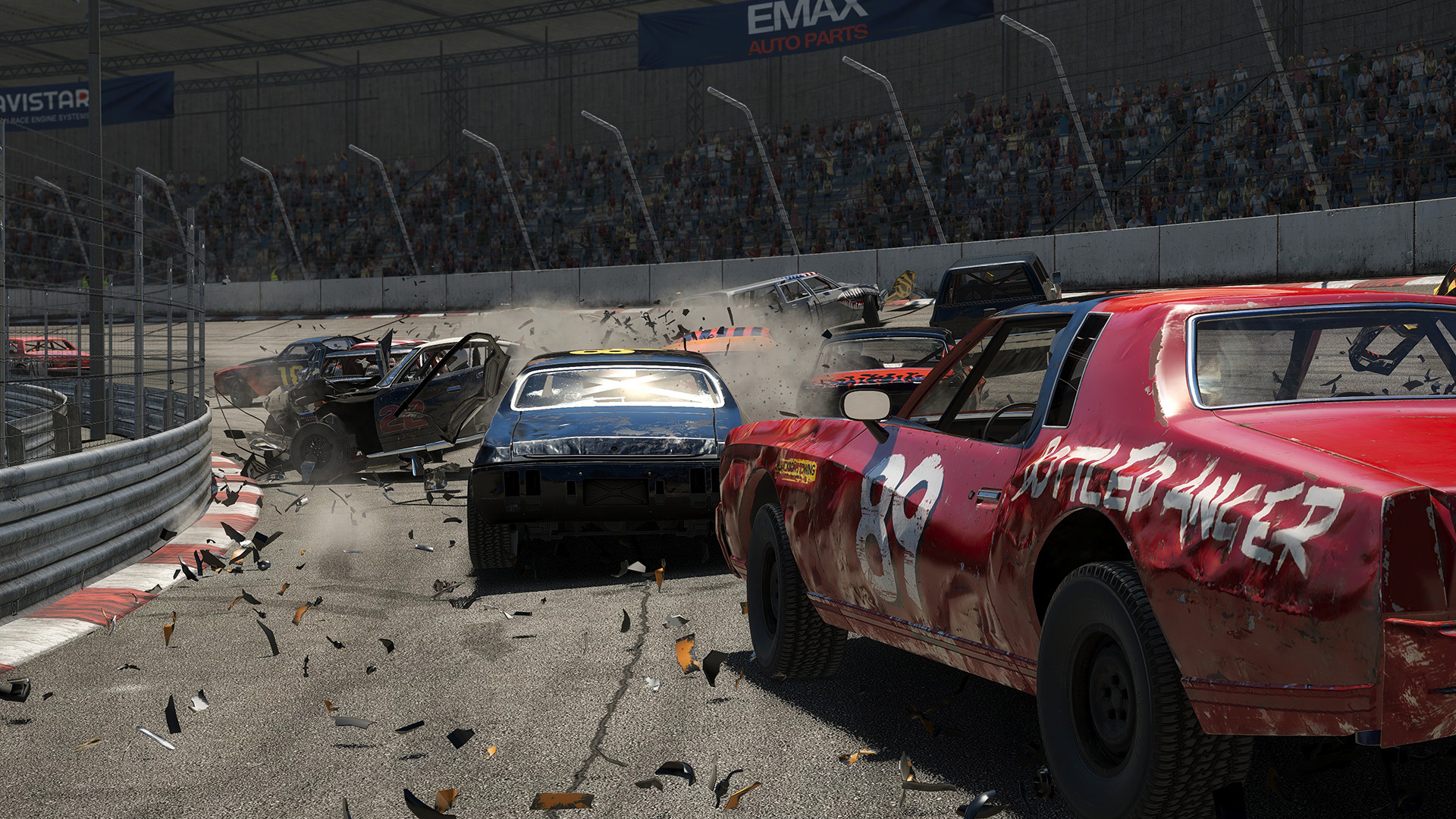 Purists could pick apart Wreckfest if it were trying to masquerade as a racing sim, but as an arcade racing game that flirts with elements of realism, you can’t ask for a better package. The detail on the cars, both before and during destruction, is simply second-to-none.

The way that metal grinds, bends, and tears looks almost photorealistic in motion. The weight with which the larger vehicles slam and tumble also feels appropriately weighty. On PS4 Pro it’s one of the best looking racers I’ve ever seen.

And the soundtrack, oh we need to talk about this one. I grew up playing racing games and Tony Hawk games that always had licensed songs perfect for the cadence of the gameplay. You don’t see that much anymore, but Wreckfest features a suite of licensed tracks that offer elements of punk, rock, and other modern genres as well.

The effect is a modern arcade racer with positively excellent destruction, paired with a soundtrack that feels like it came from a 90s game in the best way possible. Regardless of how you feel about the music, there’s no denying that it gets you pumped for each event.

As I said in the beginning of this review, I enjoy racing games. That being said, I loved Wreckfest. It’s an absolute love letter to the genre, with some of the best physics and destruction I’ve ever seen, paired with a soundtrack that makes my inner gamer grin from ear-to-ear. Racing fans shouldn’t hesitate. It’s time to hit the gas and jump into this awesome racer.

A copy of Wreckfest was provided to PS4 Experts for review purposes.