There's something immensely satisfying about beat-em-up games. They were once a staple of arcades, but they've since become a rarity on modern consoles. There have been some, but none really stand the test of time.

Now we have Wulverblade, a new beat-em-up for PS4 that takes place during the Roman Empire's invasion of Britain in 120 AD. Does this game pack great gameplay and satisfying action into one visceral package? Read on to find out!

A Backdrop of Blood and Treachery

From the beginning, I was impressed with Wulverblade's storytelling. The animated cutscenes are narrated with gruff and suitably dramatic voice acting that sets the tone beautifully for the upcoming levels.

Beyond these cutscenes, the game also packs a lot of lore and history into the menus. Since the setting is Britain in 120 AD during the rise of the Roman Empire, there's a lot of historical value here.

Wulverblade capitalizes on that by incorporating various unlockable bios, descriptions, and even real-life location videos that inspired the game. It's far more than you would expect from your average beat-em-up, and I was thoroughly impressed.

I've seen more and more games incorporating real history into their stories, but Wulverblade does this effortlessly by telling a compelling story in the moment while also offering plenty of educational and supplementary value in its lore.

With great narration and plenty of additional reading material, I found a lot to love about this game's story. Let's see if the gameplay matches this level of detail. 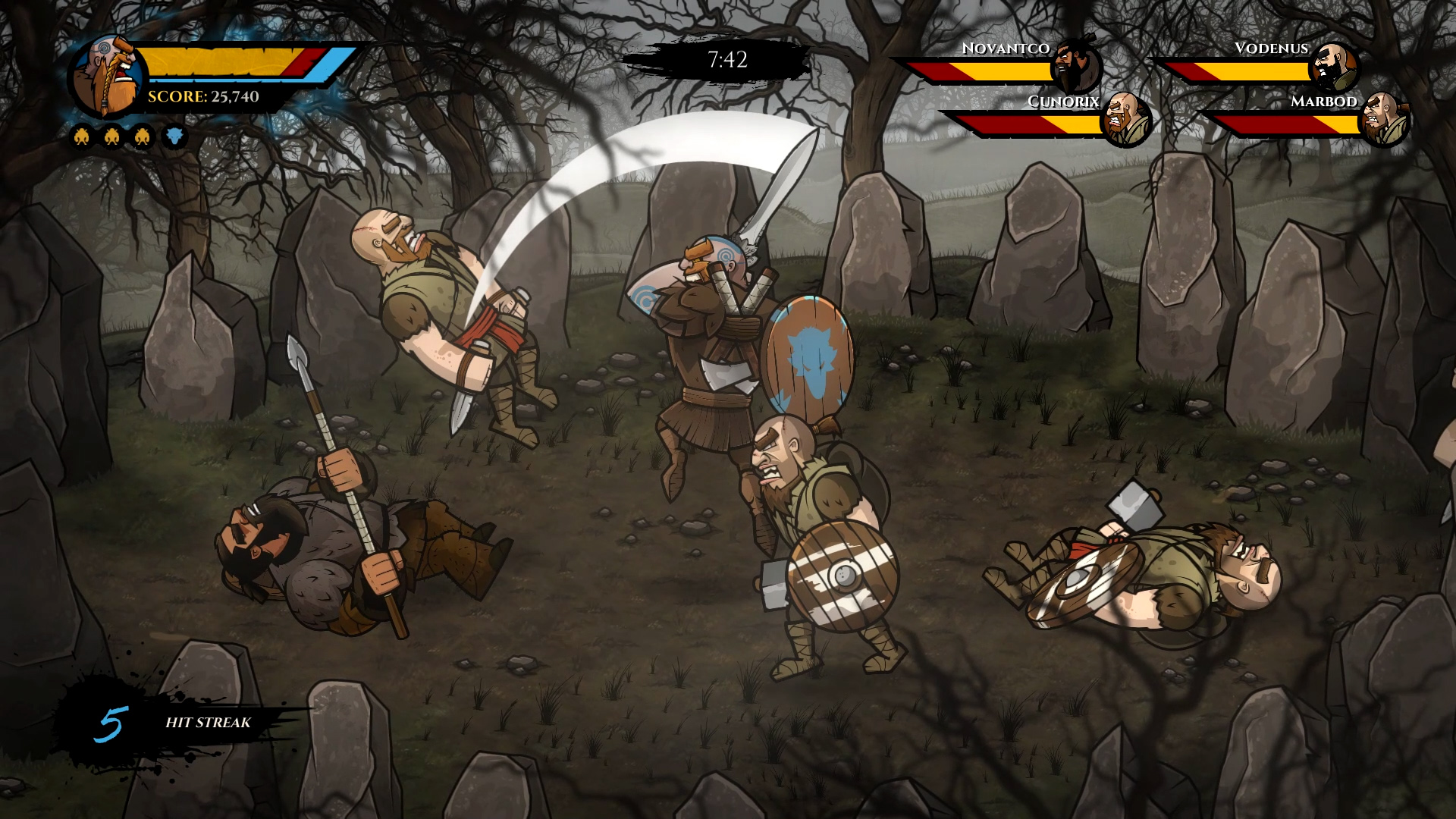 Wulverblade combines its unique visuals with a smooth frame rate of 60 FPS. The moment-to-moment gameplay is very satisfying, with blood and gore aplenty.

The developers didn't hold back at all with the violence. Limbs and heads fly almost constantly during combat, which works really well with the vibrant art and animation.

You have three characters to choose from that represent power, speed, and balance between them. There are also several modes to choose from and multiple difficulties to tailor the challenge accordingly.

If you want the classic feel with limited lives and no continues, you can choose that. If you'd rather have unlimited continues, but still retain some challenge, that's an option too.

Even beginners can enjoy an easier difficulty if you don't play a lot of beat-em-ups. Finally, an arena mode lets you try out different challenges and a horde mode to mix things up.

During the campaign missions, you'll move through various areas and face waves of enemies, followed by a boss at the end of the stage. There are some basic combos that get you rolling, but you'll also have access to items you pick up and heavy weapons you find.

It's pretty fun to pick up a severed arm and throw it at enemies, but the heavy weapons really make things interesting. I almost wish you had a heavy weapon throughout because it makes for some great combos.

You'll have access to a few special moves as well. When fully charged, you can become invincible for a short time and go berserk on the enemies. Once per level you can also call upon wolves to devour your enemies. These are really fun and work very well in a pinch.

Overall combat feels very responsive, but there were some moments when it started to falter. Specifically when blocking or dodging. In these moments, I would often have trouble getting the timing right because of small delays in the character's reaction.

Despite this, I had a lot of fun playing Wulverblade. It was also a blast in co-op. If you're even a mild fan of beat-em-ups, you'll find a lot to love here.

The presentation in Wulverblade is extremely polished. With a smooth frame rate and gorgeous hand-drawn visuals, it makes a strong first impression.

While not everyone will enjoy the blood and gore, there's no denying that everything is rendered with a flourish and style. As a beat-em-up, Wulverblade is one of the best I've played in some time.

It combines great visuals with historical value and satisfying gameplay. You really can't ask for much more from your arcade beat-em-ups. The only complaints I had were minor. Wulverblade is a great example of how this genre can grow and evolve into the future.