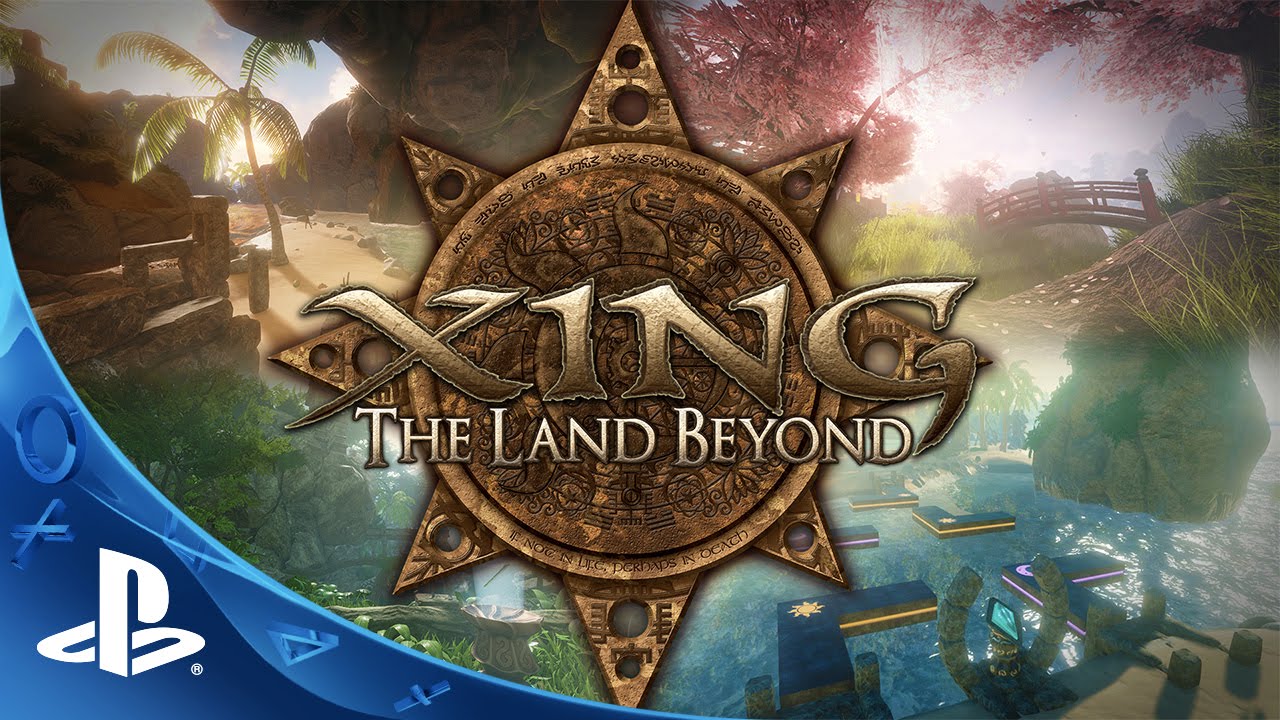 Countless books, movies, and games have experimented with the concept of what lies beyond death. The afterlife is a powerful setting for a title, after all, death is something we can all relate to in some way. Xing: The Land Beyond starts with your demise and takes you to a world brimming with mystery and beauty.

This puzzle adventure game supports both PSVR and standard play. It even has choices for frame rate or resolution when playing on PS4 Pro. Does this title offer a compelling reason to pull back the curtain and glimpse beyond the veil of death? Let’s find out.

A Serene and Relaxing World Full of Mystery

Having sampled both the VR and standard versions of Xing: The Land Beyond, I prefer the VR mode with Move controls, but either offers a powerful experience. The opening moments of the game illustrate the moment of death for the player, carrying through space and time until you materialize among plants, water, and sky.

You soon come across a stone golem that explains your situation to you. From here, you’re given access to the first of several worlds that you’ll visit from this hub area. The worlds themselves range from an island paradise, to mysterious ruins, to a vast desert and more. The variety is certainly there, but don’t let the soothing visuals fool you, Xing: The Land Beyond has more than enough gameplay to keep you engaged.

There’s a unique story in each world, conveyed through items you find on pedestals throughout the environments. In the first world, these are stone tablets, but they take different forms. Each one is narrated by the author. A nice touch was the way they were written, each one rhyming like the stanza of a soothing poem.

In each world, you’ll navigate the environment and solve an impressive variety of puzzles. Without spoiling too much, I’ll use examples from the first world. Here you have the ability to switch between day and night, thus bringing different ruins and elements to life.

One example is a puzzle where you must cross a body of water using floating stones. You can rotate the stones with a switch, but only some work during the day or night respectively. It’s a simple concept, but it gains complexity as you encounter tougher iterations of the puzzle.

Other puzzles are more organic, requiring you to create a source of fire and light torches or burn away obstacles. Even some doors will only open during the day or night. In addition to the main puzzles, you’ll also come across optional ones that reveal golden runes. The game tracks how many you’ve collected in each level, and of course, collecting them all result in meaningful rewards.

Beyond the main worlds, there are also mini-levels, including one exclusive to PS4. The puzzles were difficult enough to keep me on my toes, but accomplished puzzle gamers may wish they offered a tougher challenge.

That’s about my only negative remark when it comes to Xing’s gameplay. While serene puzzle games aren’t for everyone, not since The Witness have I played a puzzle game on PS4 that felt so in touch with it’s world. Admittedly, the puzzles here are nowhere near as complicated, Xing: The Land Beyond effortlessly ties together both the world and the gameplay into a wholly cohesive experience that I truly loved. Since Xing: The Land Beyond can be played on a television or in PSVR, I have to take a moment to compare the two options. PS4 Pro owners playing on the TV will also enjoy options for resolution or frame-rate. I preferred the smoother gameplay option myself, but the choice is there in the options menu. I did have the game crash on me once when I switched between the two, but it didn’t happen again when I restarted and switched the mode back.

For those who own a PSVR headset, Xing: The Land Beyond is an essential title for your library. The graphics in the headset are pristine, and the Move support offers smooth movement. While click turning is the only option, various angles are available, and the pace of gameplay doesn’t require fast turning anyway.

Playing in Xing in VR with headphones was nothing short of a transcendent experience. The game has excellent atmosphere and a brilliant soundtrack, but all of these elements are magnified tenfold inside of virtual reality.

The environments come to life around you with little details, while the tactile ability to pick up and interact with objects using Move controllers reminds us all why VR is such a powerful way to play. I loved that I could look down and see my footsteps in the sand on the first world. Looking out into the water, I was mesmerized by the way the water gently lapped at the shoreline.

The transition from the hub to each of the worlds involves glass and particle effects that I won’t spoil, but these moments were vibrant and awe-inspiring inside of the PSVR headset. Honestly, I think anyone can enjoy Xing: The Land Beyond on a television screen, but if you own a PSVR headset, it is absolutely the way to experience this title.

A Polished and Beautiful World 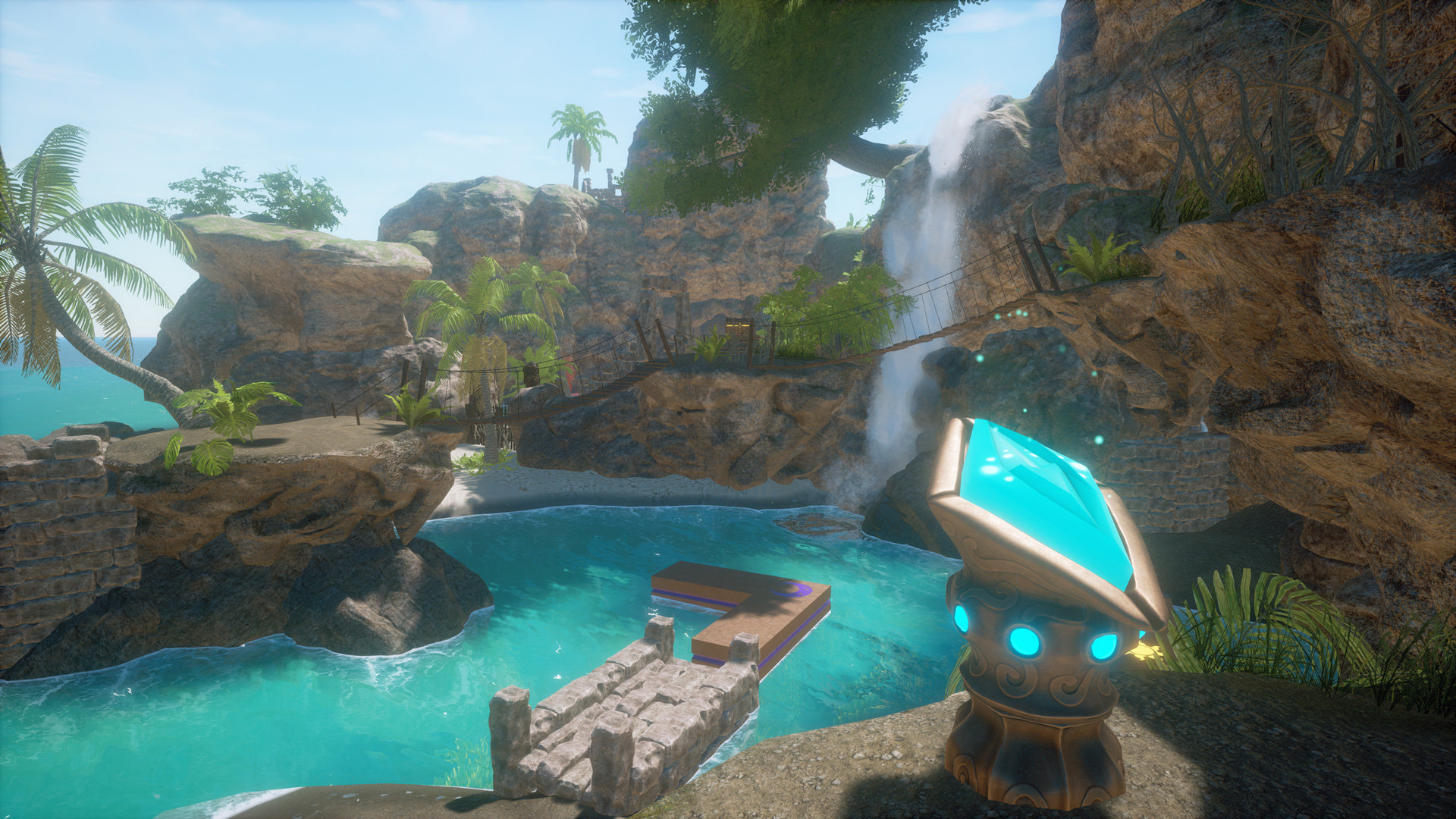 Xing: The Land Beyond is a gorgeous game regardless of how you play it. All of the details and subtle nuances look incredible on a television screen. The brilliant lighting, combined with detailed environments and subtle weather effects all bring the world to life.

Visually, it’s what you would imagine paradise to look like, but we need to also talk about the soundtrack, because it’s one of the game’s best elements. Composed by John Torkington, the game’s main theme “Adventure Awaits” is a rousing way to start the game, bringing the main menu to life with a bold melody and tribal percussion.

From there, the game transitions into a soft, serene, and almost comforting sound. The use of light string instruments (possibly harp?), along with subtle piano melodies, sets the perfect mood for a relaxing world that also seems to hide a deeper mystery just beneath the surface.

Other tracks bring in deeper sounds that lay the foundation for synthetic notes that pop out from the depths of the track. I always like to mention music in my reviews, but Xing’s soundtrack really blew me away with how it was able to convey so much emotion and add significant atmosphere to the environments.

If you can’t tell, I’m a big fan of Xing: The Land Beyond, especially in VR. As a major supporter of virtual reality in gaming, it’s titles like this one that really capitalize on the potential of the technology. I’ve never felt more wholly transported to a world than the way I did standing on the beaches of Xing’s first level.

Part of that is due to the excellent environments, part of the credit must go to the superb soundtrack, and of course, the engaging puzzles tie everything together. When I look back on this game, I struggle to find fault with it. Would I have liked more worlds? Of course, but the variety here was exquisite.

Could the game have offered more profound commentary on life after death? Sure, but the stories of each world conveyed a life well lived and meaning beyond what we see around us. The one crash I experienced didn’t derail the experience for me, and the developers have already released a patch in time for launch to address another known issue with VR that is now fixed.

Given the budget-friendly price, recommending Xing: The Land Beyond is as natural to me as breathing, despite the protagonists inability to do so anymore. While VR is the best way to experience this title, lovers of all things beautiful, serene, and occasionally mentally challenging should absolutely purchase and play this exquisite experience.

A copy of Xing: The Land Beyond was provided to PS4 Experts for review purposes