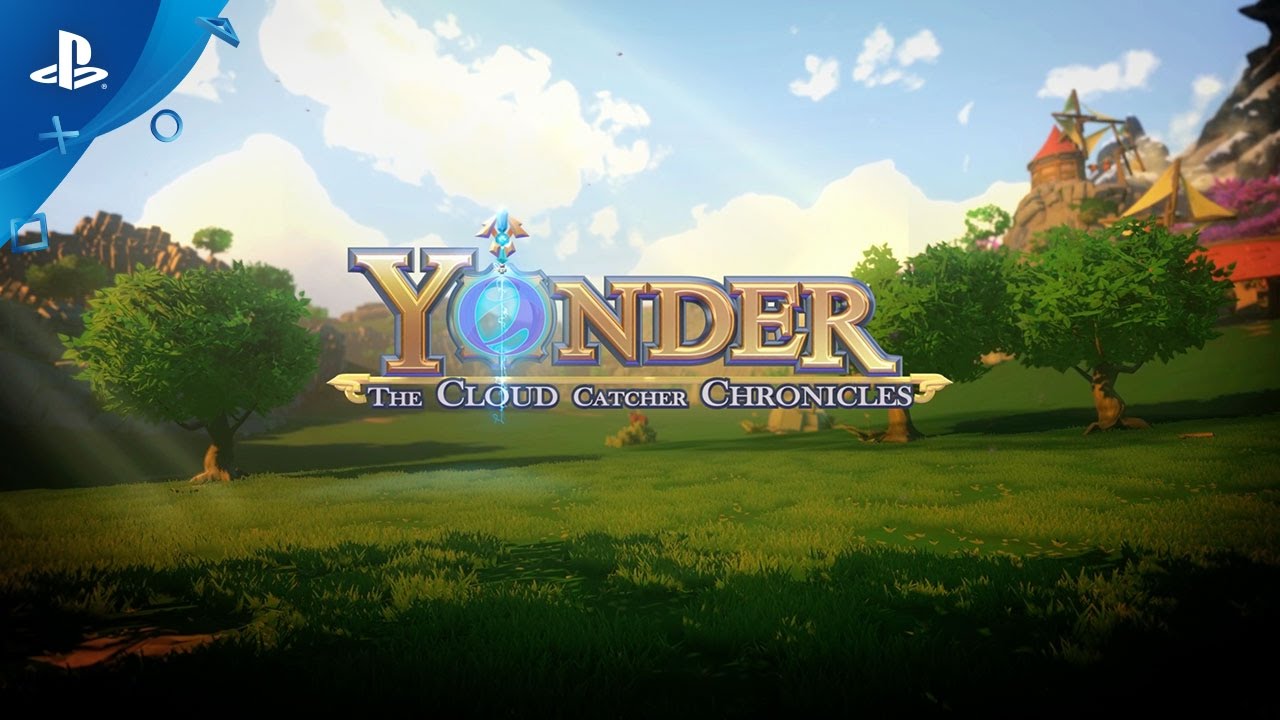 Today’s gaming landscape is wider and varied that it has ever been. Even so, you don’t have to go too far to find punishingly difficult games or action-heavy shooters. What if you just want to relax, explore, but still feel like you’re accomplishing something? Yonder: The Cloud Catcher Chronicles is here to answer that question for you.

In this admittedly beautiful game, you play as the survivor of a shipwreck who has washed up on the island of Gemea. The people here are fighting back against the murk, an evil force that has been corrupting the land. With a relaxed pace, no combat, and plenty of things to do, should you stop to smell the roses with Yonder, or does the easygoing setup put you to sleep? Read on to find out!

A Simple Setup With Zero Pressure to Proceed

Yonder: The Cloud Catcher Chronicles starts off with an exciting opening as your ship is destroyed and you are left to wash up on the shores of Gemea. A mysterious spirit informs you that you are destined to save the people of this island and destroy the murk once and for all. While this may seem like a pressing issue, Yonder never puts pressure on you to pursue the main storyline.

While I really liked this relaxed approach, it also made the main questline feel less important than it should have been. The threat of the murk seems real, but no one is too worried about it, which kind of takes out the teeth. It’s something you’ll need to deal with, especially as you progress, but it never represents a true threat.

The story leans heavily into themes of discovery, both inward and outward. It’s a simple tale that, while interesting, is never compelling enough to make you want to run through it. Now, while that may seem like a bad thing, it does offer a flip side that I found to be very positive.

Since the main quest doesn’t pull you in immediately, this leaves you with the opportunity to explore at your own pace and take on side quests from other characters in the world. These little mini-stories are pretty fun and entertaining. They also offer compelling rewards and valuable knowledge you can contribute to your various skill sets.

The world itself is also a joy to explore. There’s a sense of mystery and intrigue to the environments, and some of the hidden areas and environmental puzzles lend credence to the world, even if they don’t specifically tell a story of their own.

The writing, while simplistic, sits on a solid foundation. Character interactions range from simple to pun-filled conversations that had me grinning from the sheer cheesiness of it all. The sheer awe and wonder, combined with a cheerful and relaxing pace are really where Yonder: The Cloud Catcher Chronicles shined for me.

While I would have liked more urgency in the main plot, the game just felt like a breath of fresh air. In an industry full of dark and brooding worlds, Yonder comes forward with a story and a world that is brimming with a childlike whimsy and optimism not found in the modern era of gaming.

It was intoxicating, and even if the story and characters weren’t as deep as I would have liked, the cohesiveness of the game’s story and environment, combined with its structure, was enough to pull me in and immerse me in the sheer wonder of it all.

A Jack-of-All Trades: Something For Everyone Yonder: The Cloud Catcher Chronicles is a game that tries to be a lot of things. It has a crafting system, a farming mechanic, cooking recipes, fishing, and even brewing. On top of this, it’s a game where you are encouraged to explore to your heart’s content. Cut down trees, chop up grass, expel the murk and find hidden caves and stashes of treasure, it’s all open to you.

Lean into one of the game’s many professions by being a tailor, a carpenter, a chef, or just head around to the various towns to help out through side quests. There’s so much to do in Yonder, it’s almost overwhelming.

The excitement of it all is extremely powerful in those opening hours. It feels like a game that could never end. While that feeling diminished somewhat as time went on, I still find myself playing for vast stretches of time, if only to escape into this beautiful and relaxing world.

The only real problem with all of these mechanics is the fact that they all feel somewhat standard once you get into them. Everything from the farming, to the fishing, all works really well but lacks a lot of depth.

That being said, I have to reiterate that what’s here does work very well. The fishing, for example, uses a simple but insanely effective control scheme to create one of the best fishing minigames I’ve ever encountered in a game.

You’ll grasp the main concepts for each profession pretty quickly, and you’ll want more options, more customization, and more depth, but the game just doesn’t go that deep into any of them. It’s nice that it’s simplistic, but more options would have been welcome if only to keep the gameplay consistently interesting and offer a reason to specialize in specific professions.

One area where Yonder: The Cloud Catcher Chronicles shines is its unique trading system. Instead of a standard currency, people you trade with in Yonder will offer specific values for your items. If you want something worth 200, then you’ll need to trade enough items to meet that value.

The items will vary in value based on a number of factors. For starters, crafted items are always worth more, but specific towns will offer more or less based on the supply of specific items. A town on the beach won’t get too excited about fish, but they may offer a lot more for your wood and planks than the town inland by the forest.

The trading mechanic is unique, and while everything else works really well, it may not be complex enough to keep you coming back for months into the future like some other games in this genre.

While some may say that the lack of combat is a downside, in this particular instance, I think the game stands out more as a result of ditching fighting and leveling. I think combat would have taken away more than it would have added to the game. As it stands, Yonder: The Cloud Catcher Chronicles is a very relaxed game with a lot to do. Adding combat, and by extension, tension would have shattered the atmosphere.

While the mechanics don’t have quite as much depth as I would like, the look and feel of the game is both relaxed and engaging. The sense of discovery and exploration feels great, and all of that contributes or an experience that, on the whole, feels really good and is a lot of fun to play. Yonder: The Cloud Catcher Chronicles is a visually stunning game. The environments are all colorful and vibrant, and the various areas all have a distinct style and biome that helps them stand out.

Little touches like day and night cycles, along with the ability to plant seeds when you cut down trees make the whole world feel like it’s a living and breathing place. The local creatures also come in a variety of shapes and sizes. You can interact with them in simple ways and domesticate some of them at your farms as well.

The character models in the game are pretty simple and the character creator doesn’t offer a huge amount of customization, but they still come across as fairly expressive through the writing and cheerful sounds they make during dialogue.

The game also runs at an incredibly smooth frame rate, which isn’t a requirement, but it does add to the tranquility of it all. Knowing that the game won’t crash or stutter is comforting, and the lack of combat solidifies the atmosphere that it’s going for.

If you’re tired of games that stress you out or seek to overload your adrenaline levels, Yonder: The Cloud Catcher Chronicles is a welcome change of pace. It combines a lot of different elements to great effect and even though it doesn’t quite have the depth one would expect from some of its mechanics, it’s an engaging and gorgeous experience nonetheless.

I would recommend it to anyone looking to lose themselves in a new world that won’t try to kill them at every turn. If that sounds nice, Yonder: The Cloud Catcher Chronicles is right up your alley.

A copy of Yonder: The Cloud Catcher Chronicles was provided to PS4 Experts for review purposes